The IBGE released today (7) the Environmental-Economic Accounting for Land: Physical Accountability, an unprecedented survey that unveils the changes in the stock of that resource in Brazil between 2000 and 2020. The publication is based on the results of Monitoring Land Use and Cover, carried out and released in this period.

The analyses of the publication show the change dynamics, highlighted by the outskirts of Amazon, MATOPIBA, south of Rio Grande do Sul and the stretch that includes the west of São Paulo and east of Mato Grosso do Sul and Goiás. “These conversions are unequal in the territory. In some areas they advance a lot and, in others, they are limited by special areas like Conservation Units and Indigenous lands,” explains Batista.

Among the Federation Units, the largest expansion in areas of pasture with management was in Pará: more 87.8 thousand km2 in 20 years. It was followed by Mato Grosso (45.9 thousand km2) and Rondônia (35.9 thousand km2). In the same order, the three states registered the biggest reductions of natural vegetation: 123.3 thousand, 97.8 thousand and 40.8 thousand km2, respectively. 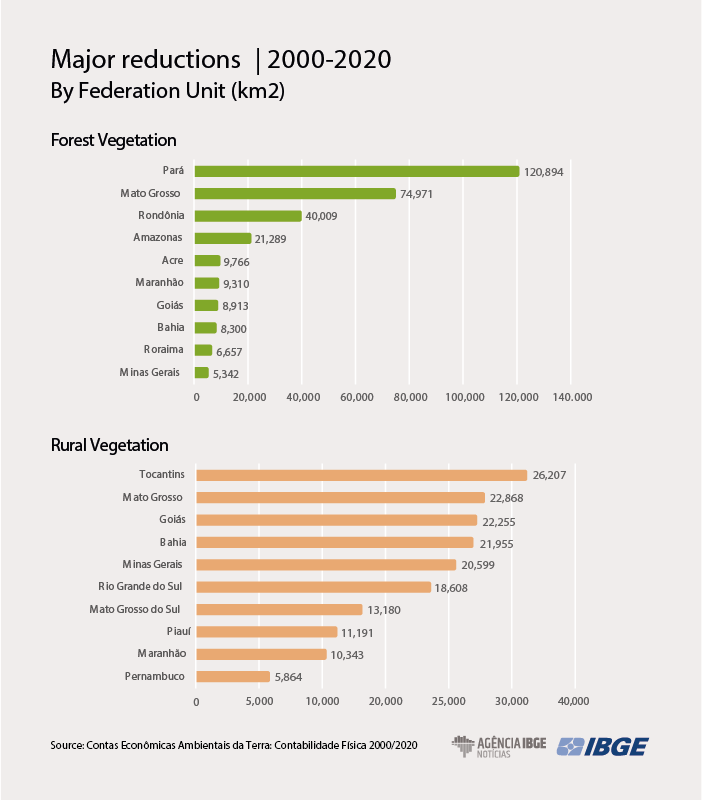 In Pará, natural vegetation retracted by 123.2 thousand km2, whereas in Mato Grosso the reduction was of 97.8 thousand and in Rondônia, 40.9 thousand. “An expansion of pastures with management from the Central-West Region to the North Region can be noticed,” explains Batista. In the agricultural areas, the largest expansions were in Mato Grosso (56 thousand km2), São Paulo (23.8 thousand) and Goiás (21.3 thousand).

Silviculture advanced mainly over areas of rural vegetation, mosaic of occupations in forest area and pasture with management. The largest expansions were in Mato Grosso do Sul (7.8 thousand km²), Minas Gerais (6.6 thousand km²) and Rio Grande do Sul (4.8 thousand km²).

Between 2018 and 2020, land use has changed an area equivalent to Alagoas and Rio de Janeiro

The updating of “Monitoring Land Use and Cover in Brazil” was also released today, including the territorial changes in Brazil between 2018 and 2020. In this period, 70 thousand km2 of the national area suffered some kind of change, corresponding to 0.7% of the national territory or an area equivalent to the states of Alagoas and Rio de Janeiro together. The major change was the advance of agricultural activities over natural vegetation.

Some Brazilian regions stood out: center-north of Mato Grosso; east-northeast of Pará; borders of Rondônia, Acre and Amazonas; Savannah region of Roraima; MATOPIBA; west of São Paulo and east of Mato Grosso do Sul, Goiás and Triângulo Mineiro; as well as the south of Rio Grande do Sul. Monitoring Land Use and Cover aims at spatializing and quantifying land use and cover in Brazil at regular periods, based on systematic mappings. The methodology involves visual interpretation of satellite images, field campaigns and consultation to complementary information. The data are released in Statistical Grid, which covers the Brazilian territory in 1 km2 cells. As by-products, maps, graphs and tables are made available with statistics that comprise the Physical Accounts and the Matrix of Changes occurred in the periods under analysis.

IBGE updates databases of the “Ecosystems Accounts: Land Use in Brazilian Biomes”

The IBGE also releases today the updating of the databases of the Ecosystems Accounts: Land Use in Brazilian Biomes, another step of the project of including Brazilian environmental indicators in the National Accounts. The study, based on summary data of Monitoring Land Use and Cover, shows an analysis of the extension of natural and anthropized areas in the biomes, taking into account conversions of land use in the 2018-2020 period. The entire adjusted time series is also available.

Interactive consultation of data and by-products can be made through the Environmental Information Database and the Interactive Geographic Platform.