The proportion of households in which residents undertook at least one trip dropped from 21.8% in 2019 to 13.9% in 2020. It hit 12.7% one year after that. The total expenses in domestic trips with overnight stay added up to R$9.8 billion in 2021, a drop in relation to the total registered in the previous year, when R$11.0 billion had been spent.

“The results reflect the impacts caused by the pandemic on the behavior of people in relation to tourism activities. Trips dropped 41% between 2019 and 2021 and this drop hit every income class. The year 2021 was even worse for tourism than 2020,” points out Flávia Vinhaes, an analyst of the survey. In 2019, 20.9 million trips were undertaken and, in 2021, 12.3 million. 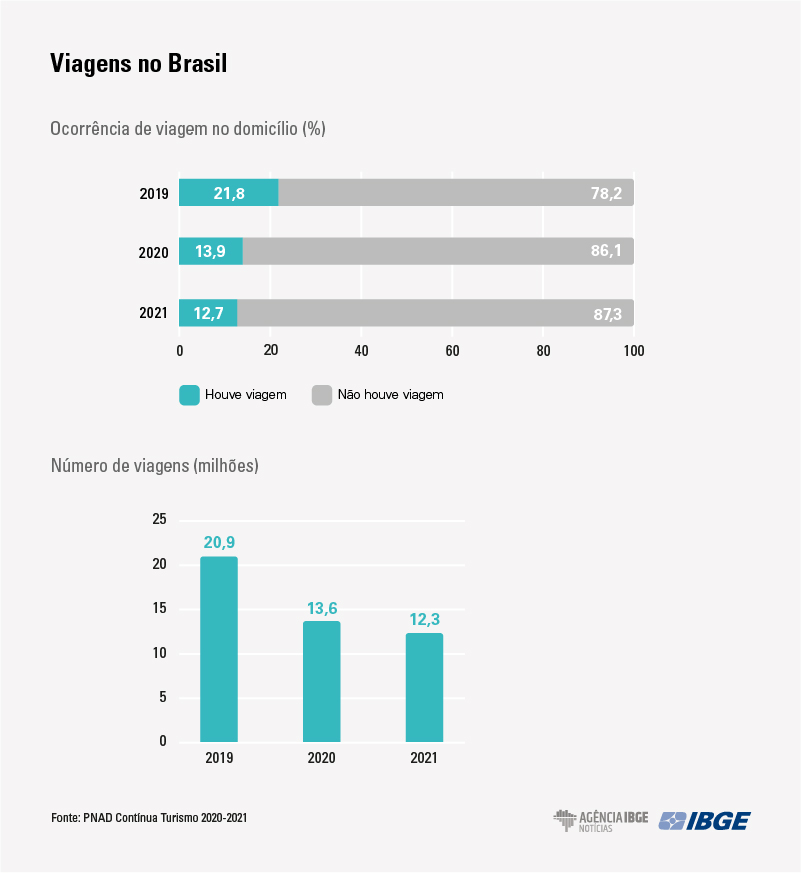 She highlights that although lack of money is still the main reason for not traveling, the share of this answer dropped, hitting 30.5% in 2021, whereas 20.9% selected the Other option. That category includes the reasons related to the pandemic, like the impossibility of catching a flight, need for social isolation or infection by the virus in the period. In nearly half (49.2%) of the households whose residents did not travel in 2019, the reason for not traveling was lack of money.

The shortage of resources as a reason for not traveling drops as per capita household earnings grow. Among those persons who earn up to half minimal wage, lack of money was pointed by 44.4% in 2021. That percentage was even higher in the previous year: 47.9%. Among those who earn four minimum wages or more, lack of money appears in the penultimate position among the reasons alleged for not traveling, only behind of health problems, which were mentioned by 2.8% of the interviewees of this group. In 2021, the most pointed reason by persons of that income class was Other (44.8%), followed by no need to travel (15.0%).

“The Other category gained relevance with issues related to the pandemic. Households with higher earnings were more concerned with the health crisis as a deterrent for traveling. In 2019, the main reason for not traveling in this group was lack of time,” says Vinhaes. In 2021, lack of time was mentioned by 12.7% of the residents of households with higher earnings and by 8.3% of the total number of interviewees. 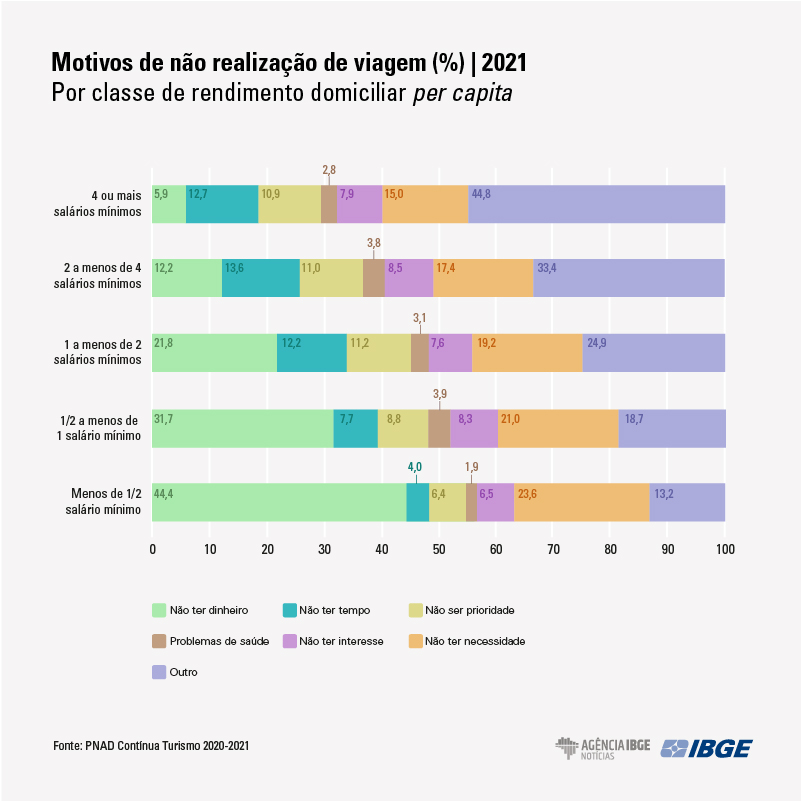 The analyst of the survey points out an increase in the contingent of households with earnings lower than one minimal wage in 2021, reaching 43.3 million. In 2019, 40.7 million households were within that income range.

“PNAD - Earnings from all sources also registered a drop in the per capita household monthly average earnings between 2019 and 2020. Although those households fit lower income classes than in 2019, the absence of travel was not attributed to lack of money more than that year.  It could be due to Covid-19 as some persons managed to attribute the absence of travel to social distancing or to some difficulty to travel during the pandemic,” says Vinhaes.

The proportion of international trips dropped from 3.8% in 2019 to 0.7% in 2021. Of the 12.3 million trips surveyed last year, 99.3% were domestic ones. In 2020, trips inside the country represented 98.0% of the 13.6 million trips detailed in this survey. According to the analyst, that data is related to other indicator: the means of transportation used by travelers.

“A significant characteristic in the trips surveyed is that most of them is undertaken by car, either personal or corporate. In a country of continental size like Brazil, it is not common a person leave the country by car. In general, they travel inside the region where they live or even in the same state,” points out her.

In 2021, private or corporate cars remained the main transportation in trips (57.2%), followed by coach (12.5%). When it comes to the income class, the share of plane grows as the household income increases. In households with per capita household earnings of up to half minimal wage, planes were the means of transportation used in only 4.3% of the trips. That percentage rises to 21.1% in the households with per capita household earnings of four minimal wages or more.

In households with lower income, 35.1% of trips were for health treatment

In 2021, nearly 85.4% of the trips were for personal reason, whereas 14.6% were for professional reason. The main personal reasons of trips are leisure (35.7%), visits to relatives and friends (32.5%) and health treatment (19.6%). The last category includes itineraries to medical consultations, hospitalization or surgeries and psychological care.

Leisure prevailed as the reason for traveling among the households with per capita household earnings equal or higher than one minimal wage. In homes with per capita income of four or more minimal wages, more than half (57.5%) of those personal trips were due to leisure.  However, another priority appeared among the income classes of half minimal wage: 35,1% of the trips were destined to health treatment. Visits to relatives or friends appears in the second position for that group (31.4%), and only 14.3% of them were due to leisure.

“Visits to relatives or friends remains quite significant in all the income classes, whereas leisure appears more in the higher income classes. Health treatment, which is quite significant among the reasons for trips of classes with lower earnings, can be explained by the need to displace people who live in small cities, which are not structures for surgeries and other types of treatment, Classes with higher earnings, in turn, are concentrated in large urban centers, which usually have a more diverse health structure,” says the analyst of the survey. Health treatment represents the motivation of only 4.4% of the personal trips among the households with earnings of four or more minimal wages.

While more than half (55.6%) of the trips due to leisure were searching sun and beach destinations in 2020, this figure fell to 48.7% in the second year of the pandemic. Other 25.6% looked for nature, ecotourism or adventure, a higher percentage than that recorded in the previous year (20.5%). “That could also be influenced by the health issues of the pandemic. Many people could look for leisure options with less agglomeration, like trails and waterfalls, instead of traveling to beaches, where more people concentrate,” states Vinhaes. Trips due to culture and gastronomy, accessing cultural and historical heritage, appears in the third position (16.0%).

In 2021, one out of five trips was for the state of São Paulo

The main accommodation reported by interviewees in 2021 was the house of friends or relatives (42.9%). In 2019, it already appeared as the option of nearly half of the trips (47.2%). Last year, it was followed by Other category (28.2%), which includes houses of support, hospitals, sailboats and workplaces, among other types of accommodation. The option hotels, resorts or flats was selected by 14.7%.

That category was the main type of accommodation among those who traveled for professional reason in 2019 (45.5%). In 2021, that percentage fell to 28.3%, standing behind Other (38.8%). “The decrease in the use of hotels and flats in trips undertaken for professional reasons is probably related to the health crisis. Those persons who previously used hotels managed to use the home of friends or relatives,” says the researcher. In 2019, the house of friends or relatives had been the type of accommodation of 15.5% of the business trips, a percentage that rose to 20.7% in 2021.

The survey also points out that the most visited regions in Brazil were the Southeast (40.9%), Northeast (28.2%) and South (17.3%). A significant part of the displacements occurred inside the same region or even in the interior of the states. São Paulo appears in the first position among the most popular destinations for domestic trips, concentrating 20.6% of the Brazilian travelers. That state was followed by Minas Gerais (11.4%), Bahia (9.5%), Rio de Janeiro (6.6%) and Rio Grande do Sul (6.5%). 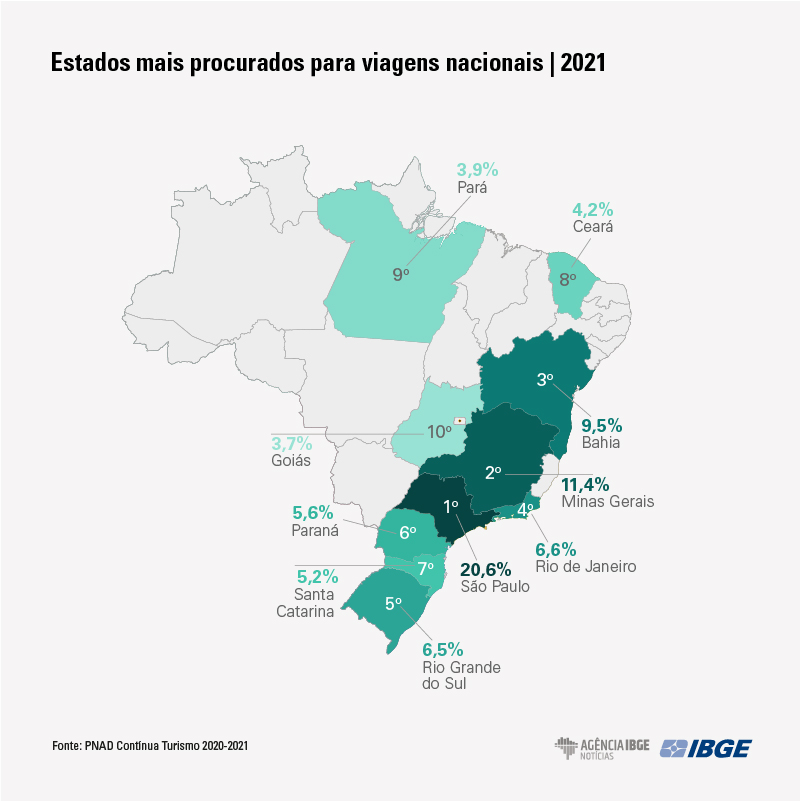 For the first time ever, PNAD Tourism raised the data related to the expenditure in the sector. The total expenses in domestic trips with overnight stay added up to R$9.8 billion in 2021, a drop in relation to the total registered in the previous year, when R$11.0 billion had been spent. São Paulo accounted for 18.2% of all the expenditure with tourism last year in Brazil, adding up to R$1.8 billion. That state was followed by Bahia (R$1.1 billion), Rio de Janeiro (R$1.0 billion) and Santa Catarina (R$864 million). 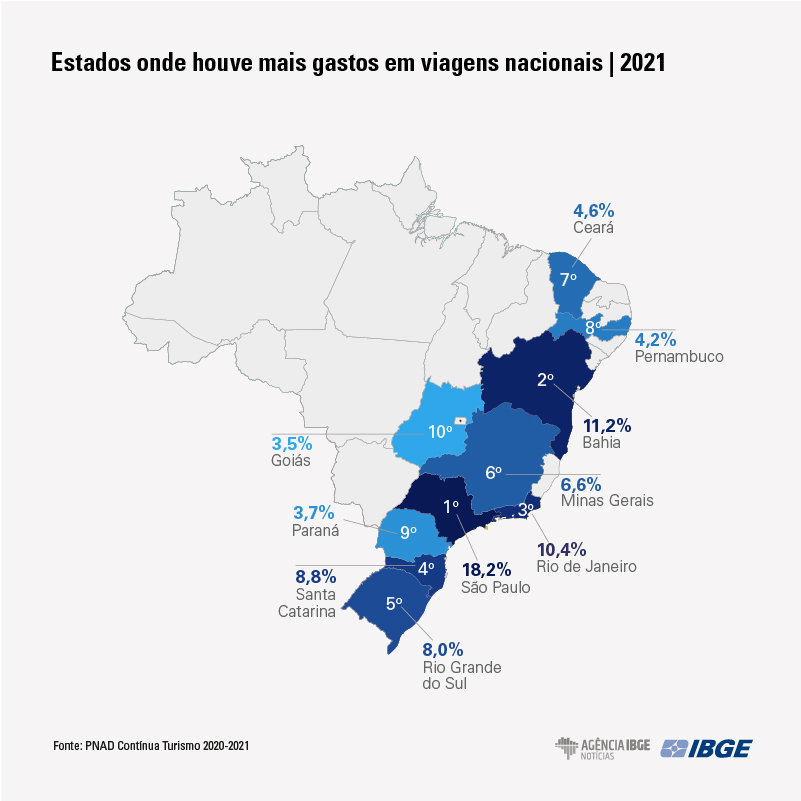 “These indicators are a very important feature as they help to measure the impact of tourism in destinations, accommodation and transportation. On the whole, expenditure with tourism in trips with overnight stays dropped between these two years, which is related to the drop in the trips in the period. Nevertheless, the per capita average expenditure grew, i.e., the value spent per day by travelers in a certain destination increased from R$180 to R$204 in a year,” says Vinhaes.

The per capita average daily expenditure was higher in the Federal District (R$292), followed by Rio de Janeiro (R$288), Santa Catarina (R$257) and Alagoas (R$248). The total average expenditure of the domestic trips with overnight stays was estimated at R$1,331. These expenditures are quite impacted by the number of participants in the trips. In the case of the per capita expenditure, the average was R$799.

Accommodation was responsible for most of the expenditures undertaken in the trips. On average, the expenditure was R$1,292, whereas that of food was R$501 and that of transportation, R$442.

PNAD Tourism quantifies the flow of domestic tourists between the different Brazilian regions and abroad. In 2020 and 2021, expenditures and characteristics of the trips undertaken were raised, associated with other variables, including per capita household earnings. The Tourism subject has been investigated by Continuous PNAD since 2019, by means of a partnership between the IBGE and the Ministry of Tourism. The survey data can be access on Sidra. 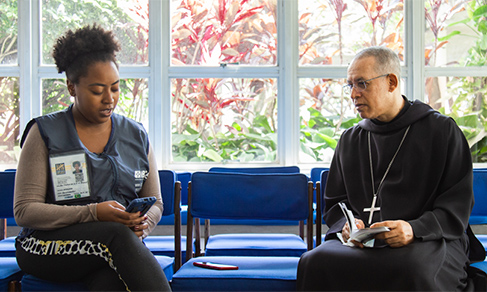 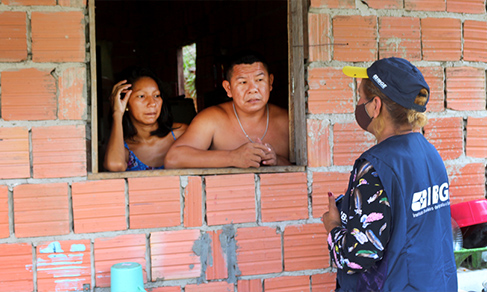 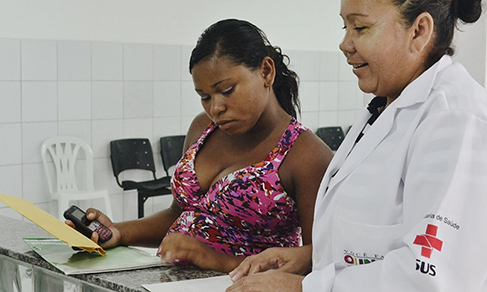