Compared with the previous year, the number of divorces granted in Brazil fell 13.6% in 2020. In 2019, the drop had been of 0.5%, interrupting three consecutive years of growth. With the retraction, 331.2 thousand divorces were accomplished in 2020, the lowest figure since 2015. Released today (18) by the IBGE, the data comprise the Statistics of Civil Registry and they complement the information releases in November last year.

“The significant drop can be explained by the difficulties to collect the data due to the distancing working adopted during the pandemic. Also, there is no confidence that the production of sentences in the courts remained the same with social distancing. Many legal actions may be delayed in that period, which could contribute to reduce the number of divorces in 2020. It was a unusual year,” says Klívia Brayner, manager of the Statistics of Civil Registry. The difficulties in the data collection also justify the postponement of the release of the divorce data, as explained in the technical note also published today.

While legal divorces dropped 17.5% in a year, out-of-court divorces, i.e., those registered in civil registry offices, increased 1.1%. According to the manager of the survey, some people may have looked for civil registry offices due to the difficulties to access legal courts during the pandemic. Yet, not all divorces can be made through administrative procedures.

“There are criteria for out-of-court divorces. They need to be consensual and, in most states, they cannot be made whenever the couple has children under age,” explains the researcher. 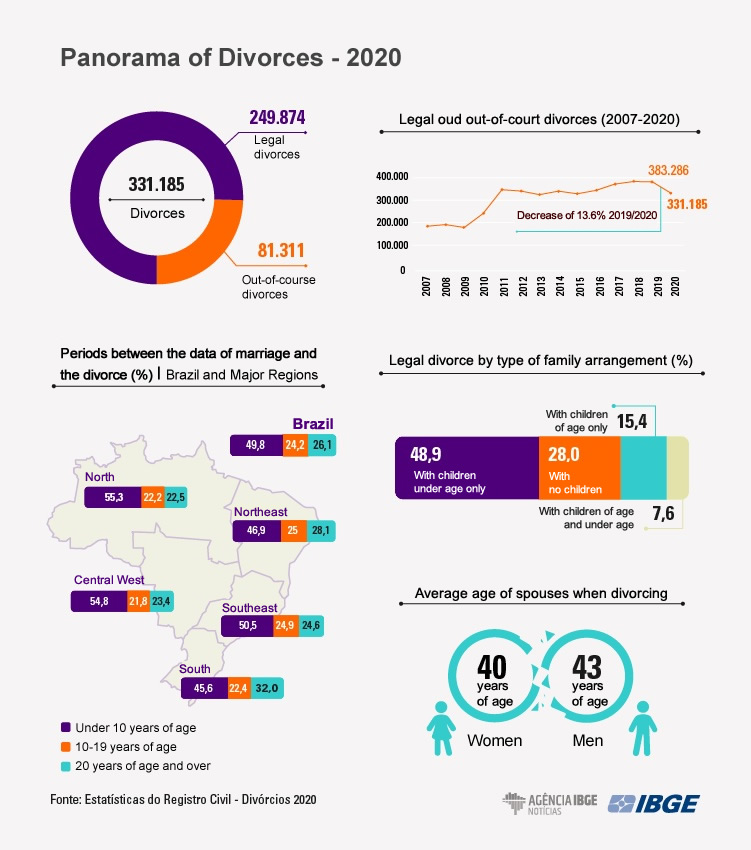 “It points out that marriages are getting shorter. In some places, like in the South, they are longer. Taking a look at the time series, one can perceive the increase in the percentage of marriages that end before ten years in the majority of regions. It is a cultural change, of customs and values. Marriages are no more seen as something that lasts forever and having children is not a deterrent factor to divorces anymore. There is a legal facilitation as well, which should have followed the cultural changes, like divorces made in civil registry offices and legal modifications for a new marriage,” notices Brayner.

The South shows the lowest percentage of marriages that last less than ten years (45.6%). On the other hand, the North shows the highest one (55.3%). In that region, only 22.5% of the divorces involve people who were married for more than 20 years. The South also registers the highest average time between the dates of marriage and divorce: 14.7 years. Ten years before, that average was 16.9. In Brazil, the average time between marriage and divorce dropped from 15.9 years in 2010 to 13.3 in 2020.

Besides the decreasing time between the dates of marriage and separation, the percentage of divorces among persons with children under age has grown. In 2020, more than half of the legal divorces (56.5%) occurred among persons who had children under age. In contrast, the percentage of divorces among partners without children decreased from 29.7% in 2010 to 28.0% in 2020.

The responsibility for the custody of children is another point raised by the survey.  Between 2014 and 2020, the proportion of divorces with shared custody increased from 7.5% to 31.3%. In 2014, Law 13,058 established that this type of custody should be the standard, unless either one of the parents relinquishes it or has no conditions to exert it. “Although women are still the major responsible partner, there is a trend to increase the shared custody. So it is possible to notice that the law is being observed,” says the researcher. 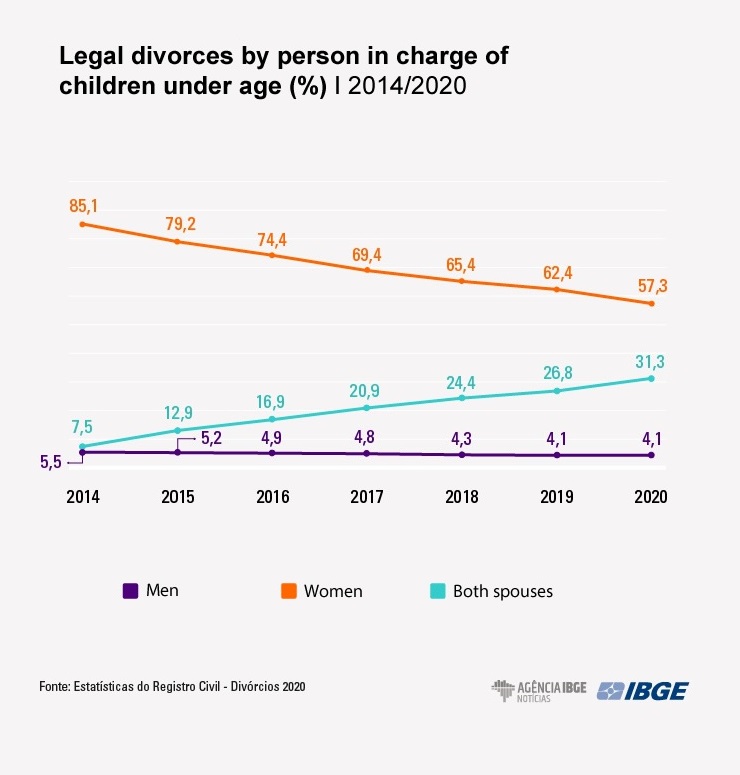 The dissemination of divorce data meets the recommendations of the United Nations Statistics Division (UNSD) to include such figures in the vital statistics, which also comprise information on births, marriages and deaths. The divorce data are part of the set of vital statistics requested by that division to the member countries and comprise the Statistical Yearbook yearly publication.

“The survey aims at collecting information on divorces and following up the social dynamics in relation to official marital arrangements, like marriages and divorces. Based on these data, it is possible to understand the social aspects and the changes of behavior of the society,” explains Brayner.

More on the survey

The Vital Statistics present information on vital facts occurred in Brazil, gathering the total number of records of live births, deaths and fetal deaths, as well as on marriages, informed by the Civil Registry Offices of Natural Persons, and divorces reported by Family Courts, Forums, Civil Courts, Mobile Justice, Judicial Centers for Conflict Resolution and Citizenship (CEJUSCs) and Notary Public Offices. The data are available on Sidra and IBGE Cidades.