Death records increase by 14.9% in the first year of the pandemic and hit highest level in the series

The year 2020, which marks the start of the Covid-19 pandemic in Brazil, had a total 196 thousand more deaths than 2019. The change, of 14.9%, was the biggest since 1984, according to civ records in civil registry offices. Births and marriages have remained on an upward trend as observed in the last few years, but marriages declined far beyond the average: 24.6%.

These data are part of Vital Statistics, released today (18) by the IBGE, a survey that presents data on births, deaths and marriages from more than 7,900 Civil Registry Offices for Natural Persons (RCPN). Data on judicial and extrajudicial divorces, relative to year 2020, will be released at a later date.

“The rise in the number of deaths between 2019 and 2020 was very unusual when compared to that movement in previous years. Considering results since 1984, although some of the previous series are not comparable with the current ones, because the index of underreport was very high, it is possible to observe never before there has been a change above 7% over the year. In general, the increment used to be below or around 3%. From 2010 to 2019, the average change was of 1.8%,” says the survey manager, Klívia Brayner. 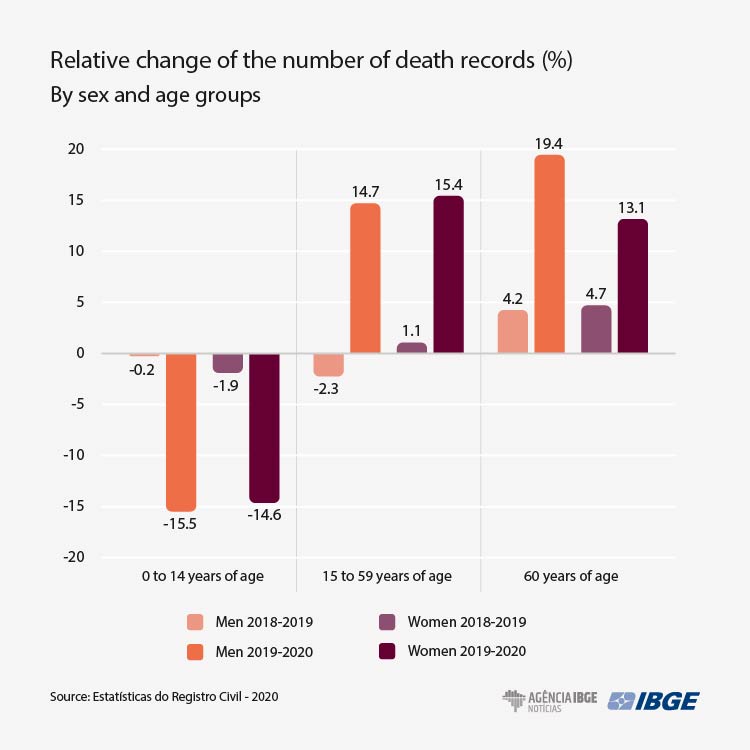 “There was significant increase of deaths due to natural causes, which is related to the epidemic scenario. On the other hand, the fact that children and teenagers stayed mostly at home seems to have significantly reduced deaths of persons up to 15 years of age, maybe due to reduced exposure to pathogenic agents or external risks,” Ms. Brayner explains.

“Men, in general, have a higher mortality rate, mainly in the group aged 20-24. In 2020, for example, a man that age had 2.1 more changes of dying due to natural causes than a woman. In the case of external causes, such as homicides or accidents, that difference reached 9.6 times. With the advance of age, male excess mortality decreased,” says Ms. Brayner, as she adds these indexes did not change significantly between 2018 and 2020.

Birth records fell by 4.7%, second year of decrease in a row

“We had already noticed a trend to decrease in birth rates. In 2016, year of the zika virus epidemic, there was a more significant decrease, above 5.0%. But, in 2019, When there was no equal demographic event in terms of importance, there was also a reduction in the number of births. It is worth mentioning that in 2020, however, the pandemic may have aggravated the postponing of registrations, due to mobility difficulties in reaching registry offices. Maybe part of the decrease by 133 thousand birth records has only been postponed,” the researcher explains.

Number of marriages recorded the biggest decrease in the series

“Since 2015, the number of marriages has decreased, but the decline in 2020 may also be related to the social distancing measures, since many people probably delayed weddings due to the fact they would not be able to throw a party, for example,” Klívia Brayner highlights.

The number of marriages registered in registry offices fell in all the Major Regions, mainly in the Northeast (27.8%) Central West (27.7%) and Southeast (27.3%). 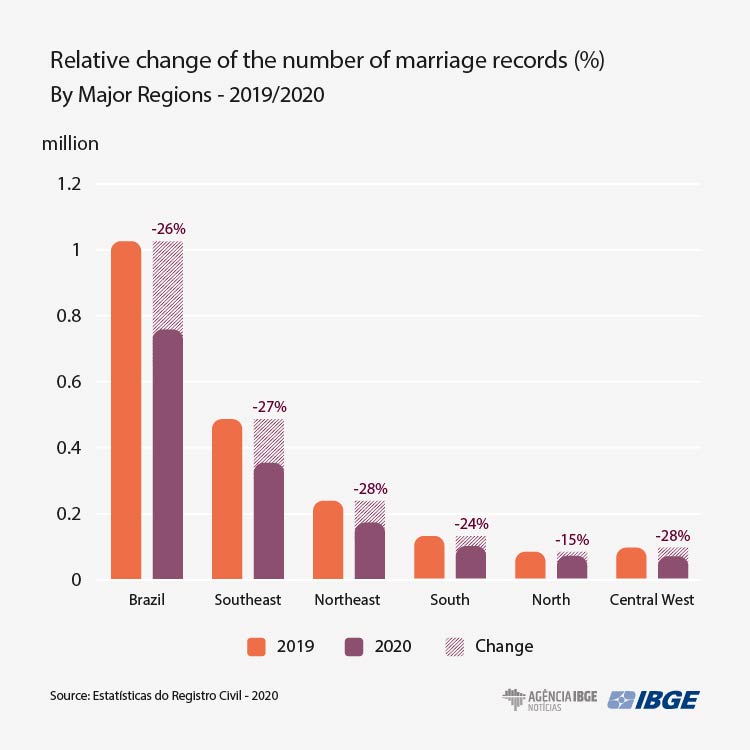 Vital Statistics gathers information on live births, marriages, deaths and stillbirths reported by Civil Registry Offices of Individuals, as well as divorce reported by Family Courts, Civil Courts and Notary Offices. As an exception, in this edition, the release of divorce records have been postponed. The released data are available at Sidra.