Proportion of households receiving money from other social programs in 2020 rose to 23.7% driven by Emergency Aid

The proportion of households where persons receive money from other social programs increased from 0.7%, in 2019, to 23.7% in 2020. This increase was due to the Emergency Aid, a benefit created last year in order to reduce the impacts of the COVID-19 pandemic among informal workers, individuak microentrepreneurs (MEI), self-employed workers and unemployed persons. These data come from Continuous PNAD 2020: Income from all sources, released by the IBGE.

Between 2019 and 2020, the proportion of households that received Bolsa família fell from 14.3% to 7.2%. According to the survey analyst, Alessandra Scalioni, this decrease waa due to the fact that part of the beneficiaries started to receive the Emergency Aid. “If a beneficiary from used to recive an amount below the Emergency Aid, they wuld start to be paid this benefit. So there was a migration of persons who received Bolsa Família to the Emergency Aid,” Ms. Scalioni explains.

The percentage of housing units that received Continuous Cash Benefit (BPC-LOAS), directed to persons with special necessities and that have no other way to make ends meet, with a change from 3.5% to 3.1% in this same period. The presence of this benefit was bigger in the households of the North (5.0%) and the Northeast (4.5%), as well as Bolsa Família: 12.9% and 14.2%, respectively. About 32.2% of the households of the North and 34.0% of the Northeast received money from other social programs, mainly the Emergency Aid.

“Historically, the North and Northeast were always the most benefited Major Regions considering Bolsa Família and other social programs. . In addition to that, employment in both Major Regions is more related to services and trade and, during the pandemic, these are the segments depending on clients and mostly affected by the pandemic. So the labor market of these activities was severely affected,” says the researcher. 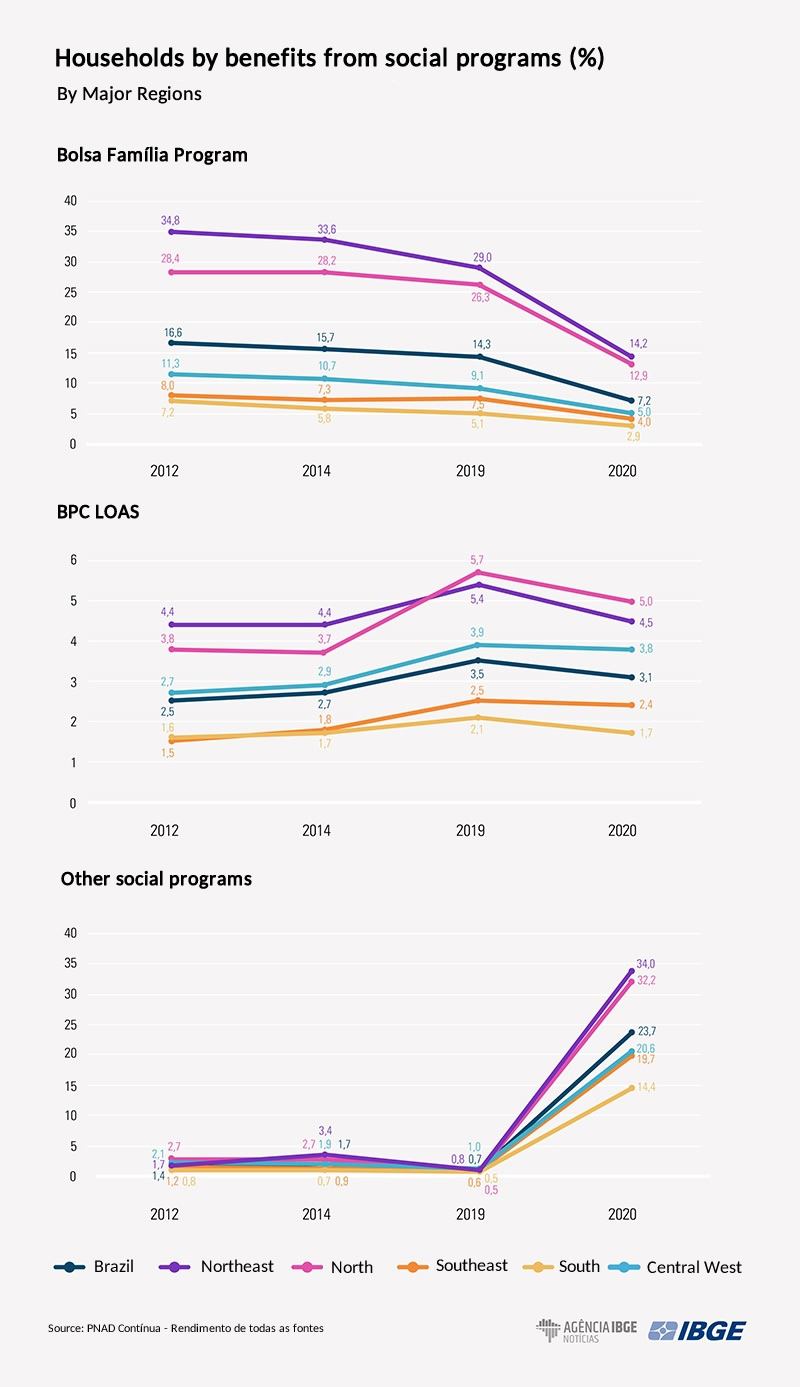 The Emergency Aid was listed under “other income”, which also encompasses gains from financial applications, employment insurance, unemployment benefit for artisanal fishermen and other social programs such as Bolsa Família. Considering the contribution from the Emergency Aid, the participation of other income in household income per capita reached 7.2%, biggest proportion in this category since 2012, start of the time series. In 2019, that proportion was of 3.4%.

In 2020, earnings from all activities comprised 72.8% of the average real monthly household earnings. The 27.2% coming from other sources (7.2%), were mostly from retirement pensions or other pensions (17.6%), rental and leasing (1.%) and alimony, donation or allowance from a non-resident (0.8%).

The category of other income was the only one to record increase in this comparison. “There has been a combination of factors. The labor market has been severely affected by the pandemic. Due to social distancing, some sectors that depended on the movement of persons, such as the sector of services, were the most affected ones. Labor itself has lost ground. That accounts for the decrease in participation of earnings from all the activities, which fell from 74.4%, in 2019, to 72.8%, in 2020,” the survey analyst highlights.

“On the other hand, Emergency Aid was paid, and that caused other income to have increased participation in the composition of hosehold income per capita. But income from work is still the main source of income of households,” the researcher adds. In the North, the participation of other income increased from 5.1% to 12.5%, whereas in the Northeast, it went from 5.5% to 13.7%. 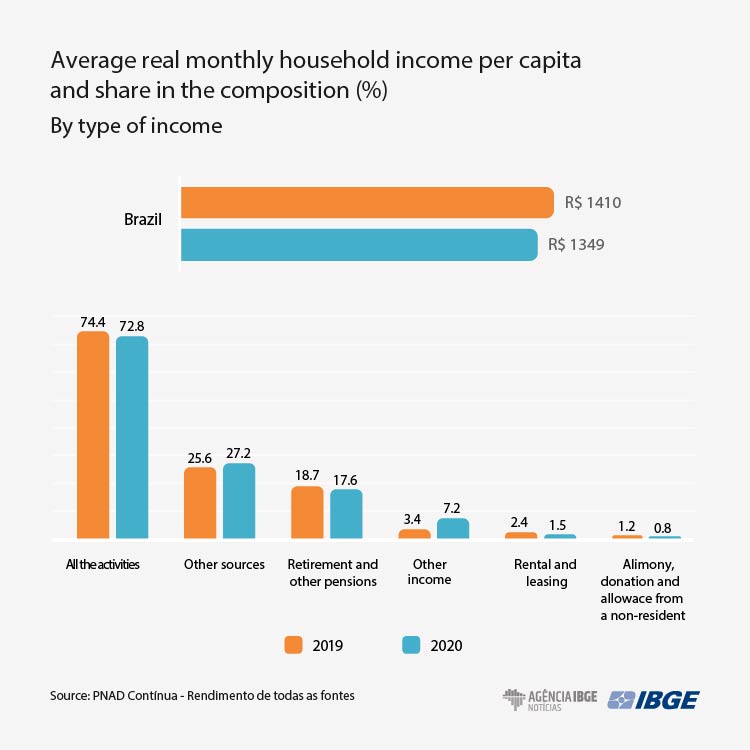 In 2020, the average real monthly household per capita reached R$1,349, meaning a decrease of 4.3% against the figure estimated in the previous year, when it was R$1,410. The only Major Regions that recorded increases in this figure were the North (R$896) and Northeast (R$891) and, in spite of that, they had the lowest income. The Southeast recorded the highest income (R$1,623), followed by the South (R$1,597)..

In the households where a resident was a beneficiary of Bolsa Família, the real average monthly household income per capita was of R$379 in 2020. For the beneficiaries of BPB-LOAS, income was of R$792 and, for those who received money from other social programs, of R$772. The latter, which includes households receiving the Emergency Aid, increased by 12.2% against the previous year.

“Only other income recorded an increase of the avergae income in the period. The real average household income per capita fell due to the decline of income sources. Although earnings have increased, there are fewer persons with this type of income, because there was a decrease in employment by 8.1 million persons between 2019 and 2020,” Ms.Scalioni says.

When we consider the stratification into ranges of percentage of persons in increasing order of household income per capita in 2020, half of the population with the lowest income earned R$453, on the average, an increase of 3.9% against 2019 (R$436).

“The average income in this range of income distribution has increased due to the Emergency Aid, because its beneficiaries are on the list. The other half of the distribution, which is that with the highest earnings, recorded a decrease,” the analyst adds.

Persons who belonged to the 1% of the population with the highest earnings had household income per capita of R$15,816. This figure is 34.9 times the earnings of half of the the population ith the lowest earnings (R$453). In 2019, this difference was the biggest in the time series (40 times).

The Northeast had the highest Gini index in 2020 (0.526) and the Southeast, the lowest (0.457). Against 2019, inequality measured by the Giniindex fell in all the Major Regions, with a highlight to the North and Northeast.

“The labor market is in worse conditions. Many persons have lost theur jobs, but the Emergency Aid eventually helped those with lower household income. That made income distribution in the country less uneven,” the analyst highlights. 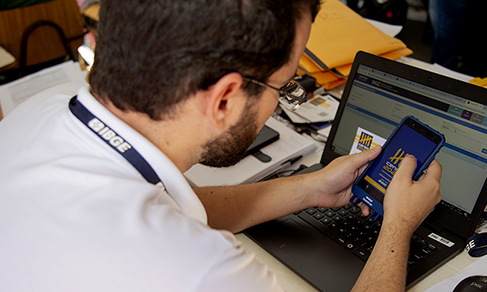 IBGE opens complementary selection processes with 353 positions for the Census May 25, 2022

The IBGE opens today (May 25) another simplified complementary selection process (PSS) for the temporary hiring of professionals who will work in...