Balance between open and closed enterprises returns to positive in 2019

Thiego Gonçalves Ferreira, manager of the survey, explains that the data should be viewed with caution, especially in the comparison with previous years, since the survey faced a change in the methodology that defines active organizations, due to the new registration system adopted by the federal government.

“The government established a new system of administrative records for bookkeeping fiscal, social security and labor obligations, the so-called eSocial, which is replacing RAIS. Some of the information that exists in RAIS left eSocial and, therefore, the IBGE needed to adjust the selection criteria of active organizations,” explains Ferreira.

He highlights that one of the questions not included in the eSocial system is that where the enterprises declare they exerted or not their activities that year. “It is possible that some enterprises are formally active, though not operating in practice. When the Statistics of CEMPRE was released, we have already pinpointed a unusual rise in the number of active organizations with no persons employed, which was not noticed in the same proportion when one looked at the enterprises with at least one person employed,” highlights him.

In 2019, the Central Register of Enterprises (CEMPRE) added up to 4.7 million active enterprises that employed 39.7 million people, being 33.1 million (83.3%) as salaried persons and 6.6 million (16.7%) as partners or owners. The salaries and other compensation paid by those entities added up to R$1.1 trillion, with a monthly average salary of 2.5 minimum wages, the equivalent to R$2,530.76. The average age of the enterprises was 11.7 years. Thiego Gonçalves Ferreira highlights that the surviving enterprises, in general, are bigger, as well as they account for most employments and pay higher salaries. That combination supposedly contributes to attract more professionals with higher education.

Balance of salaried persons was positive, with 595.5 new job positions

While in the dynamics of entries and exits of those entities the shares of employees with higher education were 8.4% and 7.5%, respectively, such share among the surviving enterprises was 14.7%, representing a difference of up to 7.2 percentage points (p.p.) between the events of survival and exit.

Concerning the distribution by sex, men accounted for most employment relationships in the active enterprises: 60.6% against 39.4% of women. The participation of women in the events of survival, entry and exit of those entities were, respectively, 39.3%, 41.3% and 42.7%.

Amapá has the lowest survival rate of enterprises and Santa Catarina, the highest one

The Demography of Enterprises unveils that reaching ten years is rather more difficult. Only 22.9% of the local units (branches) of the enterprises born in 2009 were still operating in 2019.

Among the states, Amapá (13.2%) has the lowest survival rate of enterprises in the 10-year period. On the other hand, Santa Catarina (30.6%) has the highest one.

“The microeconomic environment in which the enterprise is inserted, the human capital and the capacity to access credit are some of the factors that can explain the difference among the survival rates in each Federation Unit,” analyzes Thiego Gonçalves Ferreira. 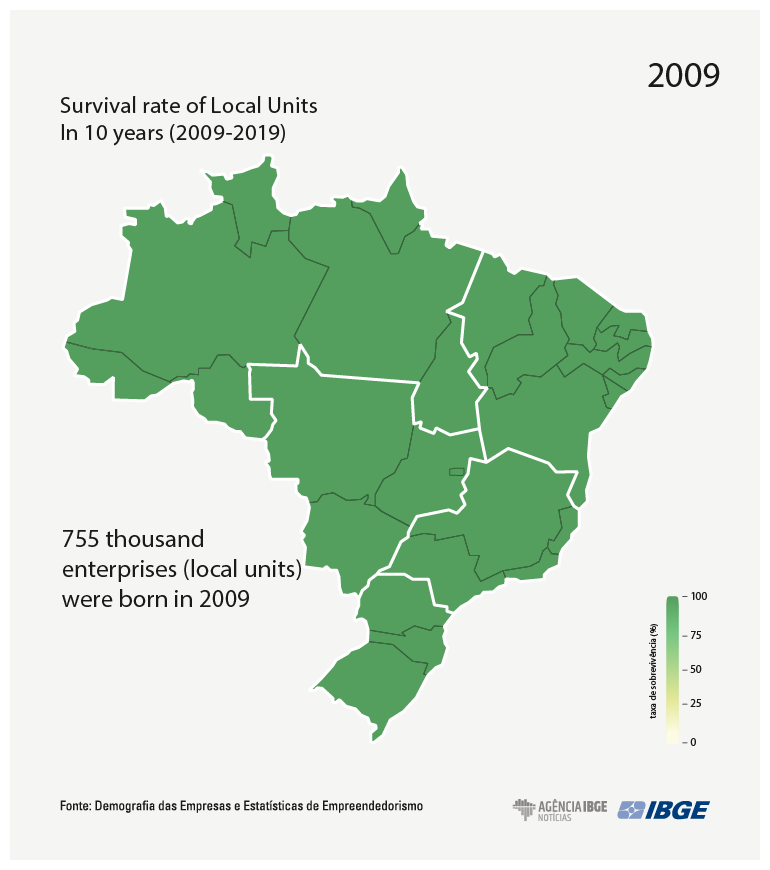 High-growth enterprises advance more than 10.0% for the second year in a row

In 2019, the number of high-growth enterprises advanced 10.0% over 2018, rising for the second consecutive year, though still insufficient to recover the losses of the five previous years. 35.2 thousand enterprises were high-growth enterprises in 2012, the peak in the time series. In 2019, those enterprises added up to 25.0 thousand, which employed 3.3 million salaried persons and paid R$94.6 billion in salaries and other compensation, with a monthly average salary of 2.5 minimum wages.

High-growth enterprises are those with at least 10 salaried employees and that registered an average growth of their personnel of at least 20% per year, for three consecutive years. It is considered that part of that growth is related to entrepreneurship.

“In spite of the growth recorded in 2019, the national economic scenario remains challenging for the enterprises to meet that criteria, since an average increase of 20% per year of the salaried employed persons for three consecutive years has been restricted to less and less enterprises. Another indicator of the challenge faced by the enterprises to meet that category is the reduction of their share in the contingent of those with 10 or more salaried persons. In 2008, high-growth enterprises represented 8.3% of the entities with 10 or more salaried persons, a proportion that continuously declined up to 2017, when it hit 4.5%. With the increase registered in 2019, that share rose to 5.4%,” comments Ferreira.