With rise in Services and Industry, GDP changes 0.4% in Q3

The Gross Domestic Product (GDP) changed 0.4% between the second and third quarters and, with this result, it reaches the peak of the time series, started in 1996. It is the fifth positive rate of this indicator in the comparison with the previous quarter. At current values, the GDP, which is the sum of final goods and services produced in Brazil, reached R$2.544 trillion. The data are from the System of Quarterly National Accounts, released today (1) by the IBGE.

Besides hitting the peak in the time series, the GDP stayed 4.5% above the pre-pandemic level, registered in the fourth quarter of 2019. In the third quarter, the positive change was influenced by the results of Services (1.1%) and Industry (0.8%), whereas Agriculture retreated 0.9%. 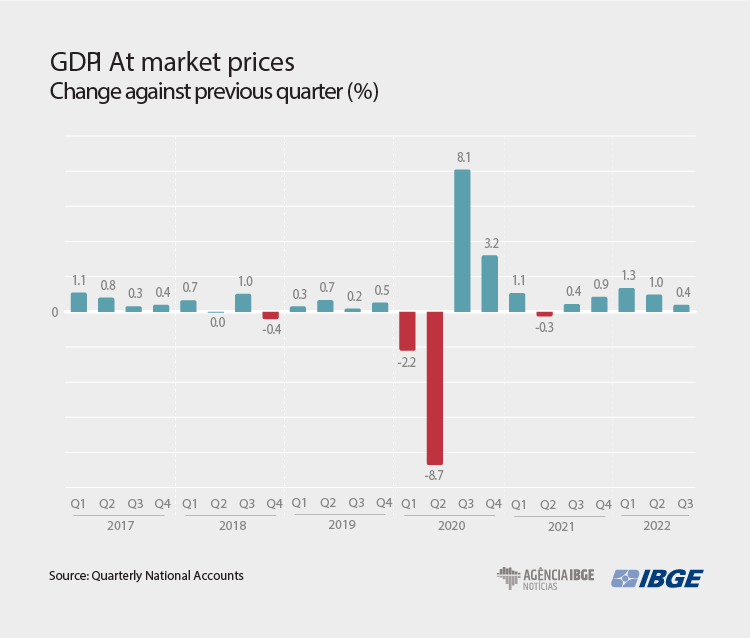 In Services, a sector that accounts for nearly 70% of the economy, the highlights were Information and communication (3.6%), with a rise in services of software development and Internet, Financial activities, insurance and related services (1.5%) and Real estate activities (1.4%). The segment of Other services activities (1.4%), which represents nearly 23% of the entire services and includes, for example, lodging and food, also grew.

“The other services activities have been recovering for some time with the upturn of on-site services, whose demand was withheld during the pandemic,” explains Rebeca Palis, IBGE´s coordinator of National Accounts.

As the only segment of services that stood on the negative side, Trade changed -0.1% in the third quarter. “This is a scenario that we have already been noticing in the IBGE´s Monthly Survey of Trade (PMC). This result reflects the relocation of household consumption from goods to services,” points out the coordinator.

Construction, which is among the industrial activities, advanced 1.1% in the period.  “This activity has been growing for four quarters and remains increasing, including employment. Another highlight in this sector is Electricity and gas, water, sewerage and waste management (0.6%), an activity that benefited from the reduction in the thermoelectric energy,” states her.

After three quarters with positive rates, Agriculture retreated 0.9%. “The retraction is explained by crops with relevant harvest in this quarter that reduced their output, like sugarcane and cassava. In the year, the performance of this sector is related to the results of soybeans, our major crop, whose output was affected by climate issues,” says Palis. In the cumulative index in the year, the agricultural sector fell 1.5%. 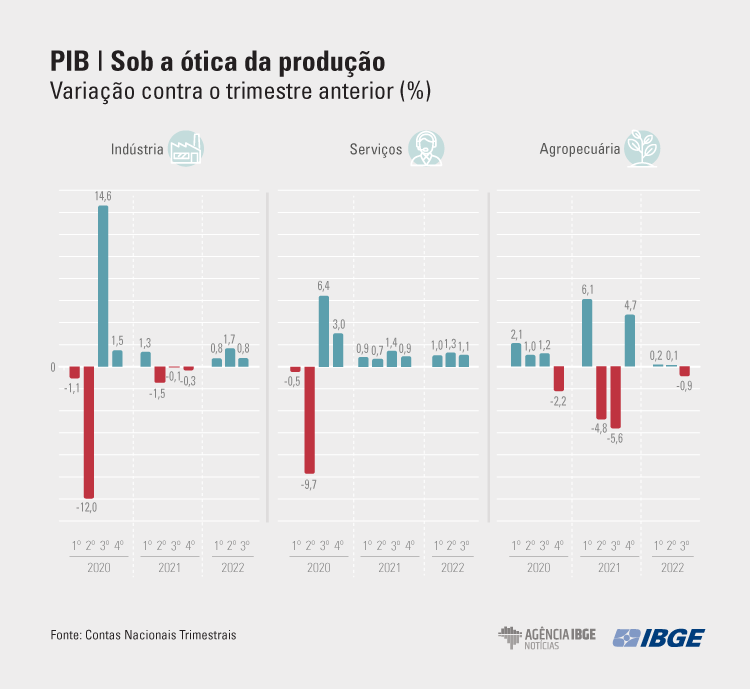 GDP advances 3.6% over the same period a year ago

The GDP rose 3.6% compared with the third quarter of 2021. Agriculture grew 3.2% and Industry, 2.8%. The industrial sector was mostly impacted by the activity of Electricity and gas, water, sewerage and waste management (11.2%), which benefited from the green tariff flags. Other activities that stood out in this sector were Construction (6.6%) and Manufacturing industries (1.7%).

In this same comparison, Services advanced 4.5%, highlighted by Other services activities (9.8%), Transportation, storage and mailing (8.8%) and Information and communication (6.9%).

Household consumption grew for the sixth quarter in a row. The increase was of 4.6% compared with the third quarter of 2021. “Such growth is related to the positive results of the labor market concerning earnings and employment, as well as to the governmental aids, like Brazil Aid, Taxi Driver Aid and Truck Driver Aid, policies of tax exemption and a lower inflation, though still high,” states Palis. In the same period, Government consumption grew 1.0%.

Also under the point of view of the demand, investments grew 5.0%, influenced by the rise in construction, software development and production and imports of capital goods. 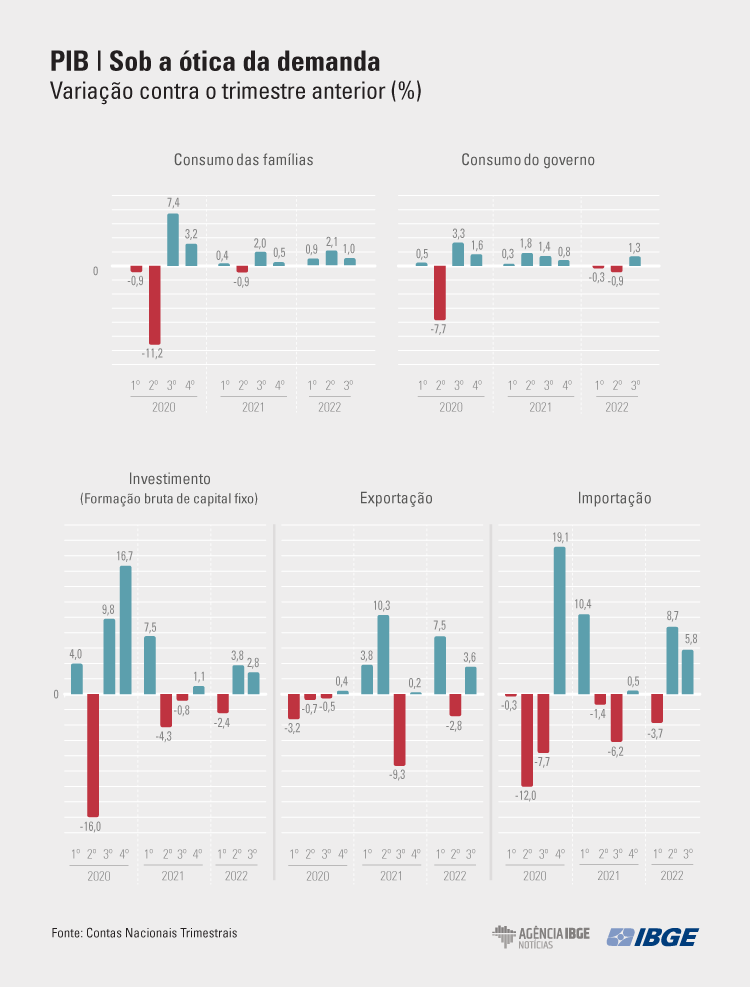 The System of National Accounts shows the current values and the volume indexes, on a quarterly basis, for the Gross Domestic Product (GDP) at market prices, net taxes on products, value added at basic prices, personal consumption, government consumption, gross fixed capital formation, stock change, exports and imports of goods and services. The survey began in 1988 at the IBGE and it was restructured in 1998, when their results were integrated to the System of National Accounts, of annual periodicity.