Social inequalities due to color or race remain evident in the labor market. Unemployment, underutilization and informality continue to hit more black and brown persons than white ones. In 2021, the unemployment rates were 11.3% for white persons, 16.5% for black persons and 16.2% for brown persons. In the previous year, these percentages were 11.1%, 17.4% and 15.5%, respectively. The data are from the Social Inequalities due to Color or Race in Brazil study, released today (11) by the IBGE.

“The black and brown populations represent 9.1% and 47% of the Brazilian population, respectively. Yet, the share of these population is lower in the indicators that reflect higher levels of life conditions,” says João Hallak, an IBGE analyst.

Unemployment and informality are higher among black and brown persons

“This indicator already shows a disadvantage of those populations when inserting in the labor market. The proportions of the black and brown populations among those unemployed and underutilized are higher than what they represent in the labor force,” highlights Hallak.

Informality also hits more black and brown persons than white ones. In 2021, the informality rate was 40.1%, though white persons had a lower rate (32.7%), and black (43.4%) and brown (47.0%) persons, a higher rate than the national average. This difference is maintained in the entire time series of the study. 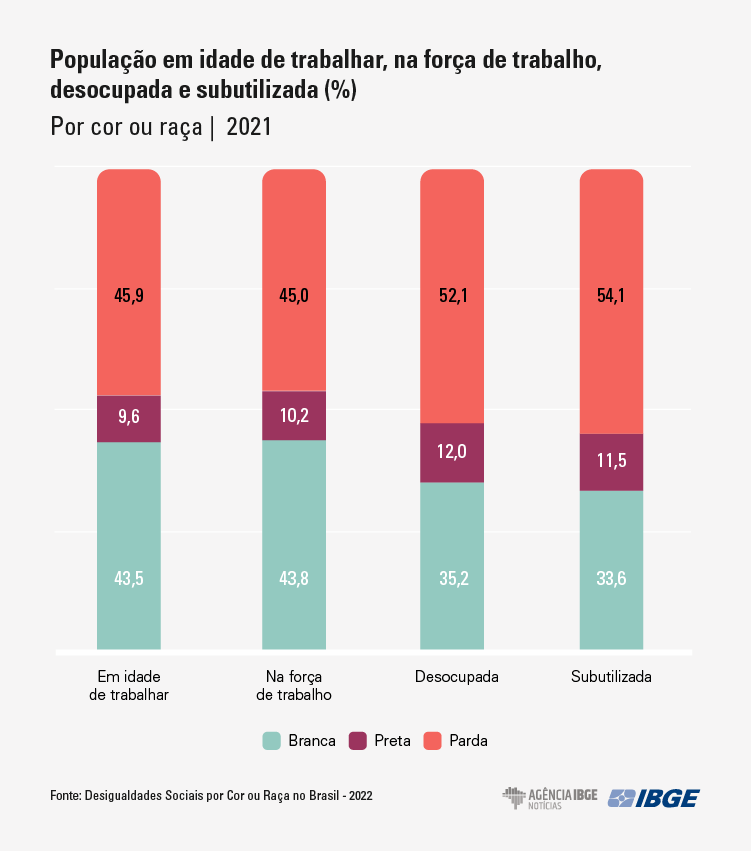 When analyzing the schooling level, inequality is even more noticeable. Last year, the average earnings of employed white persons was R$19.0 per hour, yet this value was quite lower for black (R$10.9) and brown (R$11.3) persons.  The study points out that the earnings are higher among those with higher schooling levels, though the differences by color or race remain in force. White persons with complete higher education or more earned, on average, 50% more than black persons and nearly 40% more than brown persons.

Employed black and brown persons were the majority (53.8%) in the labor market in 2021, though they were in only 29.5% of the managerial positions, whereas white persons occupied 69.0% of them. In higher income classes, only 14.6% of those employed in these jobs were either black or brown persons, whereas that proportion among white persons was 84.4%. 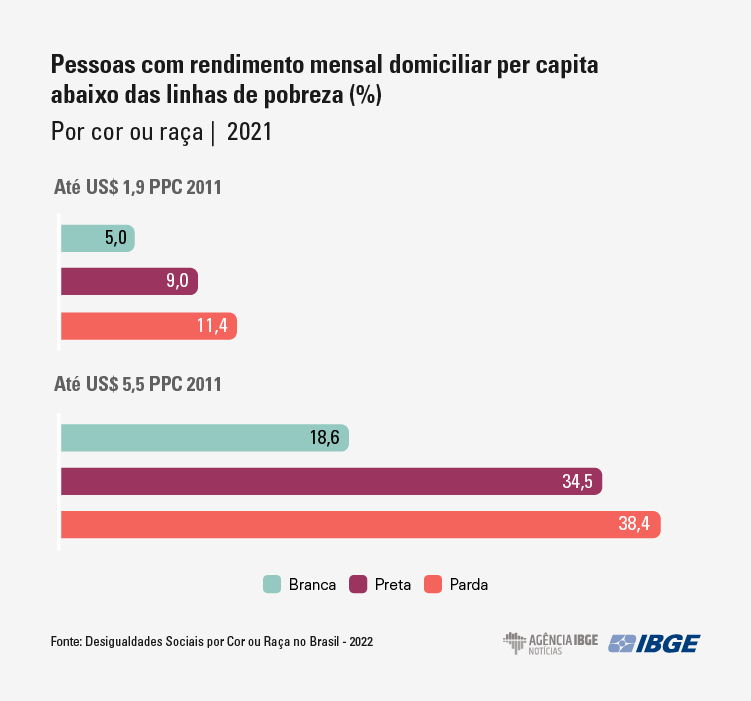 Concerning earnings from all sources, which also includes retirement and pension in addition to work, the difference remained as well. In 2021, the per capita household average earnings of the white population (R$1,866) was nearly twice that of the black (R$964) and brown (R$945) populations, a difference that is sustained since the beginning of the time series in 2012. Also last year, earnings were the lowest ones in the time series, with a higher drop for black (-8.9%) and brown (-8.6%) persons. Among white persons, the reduction in earnings over the previous year was of 6.0%.

Housing and estate conditions are very unequal among white, black and brown persons

Black and brown persons face a situation of greater tenure insecurity and informality of their houses. Among the population living in their own houses, 20.8% of brown persons and 19.7% of black persons lived in houses without title deeds, whereas the proportion among white persons was nearly half of it (10.1%).

One of the sources used in the study, the 2017-2018 Consumer Expenditure Survey (POF) pointed out the hypothetical rental value of owned houses according to the assessment of residents. Among the houses owned by white persons, the average value was R$998, whereas in those owned by brown persons the value was R$555 and by black persons, R$571.

“The houses of the black and brown populations have less access to sanitation and a lower number of rooms, reflecting in a lower value for these houses,” explains analyst Bruno Perez.

Concerning the ownership of durable goods, white persons were more present in nearly every item analyzed, except motorcycles. In addition, white persons had, on average, a bigger amount of goods as a proportion to the number of residents in their houses: 10.2% lived in houses with more than one car per adult. Among black persons, that proportion was 2.7% and, among brown persons, 3.5%. 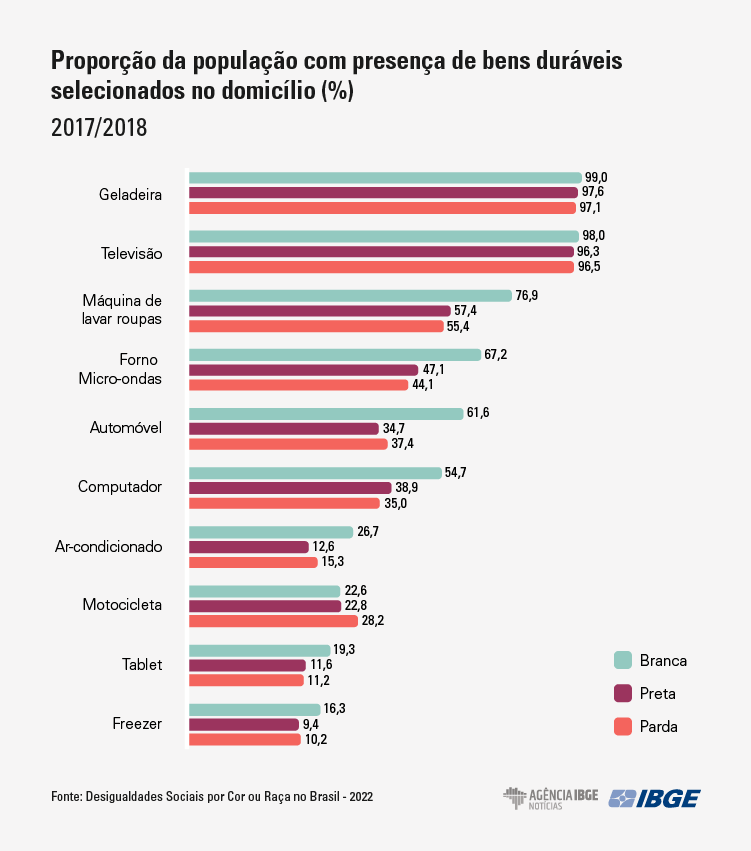 According to the 2017 Census of Agriculture, in agricultural establishments where producers were the owners, nearly half of them (48.0%) were white persons, whereas 42.7% were brown persons and 7.9%, black persons. When producers were not the owners, white persons were 34.5% of them, whereas brown persons (52.1%) and black persons (10.5%) had a higher representation.

There is a relationship between color or race of producers and size of properties. Black owners (13.7%) and brown owners (58.0%), together, are most of those who have an establishment with less than one hectare. Among owners of establishments with more than 10 thousand hectares, white persons represented 79.1% against 17.4% of brown persons and 1.6% of black persons.

61.0% of those enrolled in Medicine courses were white persons in 2020

The data about education raised in the study have as one of the sources PNAD Covid19, which went to the field between May and November 2020 and investigated this subject in its final month. According to the survey, unequal conditions of supply and access of off-site school activities were pinpointed due to the pandemic. The lack of structure and time dedicated to these activities jeopardized especially the students with lower income, most of them black and brown persons living in rural areas in the North and Northeast.

In November 2020, 6.8% of the white students aged between 6 and 17 years did not have any on-site class and did not receive any school activity. That percentage was 13.5% for black persons and 15.2% for brown persons. Among those who had not any on-site activity and did at least part of the school activities received in a reduced workload (less than five weekly days and less than two daily hours), the proportion of white students was also lower than that of either black or brown students.

“This indicator contributes to explain why the earnings from labor of black and brown persons are lower than those of white persons among those with higher education An example is the health area: in the Medicine course, 61% are white persons and in the Nursing course, 37%. And doctors are more praised by the market and tends to earn a much higher compensation than nurses. So, the type of higher education course also influences the earnings and those more praised by the market in terms of earnings are predominantly attended by white persons,” says João Hallak.

The 2019 National Survey of Health (PNS) unveiled that 18.3% of the persons aged 18 years or over suffered either physical, psychological or sexual violence in the 12 months before the interview. In the same year, 20.6% of black persons suffered any of these forms of violence, against 19.3% of brown persons and 16.6% of white persons. Violence hit more women (19.4%), especially the black ones (21.3%). 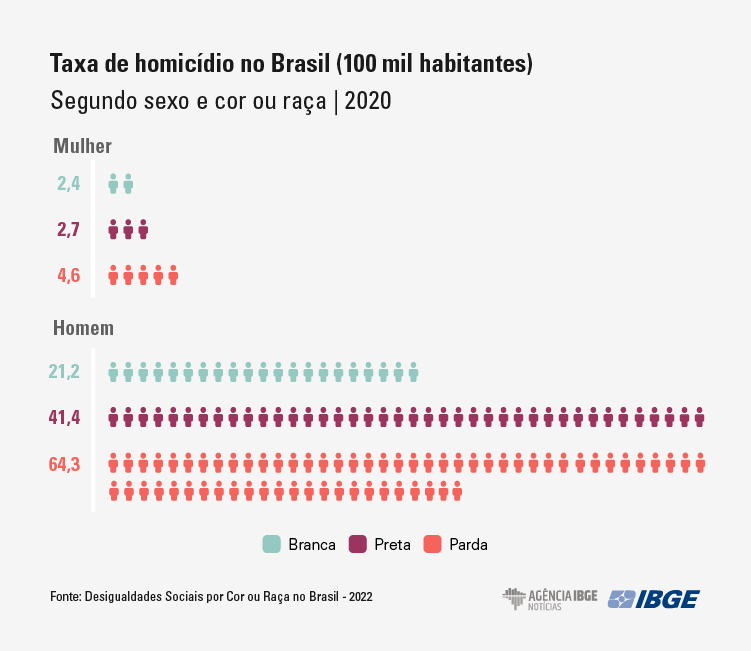 White persons are the majority among city councilors and mayors