Internet was available in 90.0% of Brazilian housing units in 2021

“Between 2019 and 2021, access by means PCs and tablets decreased, whereas access from TV sets increased more than 10 percentage points. An analysis of the series since 2016 shows there was slight increase of access by cell phone, decrease of access by computer from 57.2 to 42.2% and in the use of tablet from 17.8% to 9.9%. Television sets went from 11.7% in 2016 to 44.4%. Earnings in these housing units were higher among those using tablets, R$ 3 thousand; against R$ 2,296 earned by those using PCs, R$ 1,985 by those accessing the Internet via TV. Persons who use cell phones to access the Internet have the lowest earnings, R$ 1.480,” Flávia Vinhaes, analyst of the survey.

The data released today (16) by the IBGE can be found in the Information and Communication Technology (TIC), which is investigated during visits in the 4th quarter for the Continuous National Household Sample Survey (PNAD), which encompasses Internet access and to television in housing units and Internet access and ownership of mobile telephone by persons 10 years of age and over. The latest comparisons are those between 2019 and 2021, because this module of the survey did not go into the field in 2020 because of the Covid-19 pandemic. 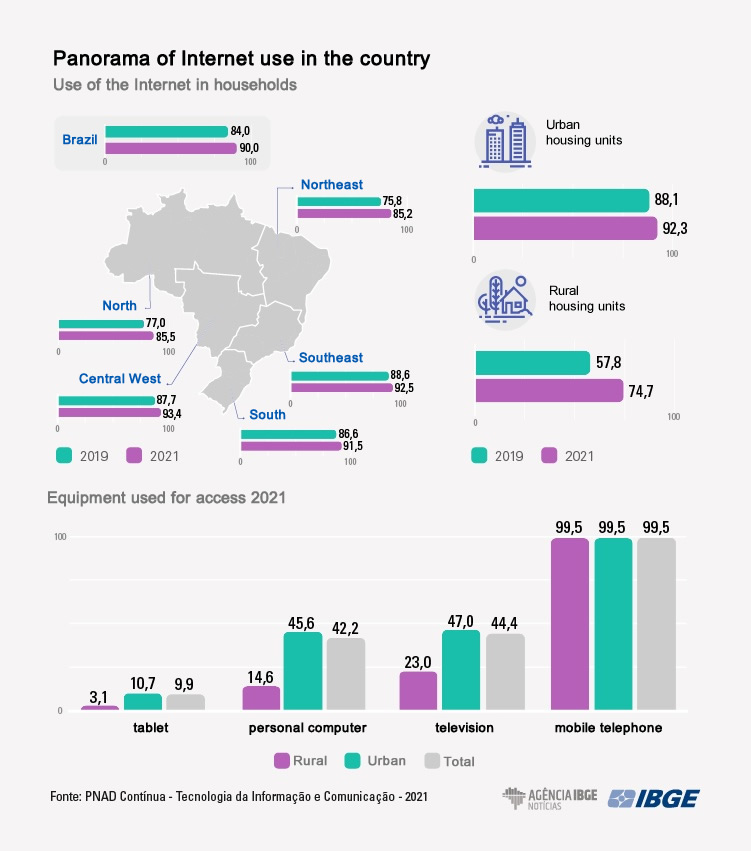 “For the first time in the time series, fixed broadband surpassed mobile broadband, which recorded a decrease, whereas the former had a more significant increase. The increase in the use of broadband may be related to the pandemic, a period when people had to adopt social distancing measures and mostly stay at home, causing mobile broadband to be less used. Another reason can be the expansion of access in the North Region, where the percentage of housing units with Internet access by fixed broadband had a significant increment, with an increase from 54.7%, in 2019, to 70.5% in 2021” Ms. Vinhaes explains.

From 2019 to 2021, the number of households in Brazil with a TV set increased from 68.4 million to 69.6 million. Nevertheless, there was slight decrease in the proportion of households with a TV set: from 96.2% to 95.5% of the total households in the country. This behavior was observed in all the Major Regions, with the biggest reduction of percentage points taking place in the Northeast: from 94.6% to 93.4%.

In housing units without access to subscription television services, 43.5% considered it expensive and 45.6% were not interested in the service. Those who did not have the subscription TV because videos available on the Internet (including shows, films ou series) replaced that service well enough were 8.7%, whereas those that did not have the service due to lack of availability near the housing unit, were only 1.2%.

Almost 60% of the elderly persons use the Internet

Also for the first time since the start of the time series, more persons have used the Internet for voice or video calls (95.7%) than to send or receive text messages, voice messages of images via different e-mail appliactions (94.9%), which had been the most commun use up to 2019. The list also includes watching videos - shows, series and films (89.1%) and sending or receiving e-mail (62%).

In 2021, 28.7 million persons did not have a mobile telefone for personal use, which means 15.6% of the population aged 10 and over. A total of 28.1% reported that the telephone appliance was expensive.

The proportion of housing units in the country with fixed telephony was 15.6%, with a decrease of 7.5 percentage points in relation to 2019 (23.1%). This downward trend was also oberved in all the country’s Major Regions. The rate of housing units that have a mobile telephone (96.3%) increased against 2019 (94.4%).

Proportion of housing units with a PC records decrease