This week the IBGE finishes the Urban Survey of the Surroundings of Households, started on June 20. As of last Friday (9), 88.51% of the data had been collected, on average, and 13 states had already reached more than 90% of the surveying. The survey provides a complete overview of the urban infrastructure of Brazil and marks the beginning of the operations of the 2022 Census.

To enable the operation of the Population Census, the IBGE divided Brazil into enumeration areas - small areas usually with nearly 250 to 350 households. In the Survey of the Surroundings, more than 22 thousand census agents covered 286,113 urban enumeration areas up to Friday and they will cover all the 326,651 enumeration areas of the Brazilian cities.

Maikon Roberth de Novaes, IBGE´s manager of Regionalization and Territorial Classification, highlights that the recognition step and the Survey of the Surroundings are carried out in parallel to assure the coverage of the data collection of the 2022 Census. Novaes reminds that this survey was carried out for the first time in the 2010 Census, before the collection of the household information.

The first goal is to do a last checking to assess the need to update the maps, to check whether a thoroughfare has changed or an alleyway has been created, as well as to check street names. The second goal is to collect information about the characteristics of the public thoroughfares. For the first time ever, information of the surroundings are being collected in every subnormal agglomerate (slums, invaded properties, types of shack, slums in deep valleys and the like), regardless of having a regular arrangement of streets or not. A new methodology is being used to identify the path in labyrinthine areas without GPS signal, very dense areas or of difficult access not recognized by satellite images.

“We will have a more complete overview of the urban infrastructure of the Brazilian cities, including the areas that usually lack such infrastructure. Therefore, the public authorities will have better information to plan public policies that improve the quality of life of the population that lives in these areas,” states Claudio Stenner, IBGE´s director of Geosciences.

The teams are committed to do a good work. Up to tomorrow (12), nearly all the sectors will have been covered, highlights Novaes. The pending issues - due to problems like rainfall, flooded areas and environmental disasters or difficulties - will be finished later, yet still before the beginning of the household data collection of the Census on August 1st.

“There is another group of sectors that is scheduled to be mapped during the household data collection. This group refers to the territories of traditional communities and peoples that will be covered later, as it requires an approach protocol to be used by the enumerators in the indigenous and quilombola areas,” explains Novaes.

“In addition, for each street segment, the census agents answer a questionnaire that raises ten issues of the urban infrastructure, being three new ones. At the moment the agents cover the enumeration area, they are also checking the capacity of the thoroughfare, whether it is paved or not, existence of manholes, existence of street lighting, existence of bus/van stops (new), signaling for bicycles (new), existence of sidewalk, presence of obstacles in the sidewalk (new), existence of wheelchair ramps and existence of forestation. These issues provide an urban overview of the enumeration area. As the survey is applied in every Brazilian municipality, it will bring a portray of the Brazilian infrastructure,” highlights the manager.

Novaes states that the major challenge is the diversity of situations existing in Brazil, which requires a fine tuning of the data collection. The Integrated System of Management and Control (SIGC) monitors the data collection in real time, including the visualization of routes covered by census agents. In 22 days since the beginning of the survey, challenges in infrastructure, connectivity and logistics of distribution of work material for 22 thousand census agents in a continental country with great diversity were overcome. 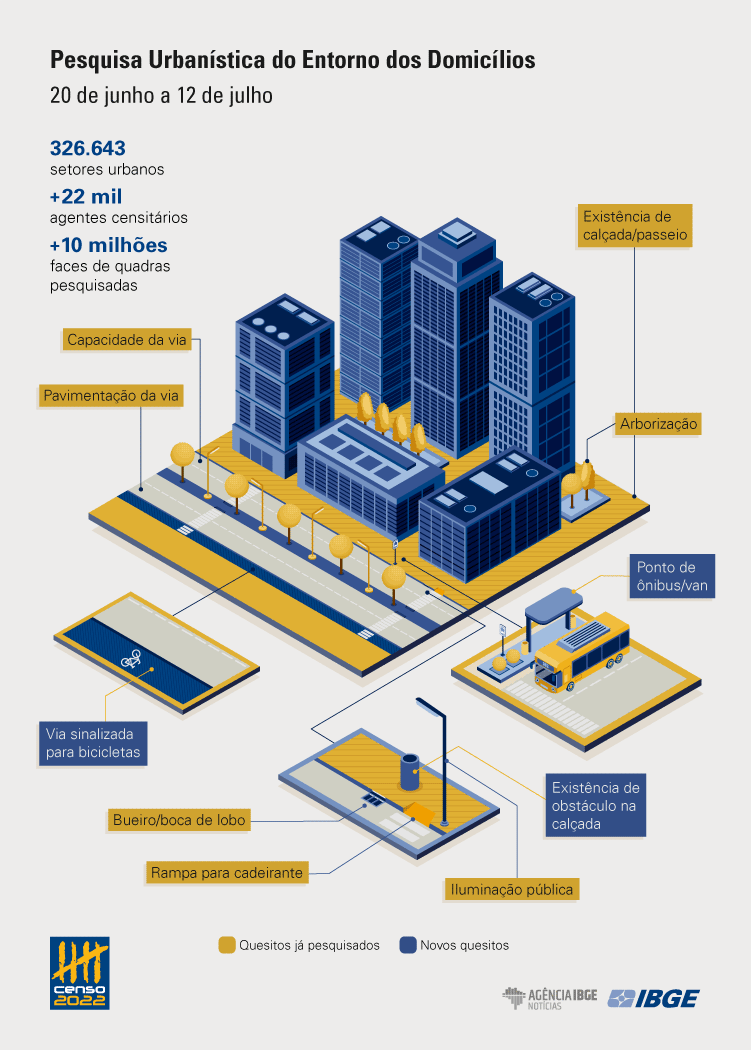