Seventy days before the beginning of the 2022 Census, all the 6,044 data collection stations are already defined in the entire Brazilian territory. These venues are considered the base cell of the census operation, housing the enumerators and their supervisors, who carry out activities like support, management and control of the data collection. They can be located in classrooms of schools and universities, auditoriums, venues granted by city administrations and, according to a technical cooperation agreement, also in branches of the National Institute of Social Security (INSS). He data collection of the 2022 Census begins on August 1st.

“There are large and small data collection stations. It was important to centralize this work, allowing sub-area and area coordinators to follow up the work closely. This venue serves as the base for enumerators, but their field work is in the streets, where they collect the data,” states José Renato Braga, head of the State Unit of Rio Grande do Sul, who was admitted in the IBGE in 1969 and followed eight census operations, either population censuses or agricultural censuses.

He highlights that, at the same time that these venues are being arranged, the IBGE state units are training the professionals who will work in the Census. “Many times people do not understand the dimension of an operation like this. Most of them think that the Census begins on August 1st. This date marks the most complex part of the operation, yet we began a long time ago, by carrying out such preparation,” said him. In Rio Grande do Sul, 366 data collection stations were installed and it is expected that more than a thousand professionals arrive in the coming days, among Municipal Census Agents (ACMs) and Supervisor Census Agents (ACSs) approved in the selection whose result was released on May 20. 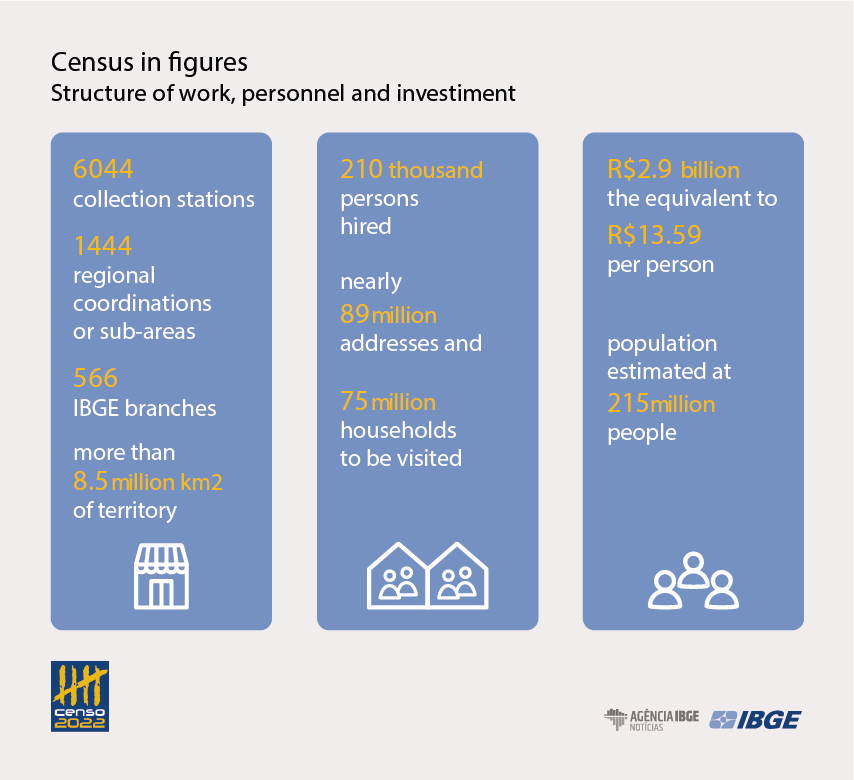 In 70 days, 183 thousand enumerators will cover more than 8.5 million square kilometers of the Brazilian territory, knocking door to door to portray the population that lives in Brazil. Carrying out his first census as the head of the State Unit of Bahia, André Urpia says that there is still a lot to be done in such a huge operation. “No matter how much you plan, there are many activities. Yet, everybody is very motivated. The Census brings a thrill, causing the servants to work even more,” said him.

“They are 600 people working at the IBGE in Bahia, soon they will be 2 thousand and then, 12 thousand, so it is a superb work to make the Census happen, go from street to street, from door to door. At the same time, it opens doors to the IBGE. It is a very important moment for the institution. It is a huge challenge, because we have also to captivate people,” complements him. He tells that he hears many testimonies of people who have already worked in the Census. “People who saw this work as a life experience and volunteers once again,” reports him.

Bahia, the fourth most populous state in Brazil, will have 486 data collection stations. “We are assembling the structure and distributing the equipment to the IBGE branches. At the same time, we are installing the infrastructure, hiring people and preparing the courses, everything required to do the work,” says Urpia. The training of those already summoned to work as Sub-area Census Coordinators (CCSs) has already finished. The preparation of ACMs and ACSs is scheduled to the beginning of June.

In the case of enumerators, whose selection is in the final phase, the five-day training will be in July. “After that training, the professionals will go directly to their workplaces. In the case of ACMs and ACSs, they will be involved in the Survey of Surroundings, scheduled to begin on June 20. After that, the enumerators are prepared. Most of them do not know how is the field work. Knocking door to door is very specific from the IBGE. That is why the training is so important,” says the head of the State Unit of Rio Grande do Sul. In Rio Grande do Sul, the enumerators will visit four million households.

One of the new features introduced by the Census is the monitoring of the work of enumerators through the supervisors´ tablets. “That technology improved a lot the control of the field work to amend a possible error during the data collection in real time. During the training, the enumerators learn that they should be cautious with the tool and that this work is being monitored,” says Urpia, highlighting the importance of other IBGE surveys for the technological advance.

With a smaller number of inhabitants, Serra da Saudade has only four enumeration areas

Using blue vests, caps and badges and with the Mobile Data Collection Devices (DMCs) at hand, the enumerators will cover every address of their enumerator areas - a continuous territorial unit located in a single urban or rural, with a size and number of households that allow them to be surveyed by those professionals. “Whenever the enumerators close a sector, another one is offered to him,” explains the operational coordinator of the Censuses.

1,444 sub-areas were also planned for the 2022 Census. Those areas coordinate the data collection stations and are regions that comprise small municipalities or parts of a large municipality. Each sub-area has a coordinator, who is responsible, among other activities, to follow up the work of the state and national coordinations and implement the guidelines.

One of the major challenges of an enumerator is to be received by residents. Whenever they arrive at and address and are not able to do the interview, those professionals try at least four times to contact the residents in alternative days and hours. For example, it includes nights and weekends. The visits are registered in the DMC. Whenever the contact is very hard, it can be necessary to visit the same household from eight to ten times to find the residents and then apply the questionnaire.

Velocity becomes important in this step against the fear of residents to lose time to answer the questionnaire. On top of other concerns of respondents, like safety. Therefore, the head of the state unit of Rio Grande do Sul says that the 2022 Census tends to be more challenging than the previous ones. “The reception of residents changed a lot. Other censuses could have technical difficulties, but the access was easier. Today, if you arrive at a household and is not received, it is hard to convince the resident of the importance of the work,” says Braga.

The operation coordinator of the Censuses says that this is challenged especially linked to major urban centers. To bypass the situation, the IBGE teams are taking actions. “The IBGE carries out Census Planning and Monitoring Meetings with key persons in the municipalities to ask their support in the dissemination of the operation, as well as establishes partnerships with condominium administrators in larger cities,” reports Claudio Barbosa.

The head of the State Unit of Bahia reports that, during the Census tests, the team perceived changes in the way professionals were received. “The structures of the families are even smaller, so it is difficult to find residents at home. And there is the issue of safety, of fearing to receive an unknown person. In addition, the rhythm of life changed. They are much more connected and have no time available,” says Urpia.

“In the condominiums, it is difficult to approach these residents, warn them that every information is confidential and that we need that everyone answers,” adds him. Residents can check the id of enumerators through the QR Code in their badges. It is also possible to check the data by typing the professional´s registration on the respondendo.ibge.gov.br  website.

Other possible options is to answer it through the Internet or telephone, which will be mixed with the face-to-face interviews. If a resident prefers to answer through the Internet, they should wait for the visit of the enumerator, who will record the email and cell phone number in the system. He will receive a token (eTicket), which will be used to fill the Census form. He will have seven days to complete the operation.