GDP, which is the total goods and services produced in the country is 0.5% above that in Q$ 2019, pre-pandemic period, but it is still 2.8% below the highest level in the time series observed in the first quarter of 2014.

Data come from the System of National Accounts, released today (4) by the IBGE. 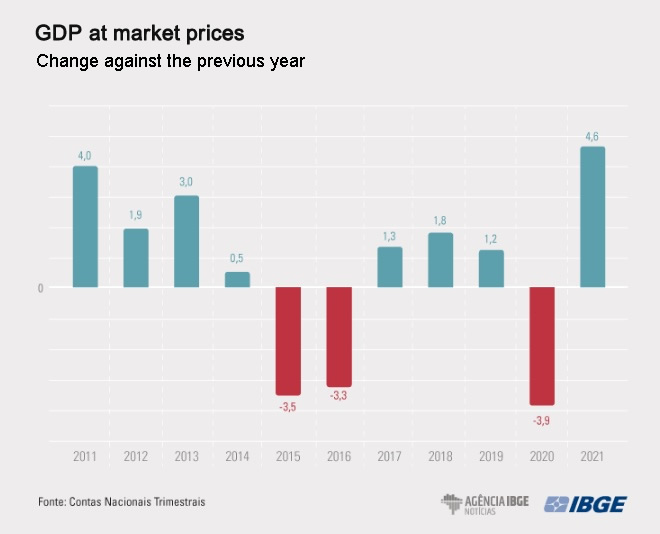 “All the activities that form services increased in 2021, with a highlight to transportation, storage and mailing (11.4%). Transportation of passengers rose significantly, mainly in the end of the year, as persons started to travel after a period away from this activity. The activity of Information and communication (12,3%) also rose, driven by Intenet and development of systems. This activity had recorded increase before the pandemic, but with social distancing and all the changes resulting from the pandemic, this process was more intense, and caused the activity to increase even more,” says the coordinator of National Accounts of the IBGE, Rebeca Palis.

Other service activities (7.6%) also recorded increase in the period. “These are activities related to face-to-face services, part of the economy that was mostly affected by the pandemic, but which recovered, pushed by the very demand of households for this type of service,” Ms. Palis adds. Trade (5.5%), real estate activities (2.2%), administration, defense, public health and education and social security (1.5%) and Financial, insurance and related services activities (0.7%).

In industry, a highlight was the performance of Construction, which, after a decrease of 6.3% in 2020, increased to 9.7% in 2021. This expansion was evidenced by the growth of employment in the activity.

The only activity that did not record incease was electricity and gas, water, sewage and waste management which recorded a negative change of 0.1%, which indicated stability. “The water crisis had a negative effect on the performance of the activity in 2021,” says Rebeca Palis./p>

Droughts and frosts affected the result of agriculture

Agriculture, which had grown in 2020, fell by 0.2% in 2021, as a result of the long drought and of frosts. “In spite of the annual increase of soybean production (11.0%), important crops recorded decrease in the output estimate and loss of productivity in 2021, such as sugarcane 10.1%),corn (-15.0%) and coffee (-21.1%). The low performance of livestock was mainly due to the decrease in output estimates of cattle and of milk.” 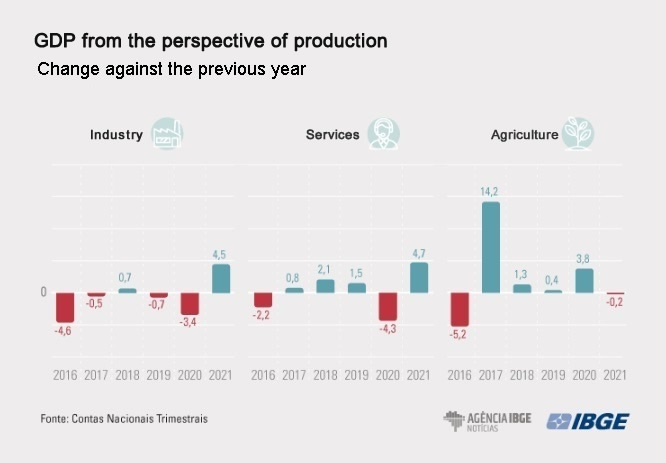 All the components of domestic demand recorded increase in 2021

Opposite to what happened in 2020, all the components of demand advanced in 2021, and contributed positively to GDP growth. Household consumption advanced 3.6% and government consumption, 2.0%. In the previous year, these components had decreased by 5.4% and 4.5%, respectively.

““Employment recovered in 2021, but the high inflation affected the consumption capacity of households. Interests also began to rise. We also have government social security programs. That is, positive and negative effects would have an impact on household consumption last yeat,” Ms. Palis said.

Investments (Gross Fixed Capital Formation) grew by 17.2%, influenced by construction, which, in the previous year, recorded a decrease and by the domestic production of capital goods. The investment rate increased from 16.6% to 19.2% in one year.

The balance of goods and services recorded an increase of 12.4% in imports and of 5.8% in exports. In 2020, the decreases were of 9.8% and 1.8%, respectively. “With economy heating, the country imported more than it exported, and that led to a deficit in the balance of goods and services. That pushed GDP a little lower, and contributed negatively to the performance of the economy,” says Rebeca Palis.

Among the exportable products, extraction of petroleum and natural gas; basic metals; motor vehicles; and metal products stand out. In the case of services, trips recorded a bigger increase. Among imports, the highlights were chemicals, electric machinery and appliances; car industry and metal products. 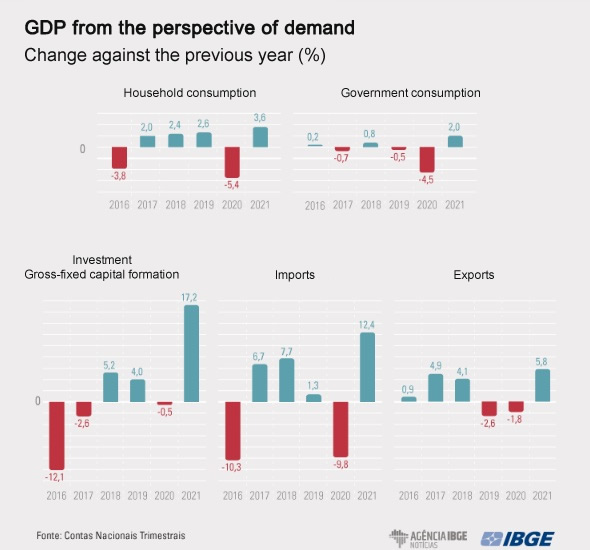 “Agriculture increased by 5.8%, but the determining element for the increase of GDP in the fourth quarter was services (0.5%), the most relevant in the economy. As for services, the highlights were the same activities that recorded increases in the year: information and communication (3.4%), transportation, storage and mailing (2.6%), other services activities (2.1%),” Rebeca Palis highlights.

Administration, defense, public health and education, and social security also recorded increase (1.0%). On the other hand, trade recorded a decrease (-2.0%), followed by the negative change in Real estate activities (-0.4%) and stability in Financial, insurance and related services activities (0,0%).

Industry retreated with the most significant decrease in manufacturing industry (-2.5%), mainly in the activity of durable consumer goods. Mining and quarrying industries (-2.4%) and the activity of Electricity and gas, water, sewage and waste management (-0.2%) also recorded decreases. The only positive result was that of Construction (1.5%).

Agriculture increased because it was the end of coffee and corn harvest, the estimates of which were negative. That ended up driving the quarter-on-quarter result upwards.

From the perspective of expenditure, there was an increase in Household Consumption (0.7%) and Government Consumption (0.8%). Investments (Gross Fixed Capital Formation) increased by 0.4% in the period. As for the external sector, exports fell by 2.4%, whereas imports increased by 0.5% from Q3 2021.

The System of National Accounts shows the current values and the volume indexes, on a quarterly basis, for the Gross Domestic Product (GDP) at market prices, taxes on products, value added at basic prices, personal consumption, government consumption, gross fixed capital formation, stock change, exports and imports of goods and services. The survey began in 1988 at the IBGE and it was restructured in 1998, when its results were integrated to the System of National Accounts, of annual periodicity.