After the test in Paquetá Island, in Rio de Janeiro, the IBGE begins this Thursday (4) tests for the 2022 Population Census in localities in the 27 Federation Units. Equipment, data collection systems, questionnaires and the approach to the informant in local contexts will be assessed. This huge countrywide test aims at mobilizing the society to answer the Census, which will visit more than 70 million Brazilian households, in the entire country, in June next year.

The data will be collected in the tests by nearly 250 enumerators both in neighborhoods in the capitals – like in Belo Horizonte (MG), Campo Grande (MS) and Rio Branco (AC) – and in localities far from major urban centers – like the riverside community of Novo Remanso, far 200 km from Manaus (AM), or the municipality of Tigrinhos, a nine-hour drive from Florianópolis (SC). The tourism destination of Amaralina, in Salvador (BA), is also on the list.

The tests comprise all the steps of the Census, including the training of enumerators, installation of data collection stations, survey of the surroundings, mixed data-collection model, mobilization of residents and communication.

The enumeration in most localities will last up to the end of November. The survey of the surroundings, which precedes the Census itself and collects information about the urban infrastructure like street lighting, address identification, street paving, existence of sidewalk, bus stops, bicycle paths, urban accessibility and afforestation, was carried out days before the data collection It was followed by the supervision phase and then by the Post-Enumeration Survey, which assesses the coverage and quality of the data collection of the census study.

To guarantee the security of enumerators and residents during the tests, the IBGE teams will follow health protocols against Covid-19, like the use of masks, cleaning hands and equipment with alcohol gel and social distancing.

The president of the IBGE, Eduardo Rio Neto, will participate in the beginning of the tests in the municipality of Jardim Olinda (PR) and in the neighborhoods of Minas Brasil, in Belo Horizonte (MG), and Amaralina, in Salvador (BA).

“After the success of the test in Paquetá, which was only possible due to the advance in the vaccination, we will begin another step in the Census with tests in 27 localities, one in each Brazilian state. These localities were strategically selected aiming at improving the data collection processes, taking into account the different regional characteristics which are a mark of our country,” said Rios Neto.

In São Paulo, the test will be carried out in the neighborhood of Prosperidade, in São Caetano do Sul, and it will count with the presence of the IBGE´s director of Surveys, Cimar Azeredo.

“Besides testing, our major goal is to show the population the benefits of the Census. As well as providing mobilization and visibility to the operation. The idea is that November 4 be a kind of “National Census Day”. It will be our first incursion in the national territory with a census operation since the beginning of the pandemic. We need to work together and coordinated, the IBGE, its servants, the country and the Brazilians,” stated Cimar Azeredo.

Test of the 2022 Census in the States

Besides Paquetá Island in the state of Rio de Janeiro, where the first test was carried out in September, the IBGE will visit the households in the municipality of Engenheiro Paulo de Frontin, where the Survey of the Surroundings, a previous step of the enumeration, had already been carried out in March. However, the data collection was postponed due to the advance in the cases of Covid-19 then. Now in November, the questionnaires will be applied in all the enumeration areas of the city.

To test specific characteristics of a census operation which are not found in Paulo de Frontin, data will be also collected in subnormal agglomerates (slums) and in improvised housing units (such as buildings under construction and shacks) in Nova Iguaçu.

Indigenous lands and quilombola territories in Angra dos Reis and Paraty, in the south of Rio de Janeiro, will also be enumerated from November 24 onwards to test specific health protocols, behavior and approach norms, data collection procedures and questions that will be only made to this population.

“For example, we can only enter an indigenous land with a negative PCR test. We will step up the care with the use of masks, alcohol gel and social distancing and avoid to enter houses,” explains Marta Antunes, the technician in charge of the Census project for Traditional Peoples and Communities. “We will test the approach, check the need for community mentors and, besides the household questionnaire, we will also apply a specific questionnaire with questions about the community reality.”

The basic questionnaire (26 questions) and the sample one (77 questions) will be applied in all localities to check the questions. Among them, that that deals with the presence of persons with autism in the household, a subject included in the Census questionnaire by Law 13,861/2019.

Besides the questionnaires and the approach to the informants, the tests will assess the entire technological infrastructure prepared for the operation, like the Mobile Data Collection Devices (DMCs), similar to blue smartphones, and the systems of capture, transmission and monitoring of the information collected.

Unlike the 2010 Census, the current DMCs have chips to access the Internet, allowing the transmission of the information to the IBGE database in the end of the data collection.  They can also call and answer calls from residents to carry out the interviews. The enumerators can also use the equipment to text their supervisors, which helps to clarify doubts. The next Census will use the technology of cloud storage to quickly download inputs to the DMCs, like maps and coordinates.

The IBGE´s data centers, located in Rio de Janeiro and São Paulo, have a much more up-to-date and robust structure to receive a huge amount of information and process faster data, streamlining the dealing and release of information to the society.

IBGEeduca mobilizes schools for the Census

To carry out the national test, the IBGE´s State Units are mobilizing the local communities. Information material of IBGEeduca, like displays and folders, is being distributed to students and educators in schools, similar to those that will be delivered to schools next year. Informing students about the importance of the census operation for Brazil and about the accomplishment of tests is a way to raise awareness in the community to welcome the enumerators and answer the survey.

“In addition, schools are a place where parents and guardians circulate. We distribute displays in schools to disseminate the Census to the families. This material brings information about the country, the municipality and the IBGE itself, thus strengthening the image of the institution as the official source of information about Brazil,” explains Renata Corrêa, IBGE´s manager of Educational Matters.

How to check the id of interviewers

IBGE´s enumerators work with a uniform, including a blue cap, vest and bag with the IBGE´s logo. The vest also shows the identification badge, including the photograph, registration and id numbers of the interviewer. They will use a blue DMC, similar to a smartphone, to collect information. The informants can check the identity of all interviewers through the https://respondendo.ibge.gov.br website or phone 0800 721 8181.

As it happens in all the IBGE´s surveys, the information provided by residents to enumerators is confidential.

New selection process for the Census

The IBGE is now hiring a new company to carry out the selection process for the 2022 Census. Last October 18, the selection for enumerators and census agents, which was suspended since April, was canceled by the IBGE. The agreement with Cebraspe, which would carry out the selection, was not renewed and the enrollment rate will be reimbursed to the candidates. New information about the reimbursement of the rate and the beginning of the enrollment in the new selection process will be soon released by the Coordination of Communication in the official channels. 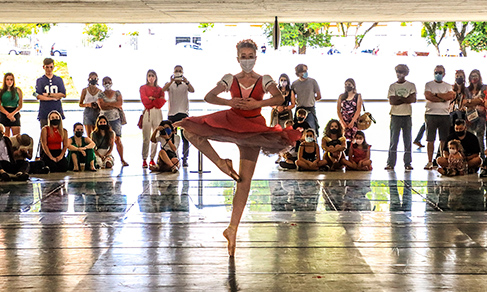