The IBGE completes today (16) the activities of the first field test for the 2022 Census, carried out in Paquetá Island, in Rio de Janeiro. Preliminary data of the operation carried out in September are being unveiled, like the number of households, total population by sex and the age pyramid of the locality. Paquetá was chosen because more than 85% of the population was already immunized with the two doses of the vaccine against Covid-19.

“Paquetá was a very important test-event, part of a set of preparatory actions aiming at carrying out a Census next year able to precisely portray Brazil. We will repeat it in other 27 localities in November, strategically selected in each state, also aiming at improving and producing high-quality results,” states Cimar Azeredo, IBGE´s director of Surveys.

The IBGE will make new tests, in a larger scale, in all the states and in the Federal District from November 4 onwards. In the state of Rio de Janeiro, the municipality of Engenheiro Paulo de Frontin will receive the enumerators. Subnormal agglomerates and improvised housing units will also be visited in Nova Iguaçu (RJ) and in indigenous and quilombola territories in Angra dos Reis (RJ) and Paraty (RJ). 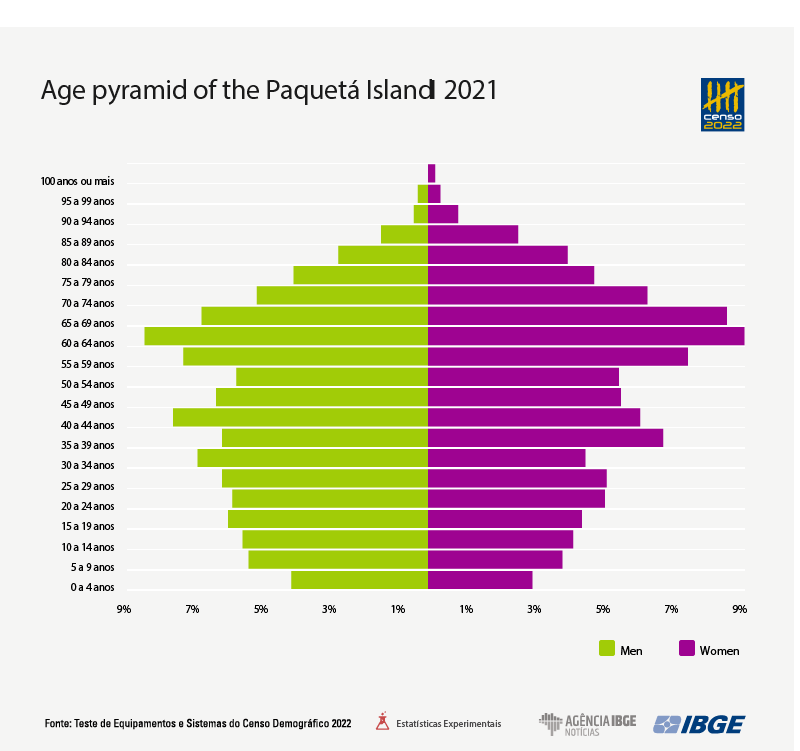 “The test in Paquetá was a success inasmuch as it allowed us to note a number of technical issues, clarifying them and establishing trends. For example, with the high level of vaccination in the island, residents preferred face-to-face interviews. For the Census in 2022, we remain committed to providing the society with the most convenient choice, fostering the way of self filling the questionnaire through the Internet, especially in the households in which the enumerators have difficulties to access the residents,” said Eduardo Rios Neto, president of the IBGE.

“The fact is that Paquetá reinforced our optimism and our conviction that we are ready to accomplish, in November, other tests in all the Brazilian states,” added the president, who will make a live broadcast with the association of residents in the island after presenting the preliminary results.

It was not possible to carry out the interviews with the residents in nearly 2% of the permanent private households of Paquetá, either due to difficulties to find them (0.8%) or to refusals (1.2%).

To show the preliminary results of the test of the 2022 Census to the population of Paquetá, the IBGE designed some maps showing the changes in the population density of the island, as well as some information from the Urban Survey of the Surrounding, like, for example, the conditions of circulation in the streets, existence of manholes and existence of pavement and afforestation. 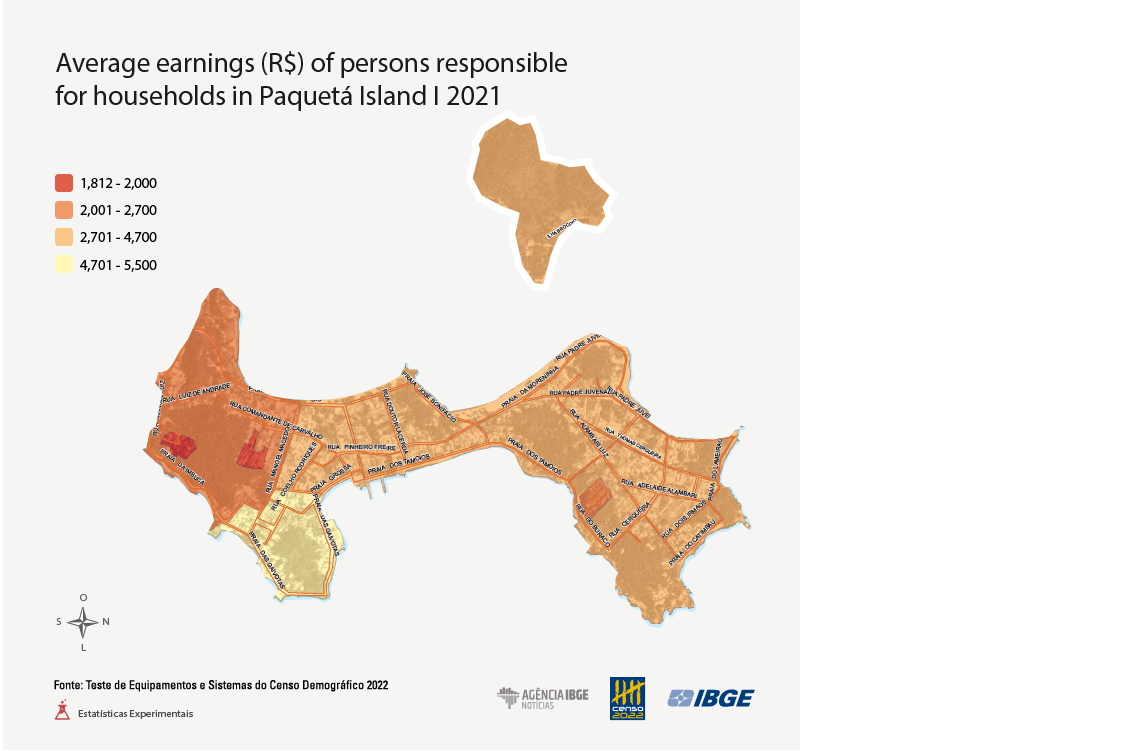 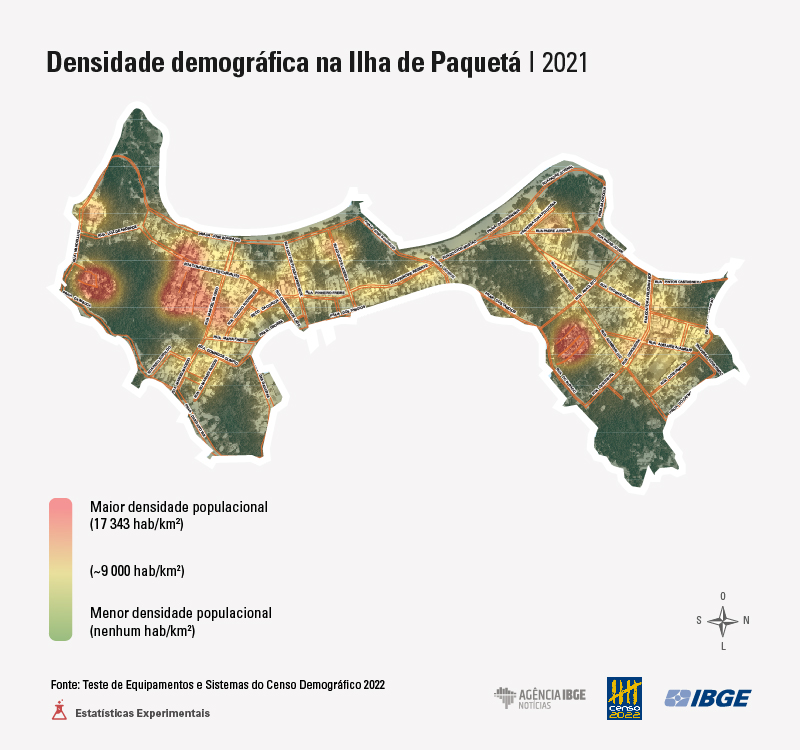 The results present are of preliminary nature, since the data collection and treatment will still be thoroughly adjusted. The IBGE will remain working to complete the entire process required to release the final results as Experimental Statistics, i.e., whose results are assessed to check the need for technical and methodological improvements to be implemented in the final operation.

One hour away from Rio de Janeiro downtown, with slightly more than 1.2 km2 and nearly 40 streets, Paquetá Island - officially a neighborhood of Rio de Janeiro - was chosen for the test as it counts with more than 85% of the adult population immunized with the two doses against Covid-19. This factor provided more security to the work of the IBGE teams and residents. The vicinity with the IBGE headquarters also favored, as it reduced operational resources and costs.

The test began on September 1st, with the Urban Survey of Surrounding. The enumeration was carried out between September 6 and 24, directly involving 16 IBGE´s technicians, 12 of them as enumerators. It was followed by the supervision phase and then by the Post-Enumeration Survey, which assessed the coverage and quality of the data collection of the census study.

The operation in Paquetá tested the systems and equipment that will be used in the Census next year, like the Data Collection Mobile Devices (DMCs), smartphones that keep the electronic questionnaires. The operation served also to assess the test model to be used in the other 26 IBGE state units in November.

Volume of sales of the retail trade in Brazil retreated 1.3% in September compared with the previous month, representing the second consecutive drop...

According to the first estimate of the Systematic Survey of Agricultural Production - LSPA, released today (11) by the IBGE, the Brazilian harvest...