The Gross Domestic Product (GDP) declined 0.1% in the second quarter this year compared with the first quarter. This result points out to a stability and comes after three consecutive positive quarters of growth in the economy. At current values, the GDP, which is the sum of final goods and services produced in Brazil, reached R$2.1 trillion.

With this result, the Brazilian economy advanced 6.4% in the first semester. It accrues a rise of 1.8% in the last four quarters and it grew 12.4% compared with the second quarter last year. The GDP remains at the level between the end of 2019 and beginning of 2020, the pre-pandemic period, and it is still 3.2% below the peak of the economic activity in the time series, reached in the first quarter of 2014.

The data are from the System of Quarterly National Accounts, released today (1) by the IBGE. 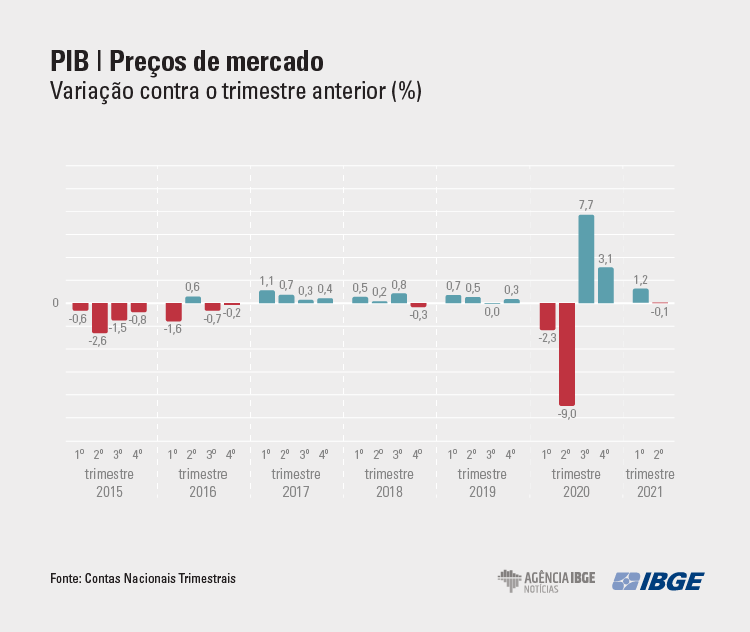 The performance of the economy in the quarter comes from the negative results of agriculture (-2.8%) and industry (-0.2%). On the other hand, services advanced 0.7% in the period. “One thing somehow offset the other. Agriculture stood negative because the harvest of coffee entered in the calculation. It had an important weight in the second quarter. The harvest of coffee is of negative biennial bearings, which results in a significant retraction of the production,” explains Rebeca Palis, IBGE´s coordinator of National Accounts.

The industrial activity also retreated, due to the drops of 2.2% in the manufacturing industry and of 0.9% in the activity of electricity and gas, water, sewage, and waste management activities. Those drops offset the rise of 5.3% in the mining and quarrying industries and of 2.7% in construction.

“The manufacturing industry is influenced by the lack of inputs in the production chains, which is the case of the car industry, which deals with the lack of electronic components. It is an activity that is not meeting the demand. In the activity of electricity, the production cost increased due to the water crisis, which increased the use of thermoelectric plants,” adds Palis.

“Almost all the services components grew, highlighted by trade and transportation in the inter-annual rate, which were the most affected activities by the pandemic and are recovering now,” notes Rebeca Palis. 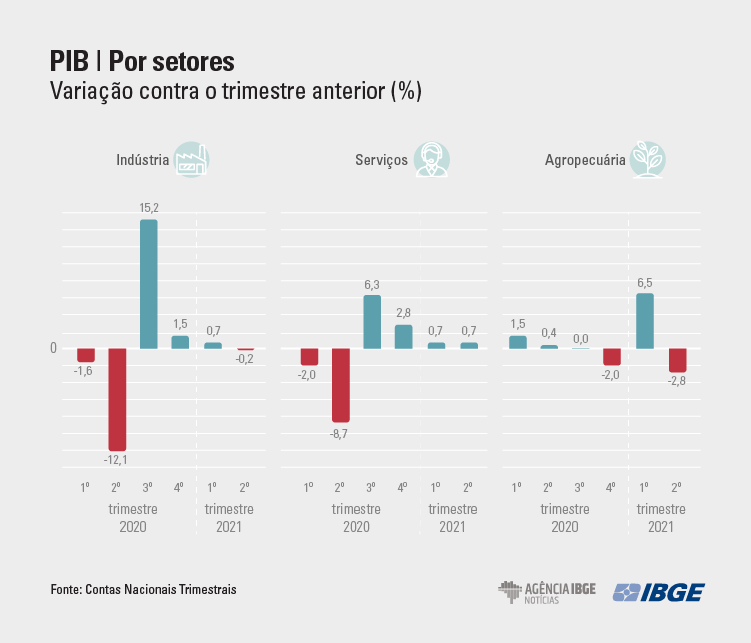 Consumption of households remains stable and that of government, grows

“In spite of the aid programs of the government, of the increase in the credit to physical persons and of the improvement of the labor market, the real wage bill has been dropping, negatively affected by the increase in the inflation. The interests also began to rise. That impacts the consumption of households,” notes Palis.

The Brazilian trade balance rose 9.4% in exports of goods and services, the highest change since the first quarter of 2010. In the exports agenda, the harvest of soybeans stood out, stimulated by favorable prices. On the other hand, imports fell 0.6% compared with the first quarter of the year. 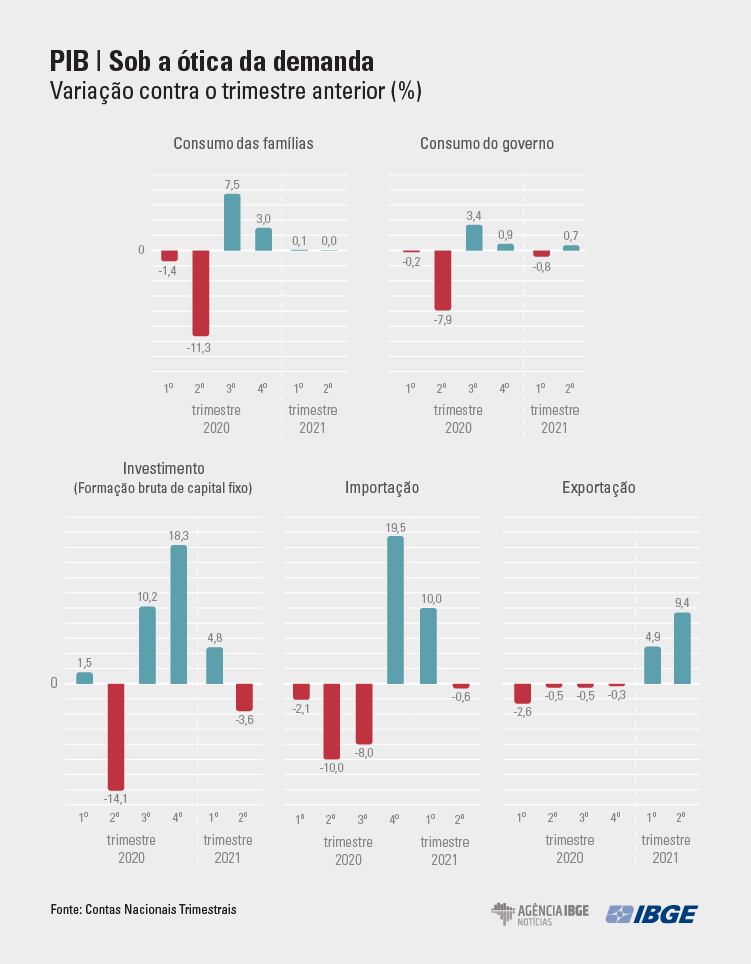 In the cumulative index of the first semester, the GDP grew 6.4% in relation to the same period of 2020, with positive performance in agriculture (3.3%), industry (10.0%) and services (4.7%). “We grew, yet the comparison basis should be noticed. The economy shrank 5.6% in the same semester last year, when the biggest impact of the pandemic happened,” adds Rebeca Palis.

Under the point of view of the expenditures, the consumption of households grew 10.8%. The investments (Gross Fixed Capital Formation) advanced 32.9% in the second quarter. Such increase was justified by the positive figures in the domestic production, imports of capital goods and construction. The consumption of government rose 4.2%.

In the foreign sector, exports increased 14.1%, while imports advanced 20.2%. In exports, the growth is mainly explained by the increase in agricultural products, car industry, machinery and equipment and non-metallic minerals On the other hand, imports grew mainly due to the increase in the acquisition of motor vehicles, machinery and equipment, basic metals and petroleum refining.