In pre-pandemic, nearly 38% of the population had some difficulty of water supply

Almost 38% of the population in the country faced some type of vulnerability in the access to water that could make it difficult to clean their hands and objects in 2019, a period prior to the Covid-19 pandemic. Whereas 22.4% lived in housing units without daily supply or structure for water storage, 11.9% were supplied by other means rather than the general system. Also, 3.4% of the housing units were neither connected to the general system nor had piped water.

Data comes from Housing in the Pre-Covid-19-Pandemic period, released today (23), by the IBGE. The study investigates living conditions of the Brazilian population, with a focus on characteristics of the housing unit: water supply; household density; existence of a bathroom, and household income. Indicators have been generated from Continuous PNAD 2019 and are available at covid19.ibge.gov.br.

“At present, when health authorities call attention to the importance of social distancing and of washing hands with water and soap in order to fight the pandemic, the IBGE considers it essential to make available information that can help people overcome this crisis and that can protect the population from the severe global scenario in public health,” says Bruno Mandelli Perez, analyst of this study.

Difficulties in cleaning were even bigger in some Major Regions in Brazil. In the North, 10.7% of the Brazilian population lived in housing units without internal water piping and were supplied by other means rather than the general system. In the Northeast, that proportion was of 7.9%. Both figures were above the national average (3.4%). Among the Federation Units, Pará recorded the highest figure, 13.8%. 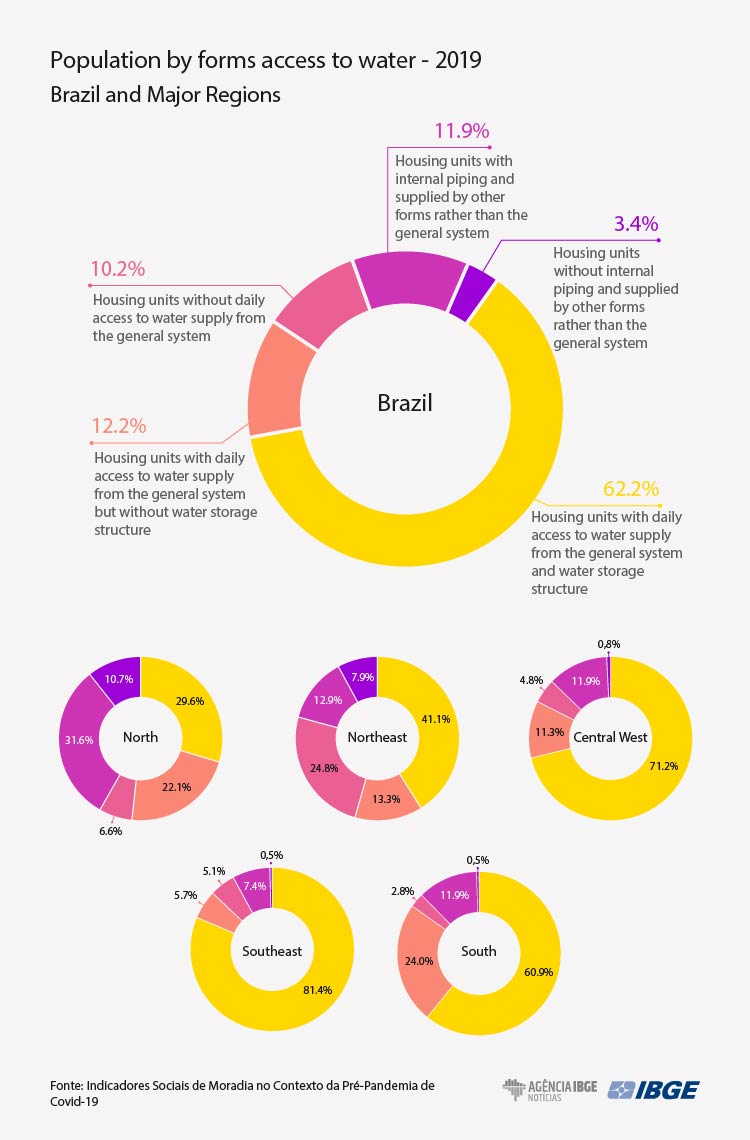 The percentage of black or brown persons (4.8%) who lived in housing units that did not have in the general system their main form of supply or did not have internal piping was significantly bigger than the white population (1.6%).

The analysis also shows that 10.4% of the residents of urban areas in Brazil lived in housing units which, even when mainly supplied by the general system, did not receive water on a daily basis. In the rural areas, 18.8% of the persons lived in housing units that did not have the general system as their main form of supply nor had internal piping.

“These data make inequality in water supply in Brazilian housing units even more evident. Only 62.2% of the population had water from a general system and with a storage structure in the housing unit and, because of that, were in better conditions of following cleaning recommendations,” Mr. Perez explains.

Another concern of health authorities to control the virus dissemination is the number of persons per housing unit (household density) and the possibility of following distancing measures there residence in case one of the residents is infected. In relation to that, data generated by the IBGE show that, in 2019, 27.0% of the population lived in housing units with three people. Other 9.8% of the Brazilian population lived in housing units with six or more residents. 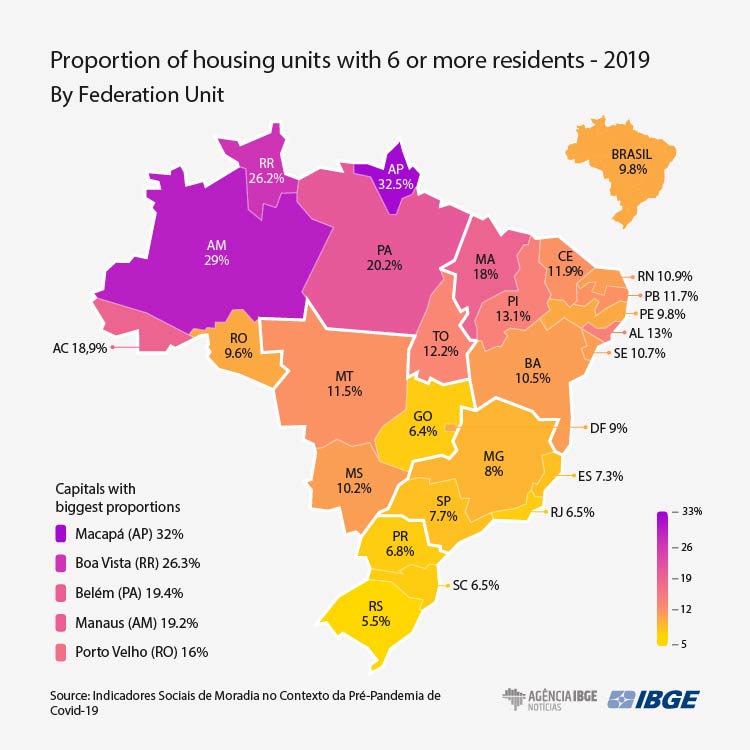 This indicator is also related to the color or race of residents. The proportion of housing units with six or more residents was 12.3% in the black or brown population and 6.5% in the white population. Among those living in poverty, with less than US$5.50 per day or R$436 per capita per month – a threshold adopted by the World Bank to identify poverty conditions in countries such as Brazil –, 22.0% lived in housing units with six or more persons.

19.7% of the population lived in housing units with two residents per room

“That shows how difficult it is for some Brazilians to adopt social distancing measures at home in case a resident has Covid-19-related symptoms.”

8.1% of the population in poverty lived in housing units without a bathroom

Besides difficulties of access to water and the excessive number of residents per room, some Brazilian families lived in housing units without a bathroom. That was observed for 2.6% of the population. In the North of the country, 11.0% of the residents did not have a bathroom at home.

Since April last year, the IBGE has made available data from their own surveys or from those conducted in partnership with Other institutions for the construction of scenarios and the monitoring of public policies aimed at Fighting the pandemic caused by Covid-19 in Brazil. This is another study with the same purpose. Others are available at the hotsite covid19.ibge.gov.br.