Internet reaches 88.1% of students, though 4.1 million in public network did not access it in 2019

The percentage of students aged 10 years and over accessing the Internet increased from 86.6% in 2018 to 88.1% in 2019, though 4.3 million still not used the service, most of them studying in public schools (95.9%). While 4.1 million students from the public education network did not have access to this service, only 174 thousand students in the private sector did not have any connection to the worldwide web.

The data are from the Continuous National Household Sample Survey - Continuous PNAD, which investigated the access to Information and Communication Technologies in the last quarter of 2019. The information was released today (14) by the IBGE.

Nearly all the students of private schools accessed the Internet (98.4%). In the public education, they were 83.7%. This difference is still more significant among the Brazilian Major Regions. In the North and Northeast, the percentage of students of the public network who used the Internet was 68.4% and 77.0%, respectively. In the other regions, this percentage varied from 88.6% to 91.3%.

In the private network, the percentage of Internet use stayed above 95.0% in all the Major Regions, virtually reaching all the students in the South, Southeast and Central-West.

"It is related to the income. 26.1% of the students did not use the Internet because they considered it expensive and 19.3%, due to the cost of the electronic equipment to browse the network. These differences are even bigger among the students of the public and private networks, unveiling a trace of inequality that became even more evident in the pandemic, when the face-to-face classes were suspended and families had to adapt themselves to remote classes," states Alessandra Scalioni Brito, a survey´s analyst. 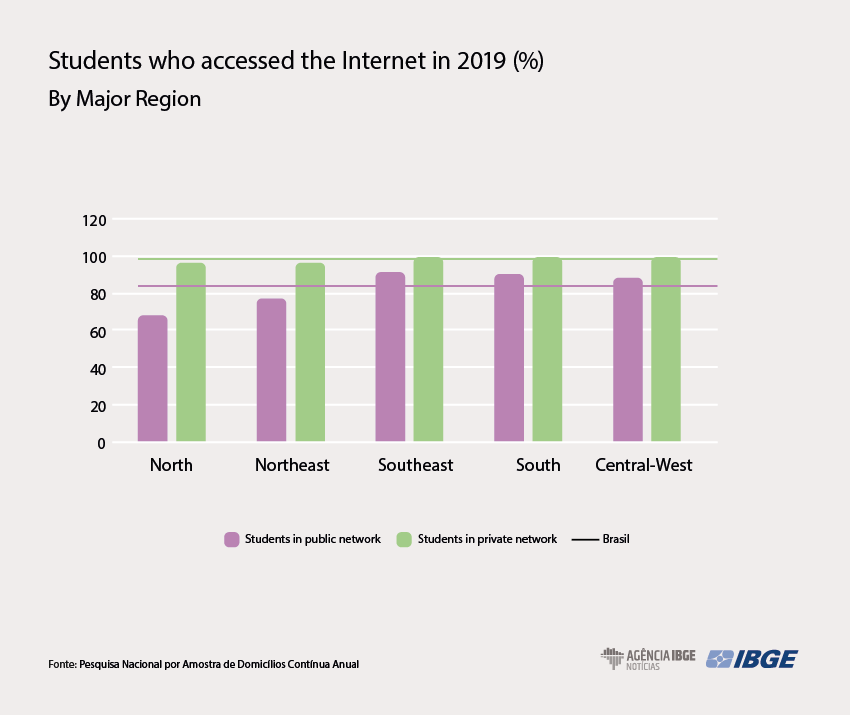 Only 64.8% of students in public schools have cell phones

Of the students from the public network who did not own cell phones in 2019, 41.2% alleged high cost of the device. Other 28.7% reported that they did not own cell phones because they used someone else´s device. These two reasons were also the most common among the students from the private network. However, the use of someone else´s device has a higher weight (40.3%) than the fact of the cell phone being expensive (20.0%).

"These data show that students from the public network had less access to their own phones and that the budget issue had a higher weight. As cell phones are the major means to access the Internet in the context of remote education, these students will probably have more difficulties than those in the private network," says the survey´s analyst.

If the use of cell phones by students to access the Internet has been growing year after year, that of microcomputers has been reducing. In the beginning of the survey in 2016, 70.6% of the students used computers to browse the Internet, against 56.0% in 2019. On the other hand, the use of TVs to browse the Internet rose from 11.9% to 35.0%. Tablets were used only by 13.4% of the students, most of them in the private network. 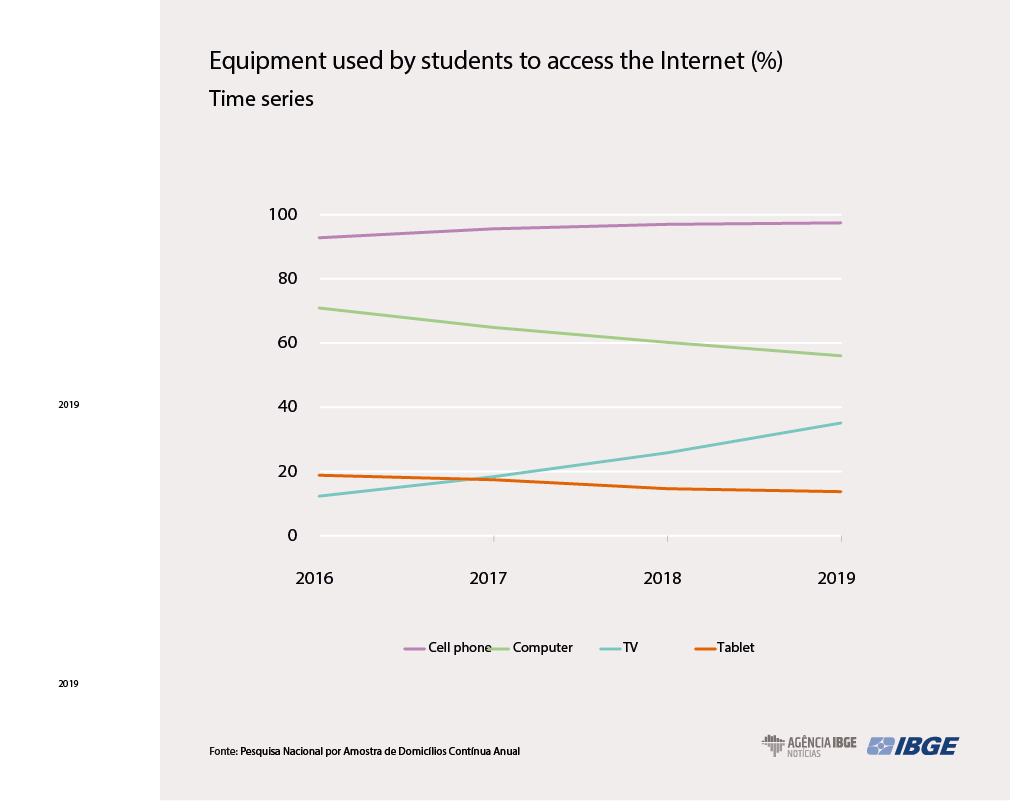 Use of Internet advances in households, mainly in Northeast

PNAD ICT also points out that the Internet was used in 82.7% of the Brazilian households in 2019, an increase of 3.6 percentage points over 2018. The increase was bigger in rural areas (55.6%) than in urban areas (86.7%). All the Major Regions advanced, especially the Northeast. Despite the increase of 5.2 percentage points over 2018, it remained as the region with the lowest percentage of households with access to the Internet (74.3%).

North and Northeast have lowest percentages of persons accessing the Internet

The use of the Internet also advanced in all the age groups, though it is more accelerated in the higher age brackets, like those between 50 and 59 years and 60 years and over, whose access to the Internet rose 6.3 p.p. between 2018 and 2019.

"This could be caused by the evolution in the facilities to use the Internet and its dissemination in the day-to-day of the society," highlights Alessandra Scalioni Brito, reminding that the use of the Internet has more room to grow in these age groups than in the others, which have high percentages of access.

The percentage of persons who did not access the Internet because the service was not available in the places they used to live remained higher in the North (12.8%) and lower in the Southeast (2.0%), varying from 3.2% and 3.9% in the other Major Regions. This reason was higher in rural areas (10.6%) if compared with urban areas (1.5%).