The IBGE has released today (15) Ecosystem Accounting: Condition of Water Bodies, experimental statistics that present indicators such as water abstraction, chemical and physical state of water, besides the proportion of endangered aquatic species, with analyses by Brazilian biomes, with a description of the environmental dynamics between 2010 and 2017. The study, which counted on support from the National Water and Sanitation Sysyem (ANA), also presents a qualitative and quantitative water balance of microbasins in the biomes, by compiling information from different databases, having 2016 as year of reference.

These statistics are part of the System of Environmental Economic Accounting, which follows recommendations from the United Nations (UN), by promoting integration of information between the economy and the environment. The study and its results are experimental since they are still in the testing and evaluation phase. The publication intends to include society in the process of development of those indicators, from the initial stages.

“In the methodology of the System of National Accounts, some natural resources are directly or indirectly counted as economic environmental access. But there is a great variety of benefits generated by nature and that are not included in the System, because they are not yet inserted in a production process. In literature, these are called ecosystem services. For that reason, in a complementary way, the methodological approach of Ecosystem Accounting, which is part of the latest manual recently released by the United Nations Statistical Division, presents the perspective of identification and mapping of these services, which are essential for the continuation of many human activities and of life itself,” says the IBGE’s environmental issues manager, Maria Luisa Pimenta.

Among the variables of this survey is direct abstraction of water from existing surface and underground freshwater sources for different uses. The indicator has been selected to assess pressure of human action on aquatic ecosystems, and it is adequate to overall understanding, together with other variables in this study, as well as in the evaluation of water provision.

“By means of that variable, we can evaluate some of the consumptive uses of water. Use is considered consumptive when water is consumed by the process it is directed to, that is, it does not return. With the databases now available in Brazil, it is possible to make a distinction between the different volumes abstracted by purpose, for example, for irrigated agriculture and urban supply,” Ms. Pimenta explains.

The order of participations of biomes in water abstraction remained the same, but with small changes in the seven years covered by the study. The Atlantic Rainforest accounted for 42% of water abstraction in 2010 and that figure fell to 39% in 2017, whereas the Cerrado went from 20% to 23%.

Evaluation of the chemical state of water was based on five variables. The analysis of results considered the proportion of monitoring spots set in rivers, streams and creeks (lotic water bodies) and lakes, lagoons and dams (lentic water bodies), in which it is possible to assess if the result displayed fits previously established parameters from the National Environmental Council (Conama) which characterize good quality of water resources in biomes. It is worth mentioning that this evaluation is directly related to the existence of monitoring and availability of data from ANA and from managing bodies of water resources and environment in Federation Units.

“The methodology of an ecosystem state account requires a reference standard for quality evaluation (good or bad, in general terms). For those variables, there are environmental resolutions in Brazil that set that quality threshold. Evaluation consisted of the percentage of points in which a given result is considered good and the remaining is bad”, says the IBGE’s environmental manager.

Dissolved oxygen guarantees the presence of life in rivers and lakes. As the decomposition of organic matter by bacteria reduces the level of oxygen in the water, a decrease of this indicator may be related to the presence of pollution by sewage. In 2017, monitoring spots with good levels of the indicator were in proportions above 70% in all the biomes, except for Pantanal, with a change from 42% in 2010 to 56% in rivers and creeks.

Presence of Escherichia Coli, which is related to fecal contamination of water, caused by domestic sewage and from animal waste, means risk to human health. The proportion of spots with proper levels of E. Coli in the rivers of the Amazon increased from 79% to 87% between 2010 and 2017. In the Cerrado there was a decrease from 72% to 60%, also in lotic bodies. In Pantanal, there was a change from 63% to 100%.

Biochemical Oxygen Demand represents the amount of that element that is necessary for aerobic bacteria to oxidize the organic matter found in water. It is also an important indicator of water polluted by sewage disposal. Between 2010 and 2017, that variable recorded a significant decrease of good monitoring spots (from 99% to 47%) showing deterioration in the quality of lagoons and dams of the Caatinga.

Turbidity refers to water trasnparency in the presence of light. Turbid water can be associated to the presence of solid bodies or pigments. Factors such as erosive processes or the presence of sewage disposal can increase turbidity. It is a generic indicator for quality of water, and it should be analyzed together with the others. This indicator remained at adequate levels in all the biomes.

The presence of Total Phosphorus is an indicator of unbalance in the water body, because high concentrations of this element can lead to the excessive development of aquatic plants and algae that make water not proper for human consumption. There is also an impact in terms of other possible uses, such as recreation, tourism, landscaping, irrigation and hydroelectricity. Since a great part of water for human consumption is treated, there is an increase of treatment costs to make water proper for consumption.

Most microbasins are in excellent quantitative conditions

Quantitative water balance, which shows the relationship between water abstraction and water availability, showed that most of the microbasins were in excellent conditions, except for the biomes Caatinga and Pampa, where most of the analyses reported a critical state (44% and 34%, respectively). That was due to low water availability, a natural characteristic of the former, semiarid area and to considerable demand for water the in the latter; from all the water abstracted for irrigation in Brazil, 30% came from the Pampa in 2017, mostly used for rice crops. 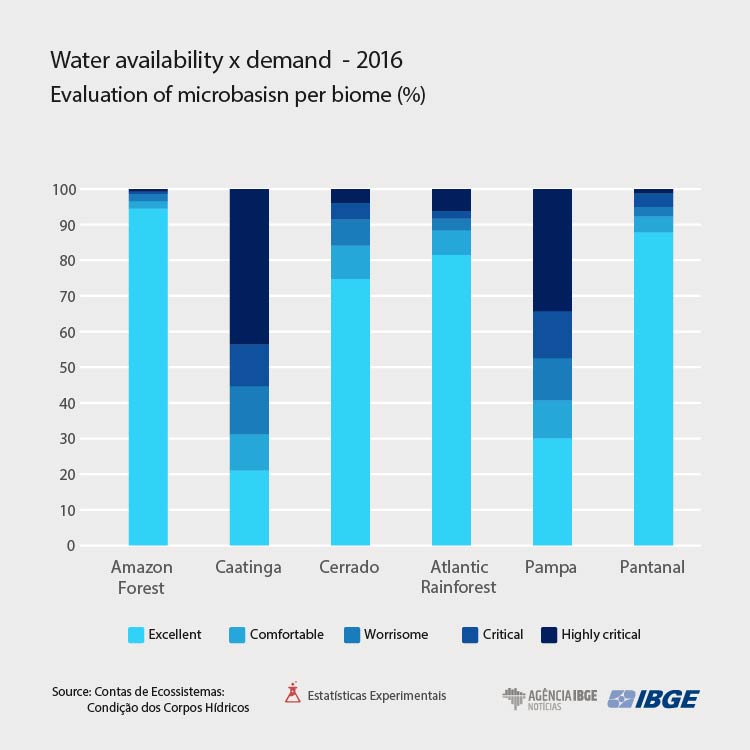 Regarding qualitative water balance, which refers to the capacity of water bodies to dissolve pollutants, most of the microbasins were in excellent conditions in all the biomes. However, 28% of the microbasins in the Atlantic forest had reasonable, bad or very bad water balance conditions, which is related to the bigger presence and concentration of urban areas in this part of the territory, thus worsening quality of water and self-depuration capacity of water bodies.

Among the aquatic species evaluated regarding endangerment in Brazil, it is observed there were more endangered species in fauna, mostly of vertebrates, and of flora in the Atlantic rainforest (360), followed by the Cerrado (216) and the Amazon (104), in absolute figures. A percentage analysis, which is more adequate in terms of methodology, highlights the indicator of endangered vertebrates in the Atlantic rainforest (11.3%), the Cerrado (9.1%) and the Pampa (7.8%).

Currently, the biggest concentration of natural continuous forest areas is in the Amazon, related to the low abstraction of water in the biome, as well as excellent and good quantitative and qualitative water balance, which is related to the lower human occupation in the region and the big offer of water that characterizes regions with wet tropical climate.

The increase of direct water abstraction in the Cerrado, 27% from 2010 to 2017, was observed in the same period as that of the intensification of land use, mainly in terms of increment of agricultural area in the region, shown in the results of the first edition of Ecosystem Accounting released by the IBGE last year. Demand for water is concentrated in the sectors of irrigated agriculture and urban supply. Reduction of the amount of monitoring spots with adequate levels of Total Phosphorous, between 2010 and 2017, can, therefore, be related to erosive processes and diffuse pollution caused by that expansion.

In Pampa, the analysis of land coverage and use showed a predominance of conversion of use between 2000 and 2018 from country vegetation into agricultural and forestry areas. Irrigation of crops concentrates about 90% of the consumption of water in the region and 34% of the basins that compose the biome had highly critical water balance.

The Atlantic rainforest is the only biome in Brazil whose predominant class is not natural coverage, associated with bigger representativeness of water abstraction for human supply (64% of the total in the sector in 2017). Effects of a history of occupation and transformation of the Atlantic rainforest also have an effect on the bigger proportion of endangered vertebrate species in Brazilian biome (11.3% in 2014).