Among the 3.2 million enterprises in operation in the first half of August, 38.6%  still report negative effects of the pandemic on their activities. On the other hand, for 33.9%, there were either no or small effects; and for 27.5%, the effect was positive.

Perceived negative impact is still highest among small-sized enterprises, with up to 49 employees (38.8%), and not as severe according to medium-sized enterprises (from 50 to 499 employees) and large-sized ones (with more than 500 employees), which reported a bigger occurrence of either no or small effects in this fifteen-day period - 44.7% and 46.6%, respectively. Data comes from enterprise Pulse Survey: impact of the Covid19 pandemic on enterprises, released today (15) by the IBGE.

“Every fifteen days we observe increased perception of either no or small effects among larger-sized enterprises”, Flávio Magheli, coordinator of Short-term Surveys at the IBGE, says.

He explains that Enterprise Pulse is a short-term survey of enterprise perception, and that it complements results from other short-term companies intended to provide monthly data on enterprise performance. Pulse Enterprise deals with issues that are not covered by other monthly surveys.

“In this fifth round, relative to the first half of August, we see the continuation of negative effects for 38.6% of the enterprises, with a highlight to small-sized ones, which still feel most negative effects. Among the Major Regions, the Northeast stands out with 52% of positive effects relative to social distancing flexibilization measures. As for sales, perceived decrease hits 36.1% of the enterprises, mainly retail trade,” Mr. Magheli adds.

Enterprises in Construction (47.9%) and Trade (46.3%) reported the biggest occurrences of negative effects in this fifteen-day period. On the other hand, industrial enterprises (38.9%) reported either small or no effects and, in the services sector, 41.9%, with a highlight to information and communication services (61.5%) and professional, administrative and complementary services (45.6%).  In these two sectors, perceived no or small effects added to positive effects negative effects, mainly in industry  (67.1%) and services (68.3%).

“It is not a first fifteen-day period with positive and either no or small effects added that surpass negative effects. But in terms of information and communication services, perception rose from 59% to 80.3%,” Mr. Magheli says.

For 36.1% of the enterprises in operation, there was perceived reduction in sales. By size of enterprises, a highlight is the bigger occurrence of no effects and/or increase of sales among large-sized enterprises, 80.4%, whereas only 16.8% indicated perceived decrease. 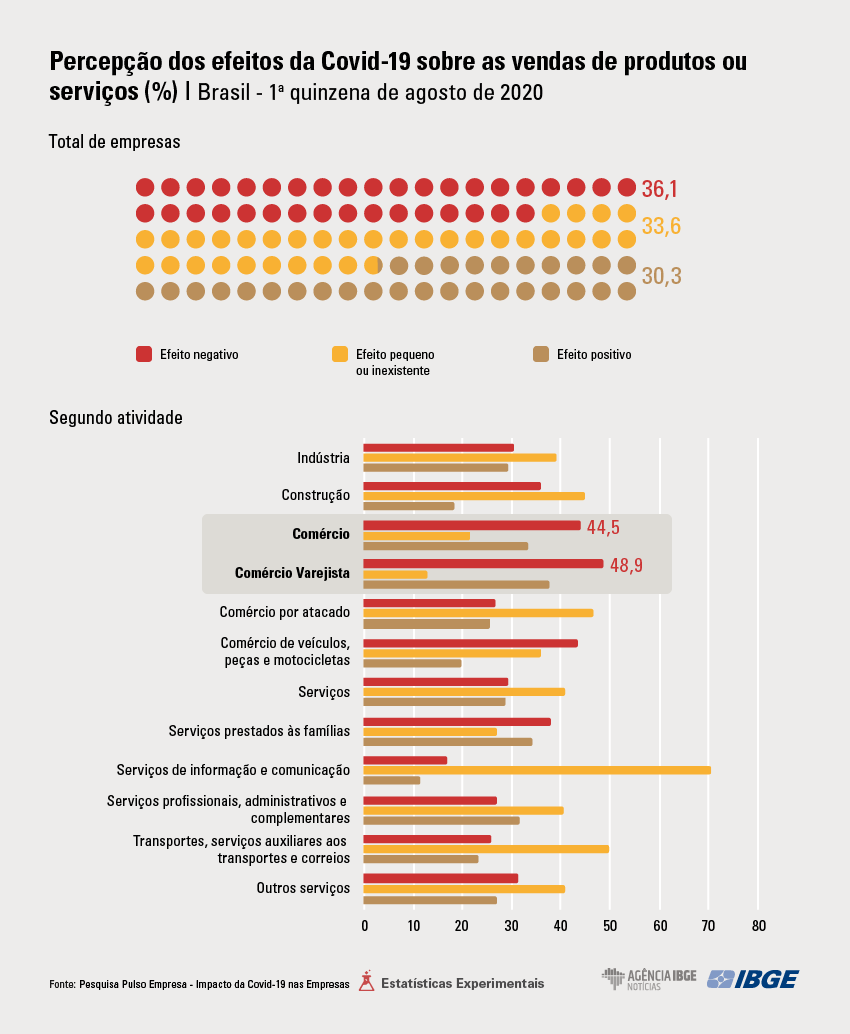 Most of the enterprises (48.8%) reported not having any effects of Covid-19 on the

production of goods or customer service capacity. Considering enterprises reporting positive effects as well (17.4%), the resulting figure is 66.2%. But 33.7% of the total enterprises still report difficulty.

“What calls attention is that in some sectors, such as trade (45.2%), mainly retail trade (49.1%), in spite of the current flexibilization and increased movement of persons, we also see some difficulty in customer service capacity,” Mr.Magheli says.

There was also increase in the perceived difficulty in making regular payments, with an increase from 38.9% in the second half of July to 44.9% in the first half of August. The percentage of enterprises where there were no significant changes remained stable at 49.7%, a percentage that reaches 74.1% among large-sized enterprises and 66.3% among medium-sized enterprises.

“Construction enterprises registered a higher incidence of negative effects, with a change from 23.3% to 52.2% and trade enterprises changed from 42.3% to 51%,” Mr. Magheli adds.

Nine of every 10 enterprises maintained jobs

The conduction of information and prevention measures, and the adoption of extra hygiene measures are still the main initiatives among reaction measures against the pandemic, being adopted by 92.9% of the enterprises.

Postponed payment of taxes was adopted by 32.0%; and the access to an emergency credit line was an action taken by 10.9% of the enterprises.