In 2019, 38.4% of the households registered in Family Health Centers - USFs received at least one visit from either a community health agent or a member of the Family Health team. It is a drop in relation to the percentage of 2013, when 47.2% of the households received this type of monthly visit. The information is from the fist volume of the National Survey of Health - PNS, released today (4) by the IBGE in partnership with the Ministry of Health.

"Although the absolute number of households visited has increased (15.4 million in 2019 against 14.1 million in 2013), the percentage decreased because the number of registered addresses grew in a higher proportion than the monthly visits," explains Maria Lúcia Vieira, coordinator of the survey.

The households in the Central-West (46.8%), Northeast (42.6%) and North (38.7%) recorded higher results than the national average, whereas those in the Southeast posted the worst figures (33.4%). The survey points out to another drawback in relation to the visits: 23.8% of the households registered in the USFs, which corresponds to 9.5 million, never received any visit from those health professionals. This figure represents an increase in relation to the 2013 data (17.7%), the last edition of the survey. Such growth took place in all the Major Regions and the highest percentage was registered in the Southeast, where 30% of the households never received this type of visit. 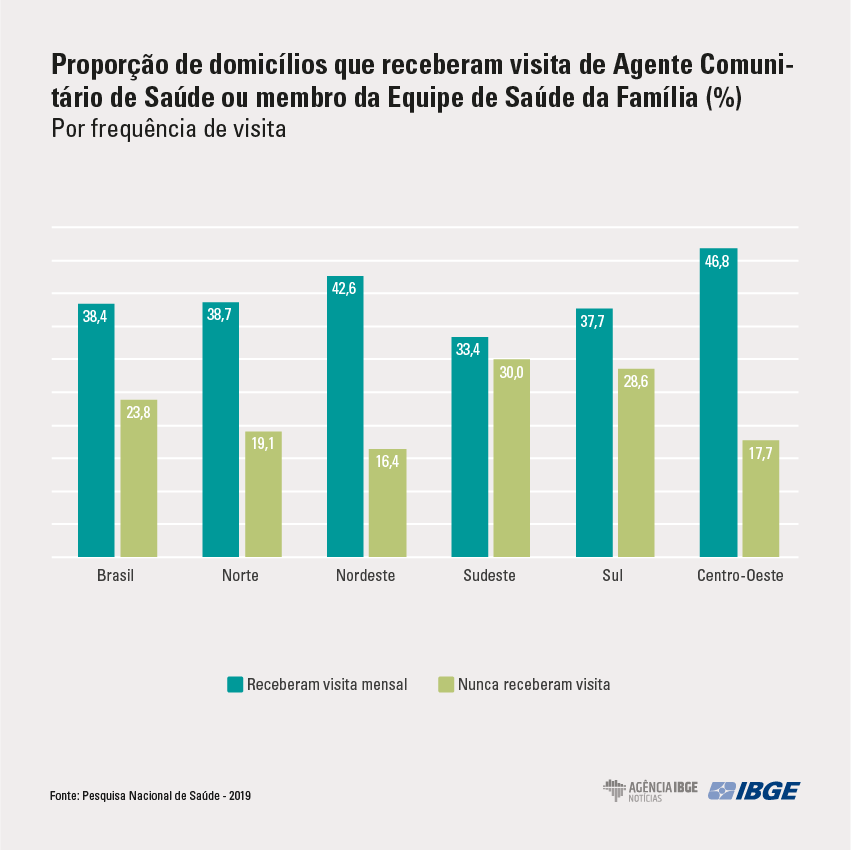 The visit of health agents specifically to fight against endemics like, for example, dengue, malaria and leishmaniasis was also surveyed. Such visit does not depend on the household registry in the USF and the percentages refer to all the households. In 2019, 64.6% of the households received at least one visit of an agent over the last 12 months before the interview, a drop in relation to the percentage recorded in 2013 (69.3%). Last year, while the Northeast (72.4%) and the Central-West (71.9%) posted the highest percentages, the South registered the lowest one (53.5%).

One out of four persons left their usual activities due to bone and joint problems.

Another issue unveiled by the survey was the percentage of persons who left their usual activities like, for example, working and studying, due to health reasons: 8.1% of them had done that in the last two weeks before the interview. The Northeast (8.7%) and Southeast (8%) registered the highest proportions. Concerning the age groups, elderly persons recorded the highest proportion of persons who left their activities (12.2%).

Among the reasons pointed out by these persons as impairments to carry out those activities, the most frequent were bone and joint problems (25.1%) and respiratory problems (21.0%). Gastrointestinal (8.8%), cardiovascular (7.1%) and mental (6.2%) problems also appeared among the most reported reasons. The survey also highlights that 12.7% of the persons who left their usual activities reported that the reasons were related to their works. 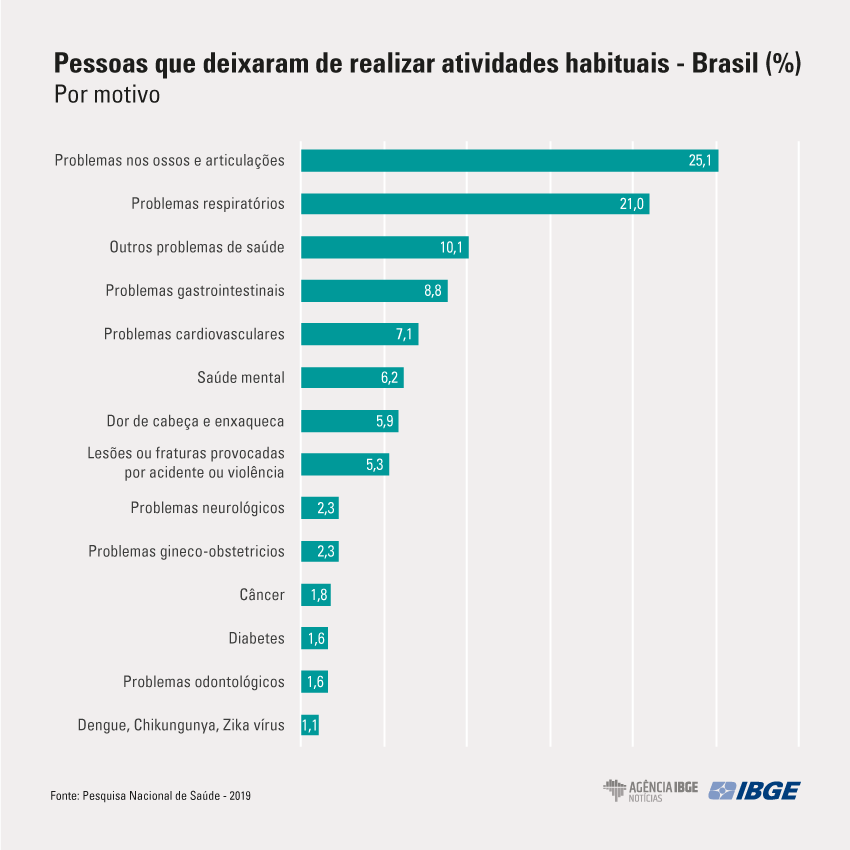 76.2% of the population had consulted a doctor in 12 months

The groups that received medical care showed a difference. The proportion of women (82.3%) who went to a consultation was higher than that of men (69.4%). Other groups that led the proportion were: white persons (79.4%), persons aged 60 years and over (86.9%) and those with complete higher education (84.6%). 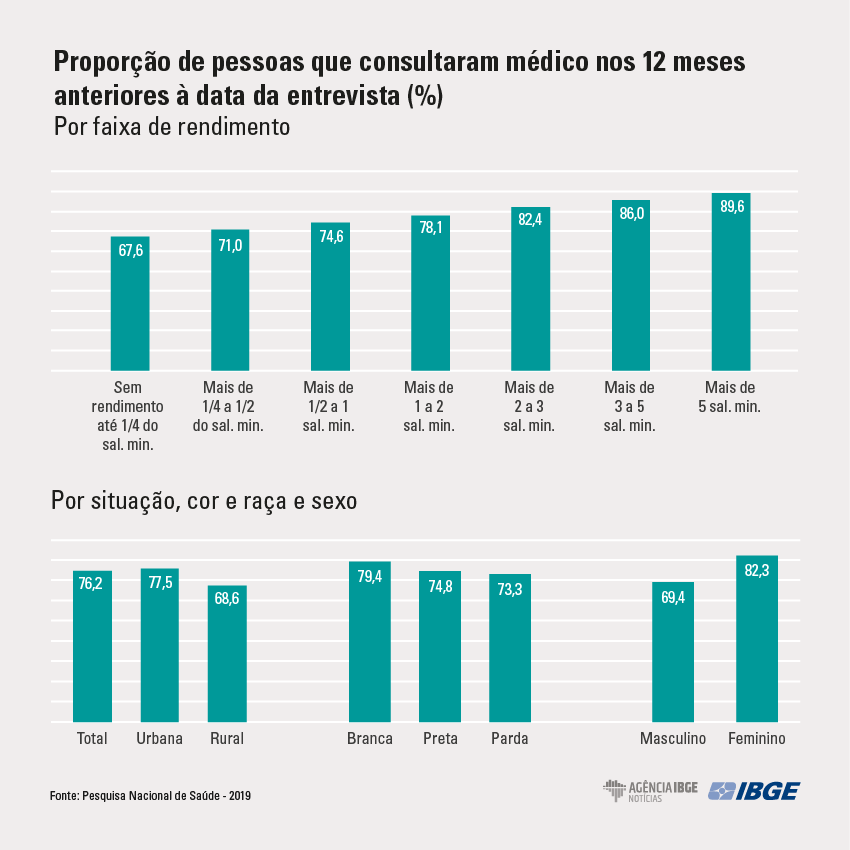 The proportion of persons who consulted a doctor in the last 12 months before the interview increases as the earnings increase.

"Maybe those with higher income have more conditions and more availability to consult a doctor," explains the survey analyst.

Less than half of the Brazilian population (49.4%) consulted a dentist in the last 12 months before the interview. In regional terms, the North (40.8%) and Northeast (43.3%) recorded the lowest proportions of persons who went to this type of consultation. Like medical consultations, the groups that posted the highest percentage were women (52.6%), white persons (55%) and those with complete higher education (70.4%). The age groups differed from medical consultation: in the case of dental consultation, the highest proportions were among persons aged between 18 and 29 years (55.5%) and between 30 and 39 years (55.2%).

The survey data point out that the care with dental health is still incipient in Brazil. "There is a recommendation that the ideal are two visits to the dentist per year as a form of prevention and less than half of the population went to the dentist in the 12-month period," says the researcher.

Of the 39 million persons that looked for some type of health care, 86.1% achieved it and, of them, 73.6% were assisted in the first search. This percentage was lower than in 2013, when 95.3% achieved such care. The percentages of medical care varied from 66.6% in the South to 77.6% in the Northeast. Among the persons who achieved health care, 60.9% had some medicine prescribed and 85% of them achieved all the prescribed medicines.

64.6% of the hospitalized persons used SUS 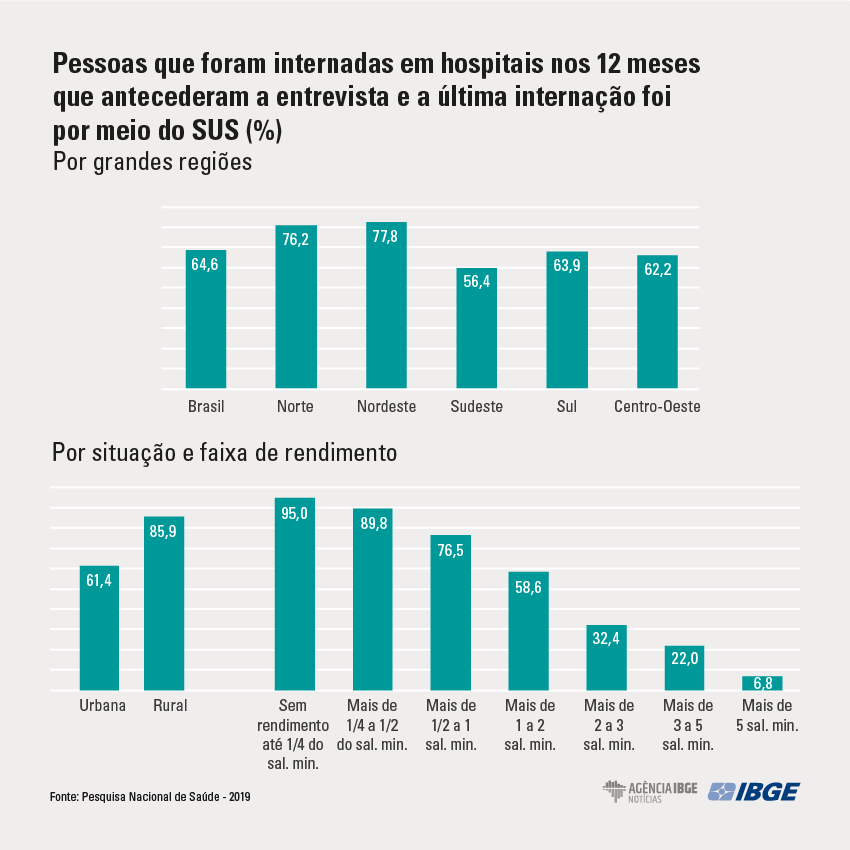 When the per capita household earnings are analyzed, there is also a difference between the persons who were hospitalized for 24 hours or more and the last hospitalization was in SUS: 95% of the persons with earnings up to 1/4 of the minimum wage were in this condition. "People with higher earnings have a health plan and, for this reason, they do not use SUS, which it is not the case of the population with lower earnings, which is more dependent on the public service," says Vieira.