Due to pandemic, 3 million persons got jobless in Brazil

As shown in the weekly edition of PNAD COVID19, released today (14) by the IBGE, nearly three million persons got jobless due to the pandemic. The unemployment rate reached 13.7% in the fourth week of July, hitting 12.9 million persons. 9.8 million were jobless in the first week of May, when the survey started. 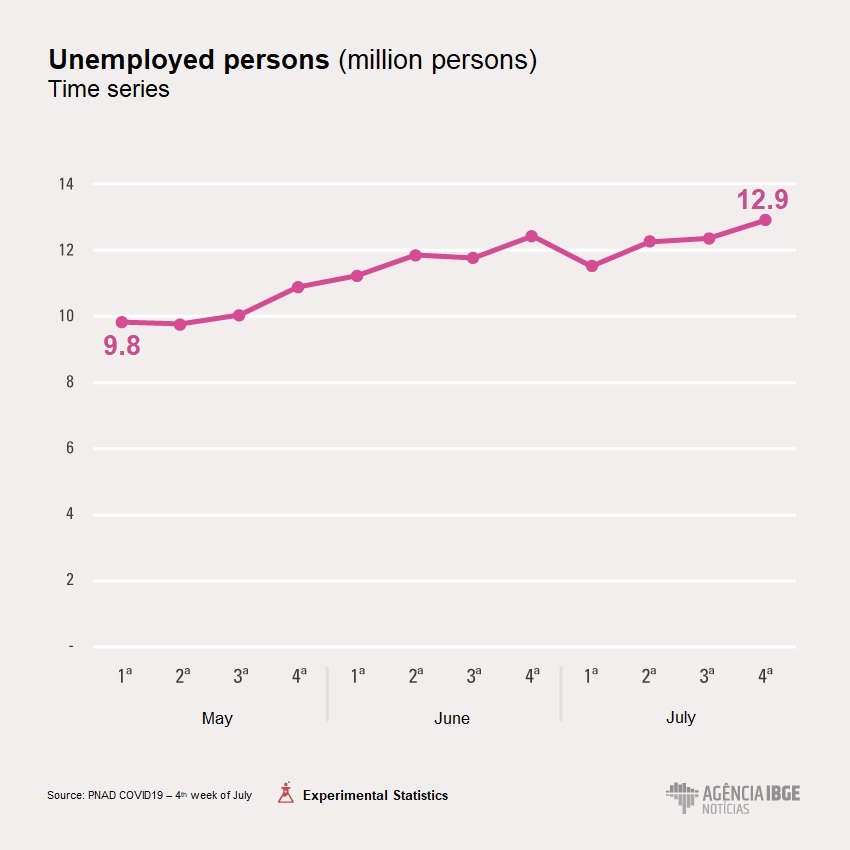 Vieira noticed that all the indicators on the labor market remained statistically stable in the fourth week of July, when compared with the previous week. The number of persons who were temporarily away from work due to social distancing added up to 5.8 million, after falling in the previous week. In the beginning of May, 16.6 million had been kept away from work due to social distancing.

The group of persons who alleged a reason other than social distancing to be away from work also remained unchanged, standing at 3.0 million. The contingent who worked remotely (8.3 million) also remained stable in the fourth week of July. In the beginning of the survey, 8.6 million were working at home. The group of persons who would like to work, but did not look for a job due to the pandemic or to the lack of work in the locality where they live, stayed at 18.5 million.

Only the proxy of the informality rate (33.5%) rose in the comparison with the third week of July (32.5%). It represented 27.2 million persons in the informality, nearly 2.7 million less than the contingent in the beginning of May (29.9 million).

"That population dropped in the release last week. It is a workforce that swings a lot in these short comparisons. People enter and leave the workforce very easily. Easier than the employed population, which is formal," say the survey coordinator.

14.5% of those who looked for care in hospitals were hospitalized

PNAD COVID19 also unveils that, of the 13.3 million persons who complained about any symptom of flu-like syndrome, 3.3 million looked for medical care in the fourth week of July. Of this total, 159 thousand (14.5%) were hospitalized in some hospital. When the survey started in the beginning of May, 26.8 million reported some symptom. Carried out with the support from the Ministry  of Health, PNAD COVID19 is a version of the National Household Sample Survey - Continuous PNAD aiming at pinpointing the impact of the pandemic on the labor market and at quantifying the persons with symptoms associated to the flu-like syndrome. Included as one of the products of the Experimental Statistics, the IBGE releases it on a weekly and monthly basis.