The life expectancy of the Brazilian population increased 3 months and 4 days, from 2017 to 2018, reaching 76.3 years. As of 1940, the amount of years added to the population's lives is 30.8 years. This is what the Complete Life Tables, released today by the IBGE, tell us.

“This phenomenon can be explained by external, non-natural causes, which reach more intensely the male population”, says IBGE researcher Mr. Marcio Minamiguchi. He emphasizes that in 1940 there was not such a noticeable difference in the younger groups. “From the second half of the 1980s on, the deaths linked to external causes gained relevance. It is a result of urbanization and includes murders, car accidents and accidental falls, among others”, he adds.

For both sexes, the highest life expectancy at birth was seen in Santa Catarina: 79.7 years. Other states with high figures, above the 78 years, are Espírito Santo, São Paulo, Federal District and Rio Grande do Sul. On the other hand, the lowest figures are in Maranhão, life expectancy at 71.1 years, and Piauí, in 71.4 years. That is, a child born in Maranhão, based on the life tables of the year 2018, would be expected to live 8.6 years less than a child born in Santa Catarina.

It is worth mentioning that the life expectancy varuies according to the year of birth and sex of the person. For example, a person aged 30 now will have an average life lenght different from the newborns - this is called survival estimate.

“Infant mortality has usually preventable causes and, mainly in the first years of life, is very much associated with the living conditions of the child. The better the sanitation, vaccine access and health care are, the lower the infant mortality rates become. If we manage to reduce the current rate by half, that will mean 15 to 20 thousand less deaths of children per year”, says Mr. Minamiguchi.

As for the states, the lowest infant mortality rate was found in Espírito Santo: 8.1 deaths of children under one year of age per 1,000 live births. The highest one, in turn, was in Amapá, with 22.8 per 1,000.

The mortality of children under one is an important indicator of the socioeconomic living conditions of a region. The rates in brazil are improving gradually, but are still far from those of the developed countries, even considering the states of Espírito Santo, Paraná, Santa Catarina, Rio Grande do Sul and São Paulo, with indices below 10 per 1,000. Japan and Finland, for instance, have rates below 2 per 1,000. Among the Brics countries, Brazil is closer to China, which has an infant mortality rate of 9.9 per 1,000. 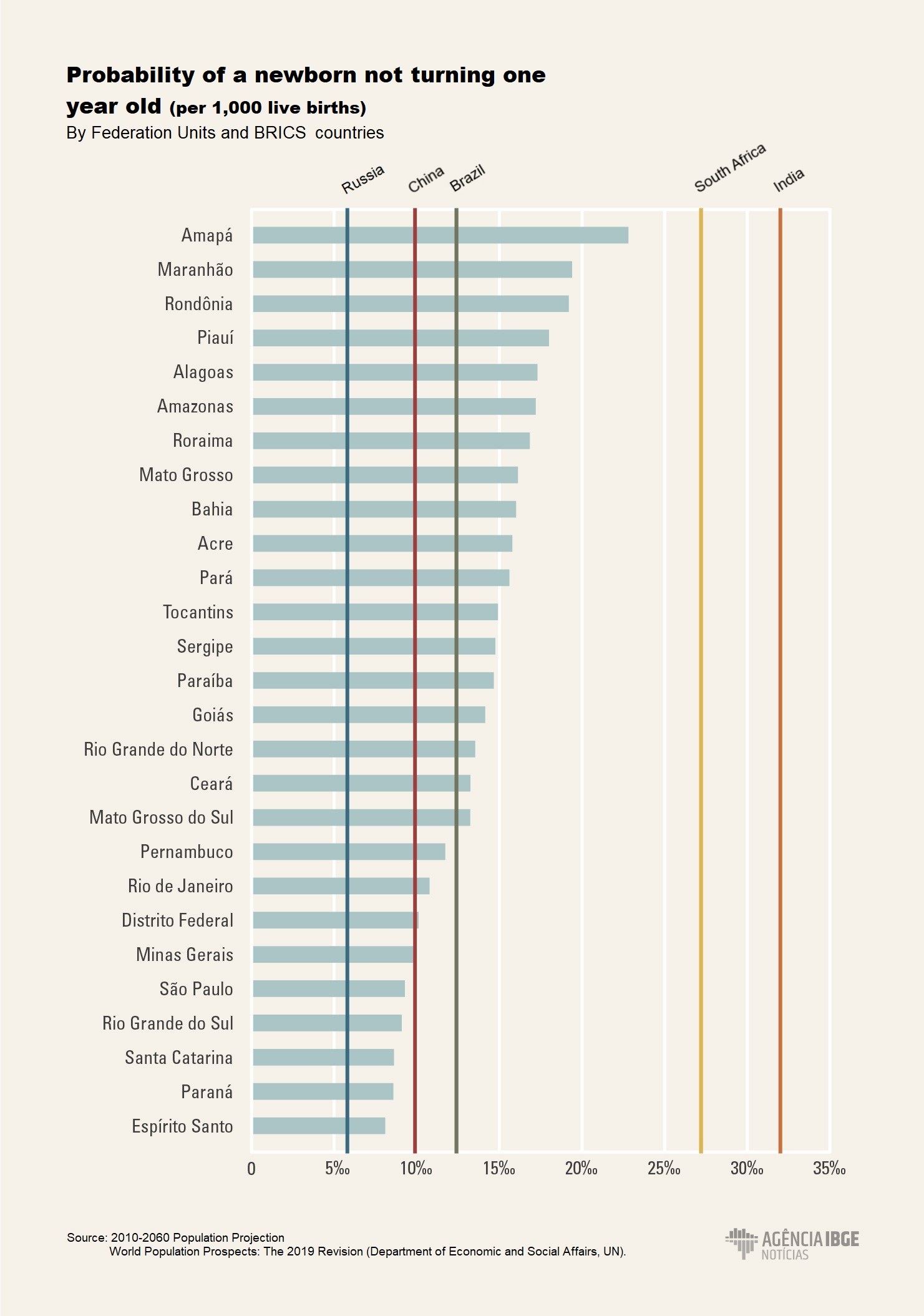