GDP falls in three states in 2017; Rio de Janeiro has the sharpest drop

Rio de Janeiro, Sergipe and Paraíba were the only states with a fall in Gross Domestic Product (GDP) in 2017 and accumulated the third negative consecutive annual result, according to the System of Regional Accounts, released today (14) by the IBGE. Last week, the institute revised the national GDP from 1.1% to 1.3%.

“In Rio, the drop in volume is linked to civil construction and trade activities and information and communication services. It is important to remember that we had the 2016 Olympics, so the basis of comparison is high. This also sharpens this fall,” explained IBGE Regional Account Manager Ms. Alessandra Poça.

The negative GDP changes of Sergipe (-1.1%) and Paraíba (-0.1%) are explained by the retraction of Industry, also driven by the Construction sector. “Sergipe has a direct influence on electricity, despite the fact that the Xingó hydroelectric power plant reduced the production in 2017 because of the reduction in the water flow. In Paraíba, the decrease is due to the manufacturing industries, ” said Ms. Poça.

Among the other 24 Federation Units, the 2017 high is the first after two years of consecutive declines, except for Roraima and the Federal District, which did not have negative changes in 2016.

In São Paulo, the state with the biggest economy in Brazil, the GDP varied by 0.3%, influenced by the negative results of Construction (-8.5%), Financial activity, insurance and related services (-3.3%) and Information and communication Services (-1.4%).

Results in Construction followed the national scenario (-9.2%) and the state has accumulated a decrease of 23.4% since 2014. The decrease in the volume of financial activities is linked to the decrease in credit operations for the second consecutive year and also to the Selic interest rate reduction. São Paulo is responsible for over 50% of the country's financial activity. 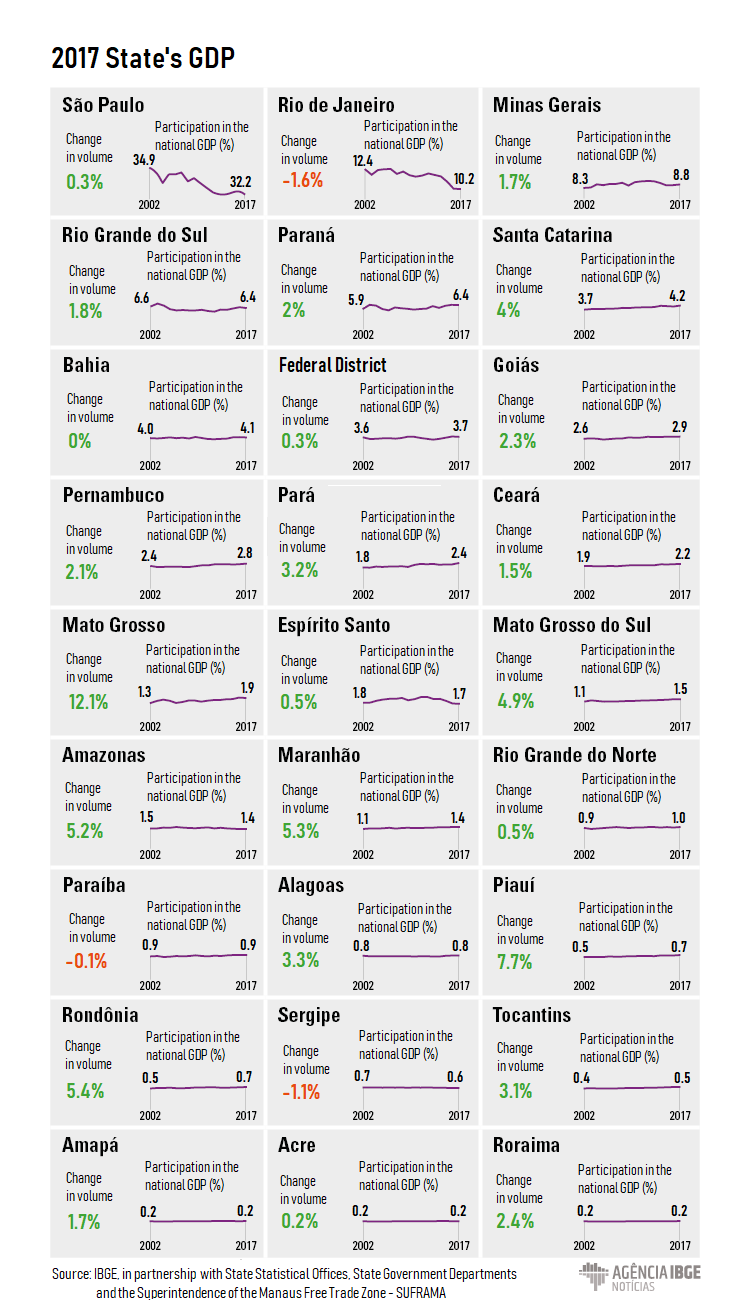 The Southeast and Central-West regions lost share in the national GDP between 2016 and 2017, a consequence of the participation losses of São Paulo (-0.3 percentage points), of Mato Grosso (-0.1 pp) and Federal District (-0.1 pp).

The participation loss in São Paulo is mainly due to Financial activity, insurance and related services, which reduced credit and deposit operations in Brazil.

Another sector that influenced the participation drop was Construction. “São Paulo is responsible for 30% of the Brazilian activity. So when we look at the construction activity in Brazil, it is 0.8 percentage point below compared to 2016. And São Paulo's share remains the same between 2016 and 2017. Thus, as a result the economy will lose share in the total Country's GDP, ” she said.

Per capita GDP of the Federal District is still the highest

In 2017 the Federal District remained as the biggest per capita GDP in Brazil, amounting to R$80,502, about 2.5 times higher than the Brazilian GDP. After the Federal District, the highest per capita GDPs were found in São Paulo, Rio de Janeiro, Santa Catarina, Mato Grosso, Rio Grande do Sul and Paraná, while Maranhão and Piauí had the lowest ones. Since the beginning of the series in 2002, those two states alternate in the last positions of the ranking.