Brazil has a lot to evolve in terms of visibility and representation of the black and brown population. In 2018, only 24.4% of the elected federal representatives declared themselves as part of this population share, which represents more than half (55.8%) of the country inhabitants.

The scenario is almost the same at state level: only 28.9% among the election winners for the Legislative Assemblies, in the same year, were blacks or browns. In the Senate, the situation is a little better. The 2016 election recorded 42.1% of blacks and browns among the winners for the respective city councils. Nevertheless, the figure shows an under representation, considering the national population.

The data are from the Social Inequalities due to Color or Race study, released today (13) by the IBGE.             The survey traces an overview about the racial differences in the country, from the data  collected by the Continuous National Household Sample Survey (Continuous PNAD) and administrative records from other agencies, like the Electoral Justice.

“Those representative indicators are important to monitor how these minority groups are inserted into decision-making positions”, explained the IBGE’s Population and Social Indicators analyst, Luanda Botelho. 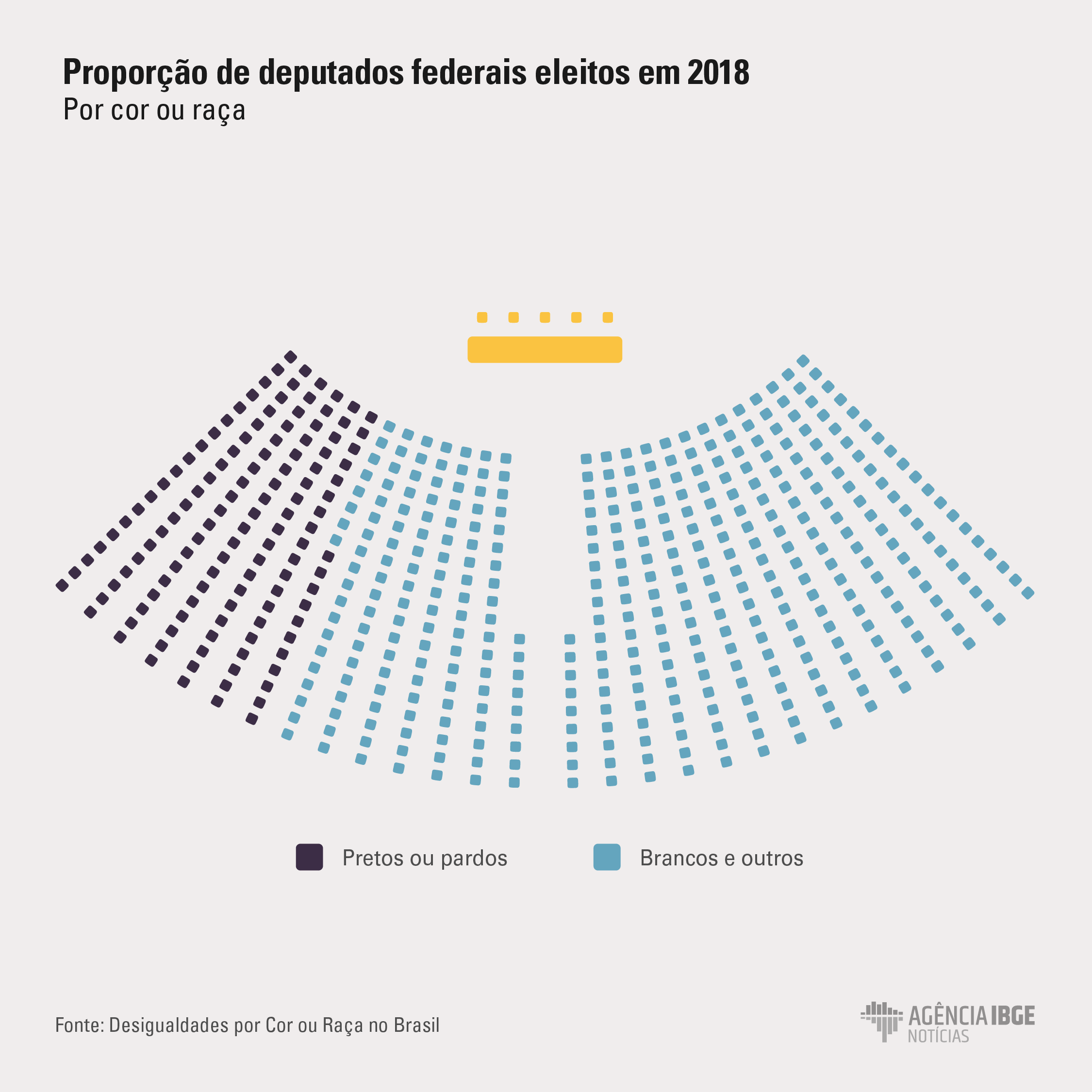 Lack of candidates does not justify this inequality

Besides the election statistics, the survey analyzed also the proportion of candidates for Federal Representatives in 2018.

The number of blacks and browns who ran for Chamber election were considerable bigger than those elected: 41.8%. According to Botelho, when comparing the figures, it is avoided to make a direct correlation between the lack of candidates and the under representation, since the percentage of candidates are bigger than those elected. The study considered the federal representatives elected in 2018, not the current Chamber composition.

The survey also showed the number of candidates according to the budget for the election campaign. “A lot of candidacy studies point out elements that make them more prone to electoral success. It becomes a vicious cycle for under represented groups.”, states Botelho. Among the candidates with a budget of R$1 million and more, only 16% were blacks or browns. 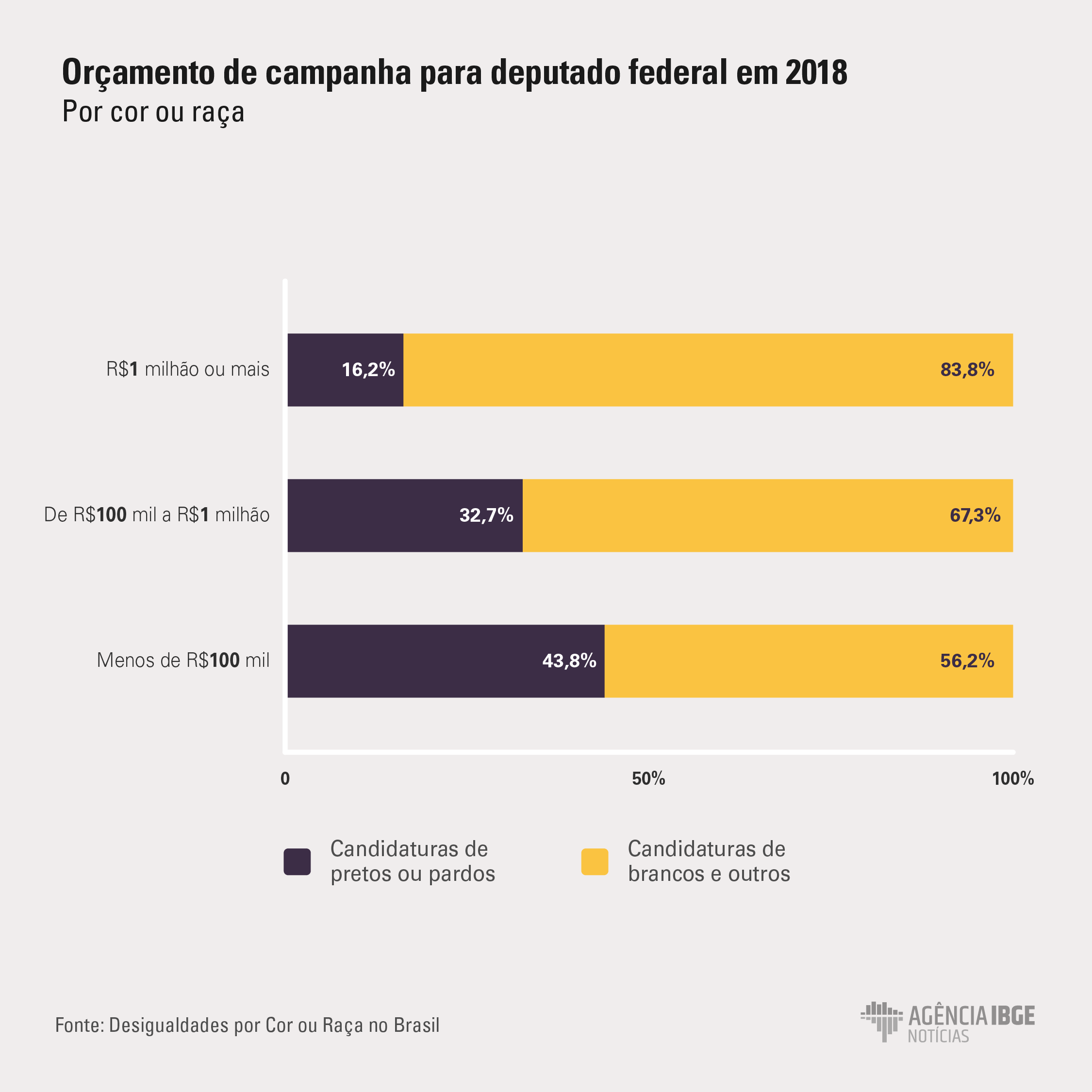 The actual situation of each Federation Unit was also recorded, regardless of the variation of population proportion of the states. Amazonas and Rondônia achieved the best rank, with a ratio of 0.93 and 0.90, respectively – with 1 as the perfect balance between the black and brown population rate and the federal representatives elected.

On the other hand, Rio Grande do Norte and Rio Grande do Sul did not have any federal representative self-declared black or brown. It is important highlighting that the Electoral Justice allows a candidate to not declare its race or color.

The proportion map between the population and the candidacies supports the explanation that the lack of black or browns candidates does not justify the under representation in policy. During this analysis, 11 Federation Units had a ratio between 0.75 and 1, close to balance. Only Paraná had a ratio under 0.50.

Under representation repeats in management positions

The study also showed inequality due to color or race among management positions in Brazil, where only 29.9% were occupied by blacks or browns in 2018.

The under representation is more visible when considering the earnings of management position employees. The report shows that the higher the salary, the less the occurrence of black or browns employees. 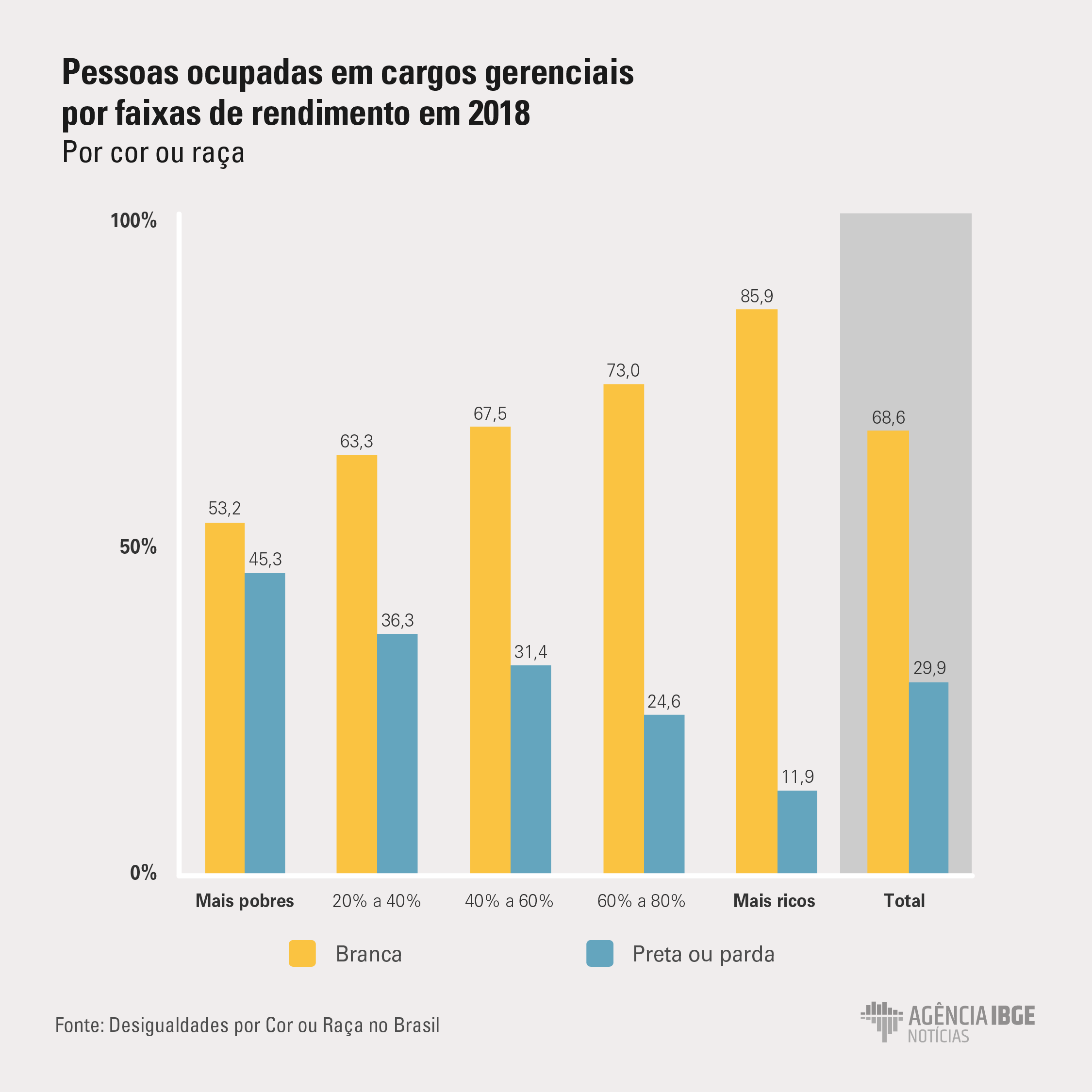 When analyzed the numbers of black and browns employed in management positions per region, the survey records that the North and Northeast have percentages above the national average: 61.1% and 56.3%, respectively. Nevertheless, these rates are still inferior to the proportion in the general employed population of, respectively, 78% and 74.1%, indicating the under representation in 2018.

“It is noticeable that a structural inequality exists among the population, whether with a favorable labor market or with an economic crises. Black and browns are in disadvantage in general, no matter the labor market situation”, says the IBGE’s analyst, João Hallak, who participated in the survey.

“This structural survey is fundamental to understand how this inequality is established”, concludes André Simões, the IBGE’s Population and Social Indicators manager.