“Urgent Measures”. The expression integrates the Sustainable Development Goals (SDG) 13 and reveals the international scientific community’s concern with climate change. Its causes, debated for decades, are linked to the increase of the carbon dioxide presence in the atmosphere, after centuries of industrial activities and accelerated growth in the cities. Its consequences can dramatically change the world's population life. This was the theme of the interview with Denise Kronemberger, IBGE general coordinator of the SDG and in charge of the articulation of Goal 13 in Brazil.

The original interview was published in the last Retratos edition (Retratos no 18), which will no longer be produced by the IBGE due to cost rationalization and expense reduction measures. 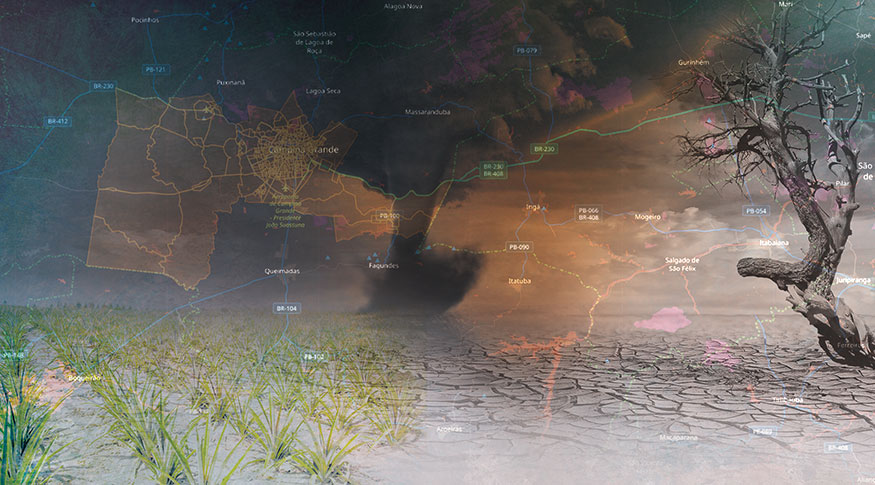 Retratos Magazine - “Urgent Measures” is an uncommon expression in the reports of international cooperation agencies. Why is it used in SDG 13?

Denise Kronemberger - SDG 13 focuses strictly on adaptation and mitigation. There is no other way, climate change is a reality and the world needs to be prepared to increase its resilience against those extreme events – like more hurricanes and the enlargement of desertified areas – that will reach vulnerable populations. That is why the goal tackles “taking urgent measures”.

Retratos - What is the Census importance for this SDG?

Denise - To talk about our adaptability to these extreme events, we need Census’ detailed information. With it, the IBGE’s Department of Geography can carry out the georeferencing of the census sectors’ information and develop the polygons for risk areas. The local scale of the SDG 13  is being discussed all over the countries. Furthermore, there is Civil Defense information, codified by the Ministry of National Integration, that has a database with numbers of the affected persons and deaths. And there  is also the Survey of Basic Municipal Information (MUNIC).

Retratos - Until now, three indicators for the SDG 13 were defined. The first one will measure the number of deaths, missing persons and affected persons in the disasters caused by climate change. What are the sources for these indicators in Brazil?

Denise - The Civil Defense of states and municipalities. The Ministry of National Integration consolidates it. It is a challenge faced by the IBGE. We do not have all the information, it has to be a cooperative work. That is why there is a relationship with SDG 17, which talks about partnership and implementation.

Retratos - The second indicator is about the number of countries that adopt and implement national disaster risk reduction strategies. What are its major aspects?

Denise - It makes a lot of sense for UN Disasters. The first aspect is “Which are the countries that still lack national strategies in line with the international recommendation?”. Later on, it will be necessary to evaluate the efficiency of those strategies, including a monitoring and alert system, as the one we already have in Brazil carried out by the National Center for Monitoring and Early Warnings of Natural Disasters (CEMADEN). The goal is always risk reduction, and not only of landslides but also of tropical diseases and agricultural damages, for example.

Retratos - The third indicator is about the local government that adopts and implements local disaster risk reduction strategies in line with national strategies. Is Munic the main source?

Denise - Yes. And we can see once more the IBGE importance in the information production for the SDG 13. This indicator was built with 25 variables that reveal the municipal structures to handle disasters, as well as  the existence of the mapping of disaster-prone areas mapping and housing programs to reallocate the low-income population. All these to enhance the population’s resilience and ability, in case of flood disaster, for example, to adapt themselves and reestablish the initial balance. From that kind of information, it is possible to decide where to use public resources, since they are increasingly scarce.

Retratos - In addition to those indicators, are there any others to be included in SDG 13?

Denise - The Greenhouse gas emition. A great part of countries already have information made available, as they report to the Climate Convention. In Brazil, the Ministry of Science, Technology, Innovation and Communication obtains this piece of information annually, besides  the National Greenhouse Gas Inventory. Although, while this indicator is not considered globally, we are not going to deal with it.

Retratos - The methodological patterns of five indicators for SDG 13 were not concluded yet. How is this being dealt with?

Denise - This year, the Climate Change Conference will certainly indicate some replacement. It is a long process that involves specialists and the several national statistical institutes. The indicator of sustainable agriculture, for example, is still being discussed along with the UN Food and Agriculture Organization (FAO). SDG 13 consists of eight sub-indicators. There are countries that do not even have all these data. It is a challenge. We are dealing with subjects that have never been handled before. The environmental information is new, it does not have the same tradition of social and economic information. And that is not true only of Brazil.