One of the most important topics of the Federal Constitution which became 30 years old in 2018, the right to quality jobs is addressed in several parts of the Brazilian Charta. The relevance is such that one of the most discussed issues nowadays is the labor reform. Today the challenge is to keep the workers protected without prejudice to the creation of the necessary jobs to reduce the country's unemployment rate.

Art. 1 The Federative Republic of Brazil, formed by the indissoluble union of the States and Municipalities and the Federal District, is constituted as a Democratic State of Law and is based on:

IV - the social values of work and free enterprise

IBGE Coordinator of Labor and Income, Cimar Azeredo points out to to the social character of the text approved in 1988, and highlights the collective effort to reduce inequality: “The Citizen Constitution was meant to provide the people with the possibility of the exercise of citizenship. A little after it, the ILO [International Labor Organization] introduced the fight for decent work, the one which is carried out with freedom and equity. That is crucial to overcome poverty, reduce inequalities and democratic government”, he says.

“The process [of writing the Constitution] was a great effort in one of the constitutions which best protects workers and decent work. It emerges at a time of democracy rebirth, since the country had just gotten out of a military regime. At that moment, it worked as a guarantee of rights”, Cimar expalins.

According to the planning and research technician of the Institute for Applied Economic Research (Ipea), Sandro Pereira, there were three distinct moments in the labor market after the 1988 Constitution: "The first occurred during the 1990s and early 2000s, with the strengthening of flexibilization. In 1989, we had 24.5 million formal workers, and we only came back to the same level in 1999, when we reached 24.9 million. Meanwhile, we had the economically active population increase by more than 30%. Informality has emerged and become a major issue. "

The Ipea technician highlights that, since 2004, economic growth has allowed jobs to be created without major changes in the constitutional text, not even after the increase of rights to domestic workers and increases in the minimum wage.

"From 2004 to 2013, there was an average of 1.9 million per year of created jobs. During this period, there was practically no change in the labor regime. We've heard expressions such as 'labor force black-out' and 'full employment'. In 2014, we had the heyday of formal workers: 49.5 million," says Pereira.

The negative economic scenario after 2015, however, and the austerity policies that came along fueled a new discussion on labor rights and their flexibilization. "In 2016, the GDP fell with the same intensity and there was a new 2-million-job loss," explains Pereira. To offset this trend, the labor reform was approved in 2017." The paradigmatic axis of the reform was flexibilization. The biggest change in labor legislation since the CLT," he adds.

In the more recent context, Cimar sees a scenario of precarious labor market in the last few years, with the increase in informality. "It is a consequence of the economic crisis. It is a precarious labor market, with many informal workers and underemployment. A significant amount of unemployed, totaling 27 million underutilized persons. It is very difficult for you to predict what will happen in the future due to the changes," he says. 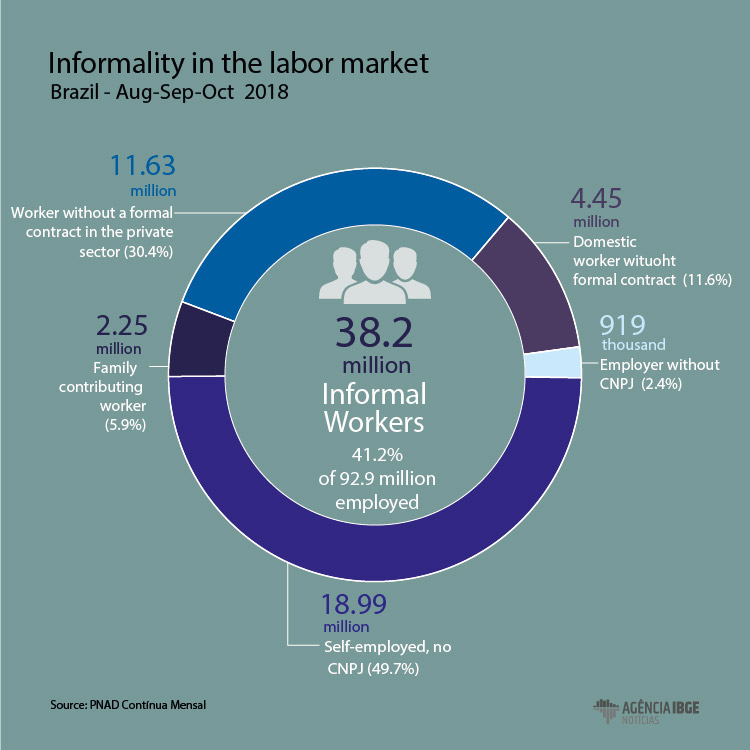 The Continuous National Household Sample Survey (Continuous PNAD), coordinated by Cimar, monitors the labor market and generates a number of indicators that measure the level of formality in public and private markets. "In addition to the worker, the survey investigates persons out of the market or underutilized," he adds. "Nowadays, it is one of the most avant-garde surveys in the world, but we must go on, keeping an eye on the changes," he claims.

One of the variables monitored by the Continuous PNAD in terms of underutilization is the discouraged population: those who would like to work and would be available as well, but gave up looking for a job because they believe they wouldn't find them. 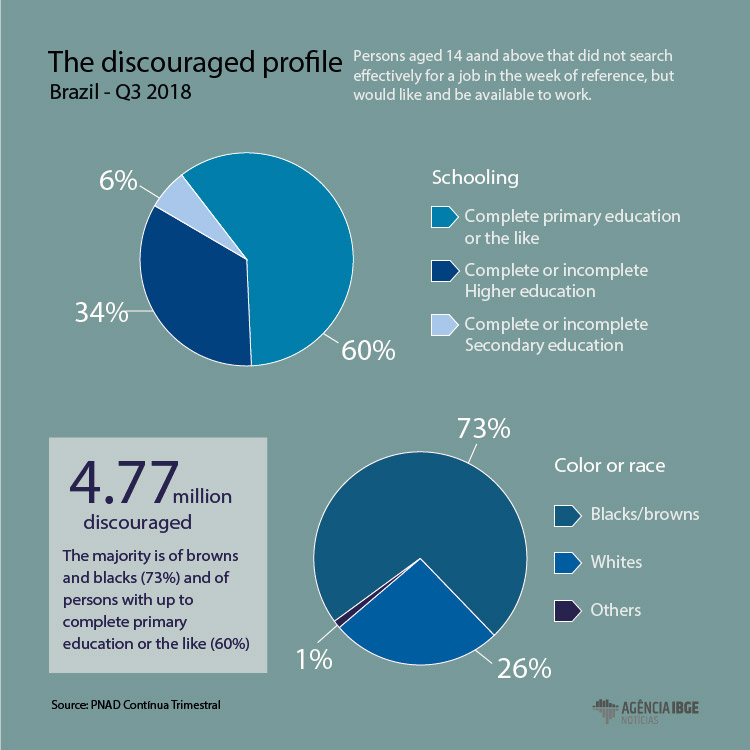 Graduated in communication, Pedro Câmara, 29, went through this situation for 15 months before he got in the job market again in 2018. "The market in my area was tough. I thought about studying, but it is difficult to invest in yourself when you just have your savings, severance pay and the FGTS (guarantee fund payment for labor length) to pay the bills," says Pedro.

After recovering from disease, he was finally able to return to the market: "It was no use insisting on looking for jobs that did not exist or accepting worse jobs. I sought for treatment, underwent a recovery surgery and, after six months, the market improved and I got a better job than I had before." he adds.

Even with the improvement that allowed Pedro's return to the market, the moment is still delicate. "We are still in a very uncertain scenario, because our economy has not been decreasing, but it has not been growning very much. It is estimated that we will only reach the pre-crisis level in 2021 or 2022 and this affects the labor market," says the Ipea researcher.