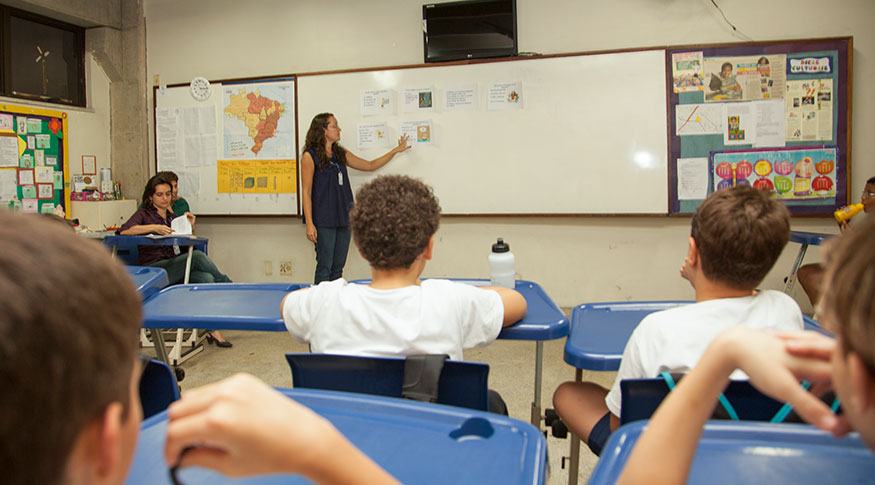 Besides being the election month, October 2018 marks the 30th anniversary of our Federal Institution, which was celebrated on the 5th. Because of its potential of social transformation, education (together with culture and sports) is approached in a whole chapter of the 1988 Magna Carta, which defined seven principles for the topic: liberty, gratuity, pluralism of ideas, professional valuation, quality, democratic management and national minimum wage. In spite of being one of the central issues in the discussions of the National Constitutional Assembly, still nowadays education is far from what we dreamed of, as shown in this report, in a sequence to the Citizen Constitution series.

“Education was almost an absent theme in our first republican constitution, of 1891, education was an almost absent a educação é um tema quase ausente. It can be seen in the issue of voting, with the prohibition of illiterate voting, and institutes secular teaching in the state”, highlights the full professor of Physical Education of the Federal University of Rio de Janeiro (UERJ), José Gonçalves Gondra. He says that one of the advancements of the 1988 Constitution was the idea of a National Education Plan, which had its first edition released in 2014, only.

“That is the first time in history that we have a national education plan stating 20 great targets to be reached from 2014 to 2023. The PNE brings the progressive increase of the GDP share to be invested in education. The idea of the plan is to erradicate illiteracy, to make basic education universal, as well as to expand higher education and the formation of researchers", says Gondra.

The 1988 Constitution has made basic education icompulsory. Today, since the changes effected in 2009, the constitutional text has guaranteed access from pre-school on, until the end of High School, but not included Higher Education and daycare.

“In primary and high school you have to supply the demand for education for a huge population, which ends up taking place mainly in public education. When it comes to higher education, the government provides public education institutions but private ones have a chance to expand the offer and reach those persons who cannot join public universities, due to their limited supply of positions", says the IBGE analyst, Marina Águas. 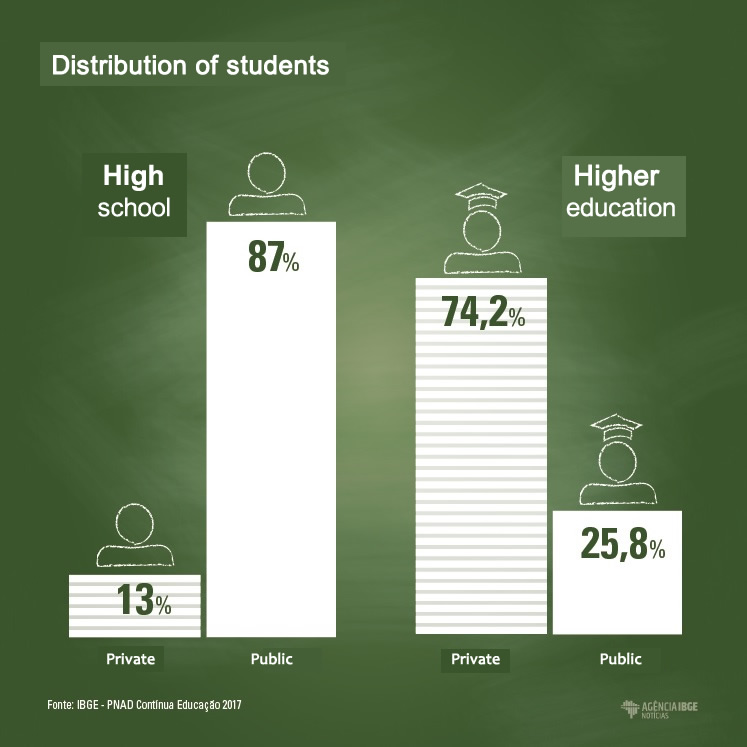 Illiteracy, a basic indicator in terms of education, has evolved in Brazil as years go by, though not at the desired pace. Once a problem of alarming proportions in Brazil, the problem is nowdays focused on the elderly population that did not have access to education in the past.

“Illiteracy, today, is much more a matter of 'stock' than of the presence of new illiterate persons. Those who are being educated now will be literate. The problem is the person who has never been part of this cycle, which is our 'stock' of persons who cannot read or write", says Marina.

She says regional differences regarding illiteracy are also a serious problem: "When you go to the Federal District there are 2.5% of illiterate persons, whereas in Alagoas they make up 18.2%. That is something that has to be considered”. 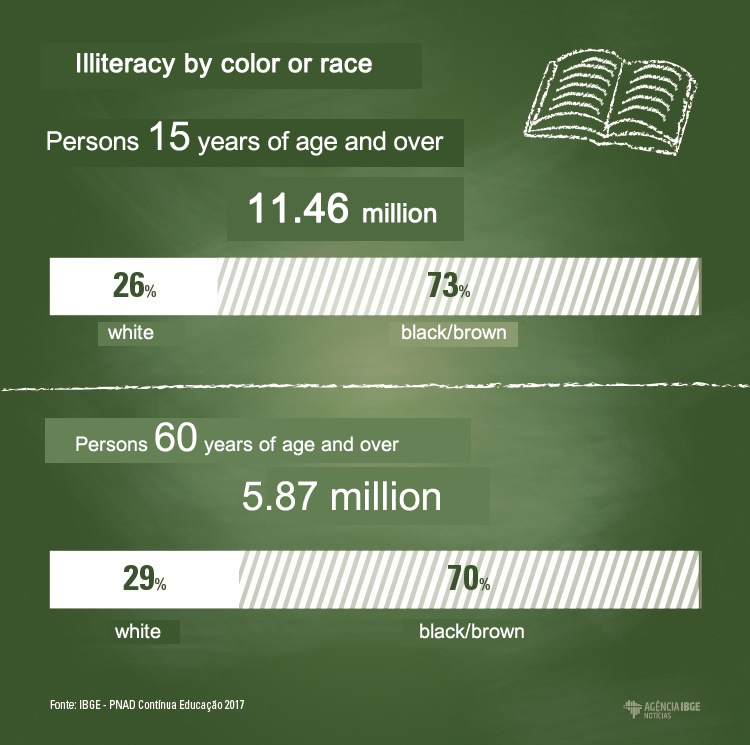 According to Marina, the color of one's skin in Brazil is an essential element in the analysis about uneven access to education: “It is a social issue because the color is related to a structural matter regarding the poppulation's income. It points to a certain vulnerability. We know that the illiteracy rate, for example, among blacks or browns and white persons varies significantly”.

“A lucky person”, says Ernesto Mané Junior as he sees himself as an exception in the Brazilian reality. He is a PhD in Physics from the Manchester University, in England, and since 2014 is a diplomat working for the Brazilian Ministry of Foreign Affairs. A black man, he believes his sucessful academic and professional path is ot only of matter of deserving it:

“My background history was very favorable to some extent. I come from a middle-class family, I had my primary education in private schools and, for my own choice, joined a public technical school for secondary education. The heritage from my cultural capital is definitive. In this respect, I was lucky”.

Nevertheless, a more comfortable social position did not prevent racial prejudice from affecting his professional and academic growth, even in subtle ways. “I was one of the few black student in class. That was always almost a rule”, he recalls. “I felt prejudiced against even in England, though that was disguised. I had the feeling of being an exotic person, of being an impostor”, says the diplomat. 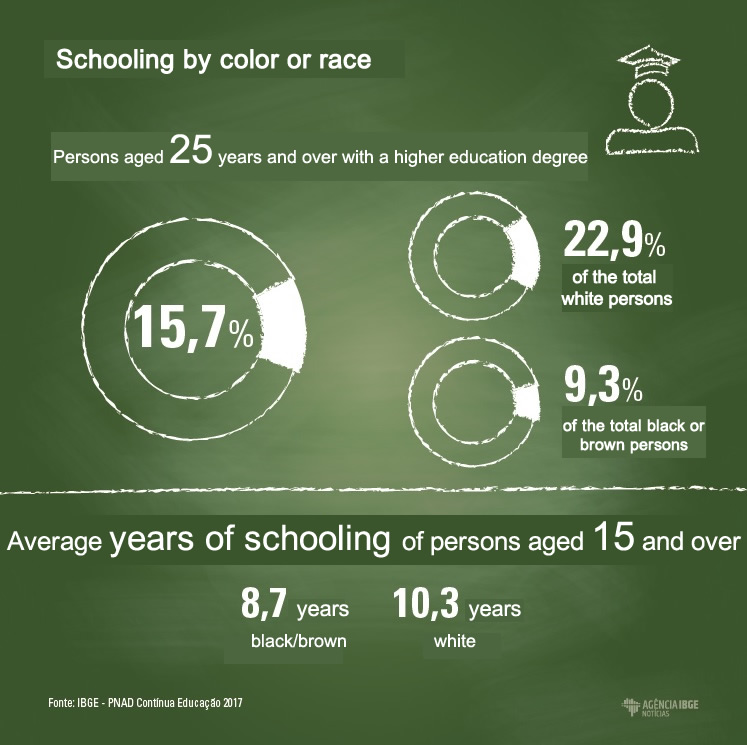 Today, the uneven access to education is still easily seen in data collected by the IBGE, a reality against which the 1988 Constitution gve the first step against. His own way, diplomat Ernesto tries to talk back: “I work as a volunteer tutor of people who try to pass competitive examinations, mainly black persons. The youth from the city outskirts can hardly find someone to believe their potential; many say they will become criminals, that they area worthless. I am starting from scratch”.