In 2016, four in ten persons make voluntary work in Brazil They were 6.5 million persons in absolute numbers, which represents 3.9% of the population aged over 14 years. This information was unveiled in the Other Forms of Work module of the Continuous National Household Sample Survey - Continuous PNAD, which also points out that the proportion is slightly higher among women (4.6%) than men (3.1%) and higher in the North (5.6%) and South (5.0%) Regions, whereas the Northeast (3%) registered the lowest rate.

The survey considers voluntary work the work that is not compulsory, doesn´t pay any compensation in cash or benefits, and that is carried out at least one hour per week. Moreover, this type of work must produce goods or services to third parties, i.e., persons who do not live in the same house of the volunteer and who are not their relatives.

According to Alessandra Brito, researcher at the IBGE, as it is a new theme, this figure tends to increase in future surveys. "Now that we are disseminating what is voluntary work for the Continuous PNAD, people perceived to be making it: it is not only NGOs, but, for instance, those who always help their neighbors, either changing light bulbs or making other services", explained her.

The survey unveiled that most of the persons who claimed to be volunteers, did it through either Non-Governmental Organizations or enterprises (91.5%). The rest of them did it individually. Concerning the places where the voluntary work was made, 81.5% were in religious congregations, condominiums, unions, parties, schools, hospitals and nursing homes. Although NGOs are well known for providing such work, they were cited, together with other associations and groups, as a workplace by only 12.8% of the volunteers.

By including these new forms of work in the survey, as well as the definitions of voluntary work of the International Labor Organization - ILO, Alessandra states that the IBGE followed what was agreed in the 19th International Conference of Labor Statisticians. "The IBGE pioneers in incorporating this assessment in household surveys", states her. 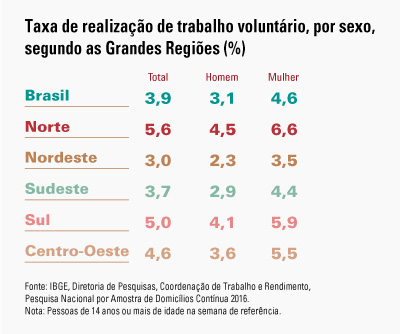 For her, the best compensation for the voluntary work is giving her time to meet others, a like-to-like offering not moved with pity. "Because you cannot make any voluntary work or offering work if you look at the other with pity. Our project is called Viva e Deixe Viver. This is a Buddhist expression that means: live your life and let the other live his/her life, regardless whether his/her life is in a good moment or not. You cannot interfere. You will never feel the other´s pain. What you can do is mitigate the other´s pain through a positive look", explained her.

After retiring in 2005, Regina returned to Rio de Janeiro and launched the Rio de Histórias (Rio of Stories) Institute, which works in 24 hospitals in the metropolitan area. Concerning the low percentage of volunteering in Brazil, Regina remarks how hard was to attract volunteers in the beginning. In spite of considering it a nice work, people did not join it, because they were afraid of hospitals. According to her, this fear is deconstructed during the initial training. Mainly thanks to word of mouth, currently many people look for it and enroll in the project: "Although we have a long training, 30% of the volunteers quit in the first three months of work", told her.

According to PNAD, the voluntary work rate is higher among women and employed persons, which is also noticed in every Major Region. In the Viva and Deixe Viver Association, women in the labor market are also the majority. According to Regina, women with this profile "find time and need to make anything besides the formal work in order to spin the wheel".

A hint from the founder of the Institute for those beginning to volunteer is to follow their personal taste and make something that pleases them. "Many times we don´t like our work, but we need to survive. Yet, whenever you have the opportunity to either give yourself or your time, you have to choose something that really makes you happy".

Community of Alemanha in Maranhão

José de Ribamar Goes, 49, carries out voluntary work in the community of Alemanha, neighborhood of São Luís lacking services that should be provided by public authorities. To overcome this need, the resident frequently distributes food baskets to humble families and also promotes sport activities for children helped by partners and friends.

"I have been carrying out these activities for 25 years. I saw other persons helping and it inspired me to do the same", highlighted the resident, who stated  that he also arranges other activities to raise funds for poor families in that region, in which a large number of low-income families live in stilts.

Not only the residents of the Alemanha neighborhood benefit from the solidarity of Cheiroso, how he is affectionately known since childhood. People from the communities of Apeadouro, Santa Júlia / Vila Palmeira, Fé em Deus, Liberdade and Camboa also receive food baskets and sport activities, adding up to more than 1,300 families in the entire region.

Homeless and immigrants in Santa Catarina

According to the data from the Continuous PNAD, the South Region recorded the highest proportion of persons who carried out voluntary work on an individual basis (11.0%). An example is the 60-year old retired Ângela Olinda Dalri.

"I know that she is late, but she really comes."  This sentence became a commonplace among homeless people who gather at 8pm on Thursdays at the Florianópolis Cathedral plaza to taste the infallible and substantial soup of this lady. When the city became virtually impassable on January 11, due to one of the hardest rainfall over the isle, Ângela arrived at 9:15pm. "Some other people who distributes bread and juice also on Thursdays didn´t come and we ran out of soup for the first time since 2008", tells her.

Without any support from NGOs or any other volunteering entity, she cooks at home enough food to fill from six to eight 20-liter jars. "It usually accounts for 120, 130 persons. I take milk cartons to serve the soup", explained her. The solidary initiative began 10 years ago, caused by a family tragedy. Her only child, Eduardo, was found dead during a trip to Japan in September 2007. Ângela got depressed. She gets touched even today and doesn´t like to talk about this.

Besides fixing soups, the retired woman helps Haitian refugees. She rents a house in the neighborhood of Carvoeira where 17 Haitian persons currently live, four of them unemployed. "Those who work pay R$270 per month", told her. According to her, the amount paid doesn´t cover the expenditures and she pays the pending costs on her own.

The help to the Haitians also involves escorting them to public bodies to register for official documents, helping them to write a resume and look for a job. Ângela is now focused on helping an Haitian couple to bring their four children left with their 98-year old grandmother in Haiti. The idea is to raise R$12 thousand in a raffle to be run in May.

Chama and Nova Acrópole in Ceará

Mariana Moura is a psychologist involved in a voluntary work in the Humanitarian Center for Motherhood Support - CHAMA, a group that supports pregnant women in situation of vulnerability. She is also a volunteer in Nova Acrópole, a NGO that works with philosophy.

In the CHAMA project, Mariana sheltered either homeless women or those who suffered violence from their husbands or even those who were expelled by their families and had no place to go. "We support the immediate postpartum and nursing, which is a moment when women are quite vulnerable due to anxiety and psychic aspects and they need the follow up of a psychologist", explained her.

Agláia Tavares is an IBGE servant for 17 years. She works with hand-woven wool caps for the Octo project, which donates crochet octopuses and caps to premature children born in neonatal units. The servant spends at least two hours per week to produce the small caps.

The donation aims at keeping the babies calm and sheltered and replacing the tubes of the incubators for the tentacles of the octopus, as children tend to grasp them. As the IBGE servant doesn´t work with crochet, but rather with knitting, she began to produce caps instead of octopuses to warm the premature children in the cold maternity hospitals.

Agláia began to work as a volunteer in projects that received the caps in 2016, firstly for a university hospital and later for the Octo project. She says that she coupled skills and pleasure of the handwork with the will to be solidary: "It is a very good hobby. Why not using this hobby to help someone?", concludes her.

Get to know other stories on volunteering in the March edition of the Retratos Magazine here.