In operation since October, the Census of Agriculture unveils the regional diversity inasmuch as the enumerators advance in their work. The IBGE News Agency traveled to Maranhão to visit the municipalities of Presidente Dutra, São João dos Patos, Balsas and Riachão to check the data collection and the characteristics of this state.

The Census remains accelerated in the municipality of Presidente Dutra, distant approximately 350 km from São Luís and located in the central area of Maranhão.  The reporter followed up the census in Caiçara Farm, owned by Edimar dos Santos, 69 years old, who opened the gates of his property and told us a little bit about his life. To arrive there, you have to take the Lagoa da Onça road, off the BR-135 highway, pass through slopes and cross one of the arms of the Preguiças River.

Arriving at the destination, we are rewarded with a unique landscape. As soon as you enter it, a weir for refreshing animals wonders visitors, despite the low level of water. The property has approximately 65 hectares, in which cattle, goats, sheep and hens are raised and whose products he sells or use for own consumption. Due to high temperatures in this area, fires are one of the concerns of Edimar. They can be seen along the way from São Luís to Presidente Dutra, where vegetation and properties are completely destroyed by fire.

The producer told us that a fire began close to a power station in 2006 and quickly spread, reaching his property. As a result, Edimar had most of his land destroyed and even lost some animals he was raising at that time. Since then, he recovered everything and takes care to avoid fire spreading in the farm. Answering the question of what would he do if he had a chance to change his life, the farmer told that he is happy with his daily life. "I feel very well here. I can go to the creek to eat my piaba [river fish]. At night I watch television and so life goes", told him smiling.

The data of the Edimar´s property were collected by enumerator Jaymara Araújo, 21 years old, who attends the third period of Arts at the State University of Maranhão - UEMA and is happy to participate in the Census of Agriculture. She worked together with a census agent, supervisor Vivian Cristina de Souza.

"the experience has been very aggregating. Besides getting new knowledge, I am meeting people", stressed the student. Locating agricultural establishments is one of the difficulties reported by Jaymara, though it is being overcome with the help of the GPS installed in the Data Collection Mobile Devices - DMCs.

The reporter also visited the municipality of São João dos Patos, in the east of Maranhão, distant about 540 km from São Luís. Located near the border with Piauí, the city has an estimated population of slightly more than 25 thousand inhabitants and an economy mostly based on agriculture.

Having a small urban center and streets paved with cobblestone, São João dos Patos also keeps a past that amazes visitors. This is because the city was governed by Joana da Rocha Santos, Mrs. Noca, whom a number of scholars consider the first woman to be a mayor in a Brazilian city.

The reporter talked with Mirelle Sousa, 19 years old, census agent and supervisor of the Census of Agriculture at the IBGE unit in São João dos Patos. The young lady told that she is excited with this activity, in which she sees an opportunity to grow in professional terms and get prepared for the labor market.

"As a professional experience, working in a foundation like the IBGE is very good, because we can get a very good experience, not only in carrying out the census and collecting statistical data of our country, but also knowing more about our reality", told Mirelle.

In São João dos Patos, the reporter followed up the census in the property of Mr. Evangélio Lima, 45 years old, who owns a property in the village of Marruás, off the BR-230 highway. He lives with his wife and children where he mainly raises cattle and sheep and has a crop, which is a source of income and food for the family. Living there since childhood, the producer said that he doesn´t plan to change his life. "We have to make do with what we have", reflected him.

Located approximately 800 km away from São Luís, the municipality of Balsas, in the south of the state, is one of the major centers of agribusiness in Maranhão. The city is the biggest producer of soybeans in Maranhão, which even attracts foreign investments. It is expected that this grain remains strong in the regional economy, since a good harvest is expected in 2018.

Balsas belongs to Matopiba, a denomination that gathers cities located in the states of Maranhão, Tocantins, Piauí and Bahia, which, altogether, are responsible for an important agricultural frontier in Brazil where grains are highly produced. According to the IBGE´s Municipal Agricultural Production - PAM, 234,491 tonnes of soybeans were produced in Balsas in 2016, which put this municipality as the major producer of this grain in Maranhão.

One of the objectives of the Census of Agriculture is to obtain more details about this production, as well as about other crops existing in this region. According to the IBGE´s initial estimate, Balsas would have about 1,700 establishments, of which more than 1,450 (84%) have already been enumerated, indicating that the preliminary figure can  be overcome.

"We received all the required support to carry out our work and we count on a well-trained team of enumerators. Every enumerator is in the countryside without considerable difficulties and we are carrying out a work in line with our expectations", highlighted Joana Araújo, IBGE´s census supervisor at the Balsas unit. Graduated in Agronomy, she tells that she had previously worked in IBGE surveys and saw an opportunity to get experience in her area with the Census of Agriculture.

Located just 70 km from Balsas, Riachão also lives on soybeans, ranking in the fifth position in the list of the biggest producers in Maranhão. Enumerator Marcos Vinicius is one of the persons in charge of collecting data in that region and stated that he has not been facing difficulties to collect the information. "It is quite smooth, even because other censuses took place years ago, which eases communication", told the 25-year old young man, who saw an opportunity to be inserted in the labor market with the Census of Agriculture. 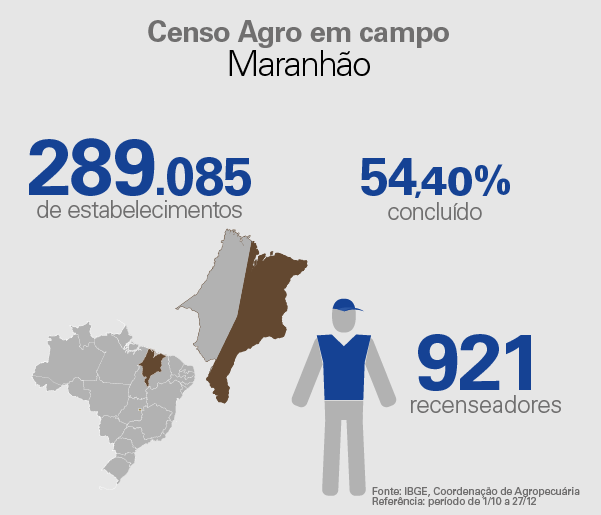