Paraná, our biggest producer of beans, takes part in the 2017 Census of Agriculture

Rural producer Felipe Kampa, age 33 has a diversified production in the 220 bushels (about 5.3 km²) of his property, located in the municipality of Porto Amazonas, 75km far from the capital, Curitiba. During the summer, he plants beans, corn and soybeans. In the winter, the area is used as pasture, for raising cattle and also for the production of wheat. The producer’s dedication and technical knowledge, helped by the agreeable climate at the place, have contributed to a good performance of crops, even of beans, seen as a high-risk one. “It is a very demanding crop regarding soil fertility, quality of seeds, handling of pests. It demands rain at certain times. Quality depends on several factors, in that case” says Felipe.

Paraná has led the production of beans in Brazil since 2006. With a short production cycle, about 90 days between planting and harvesting, the product is widely accepted in the market usually attractive to producers, who can obtain up to three crops of it a year. According to data from the latest Municipal Agricultural Survey, Paraná harvested 590 thousand metric tons of beans in 2016, a total 22.57% of the overall national output.

At Felipe's properties, two types of beans are produced: black beans and pinto beans, corresponding to 10% of the planted area. He has already answered the Census questionnaire and believes the data collected will help the city and the entire country change their view of the sector. “Agriculture has been modernized lately. Today we see robots driving tractors, doing all the work without any help, you can say. When you think of a farmer you no longer picture an old man in the field, with a hat on his head and carrying a hoe.”

A portrait of the Brazilian field

Knowing the profile of that new Brazilian producer from Paraná is one of the objectives of the Census of Agriculture. “The portrait we are going to make of agricultural activity needs to reflect the reality of the field” says Sinval Dias dos Santos, head of the IBGE State Branch in Paraná.

The data presented by the survey are of great interest to public authorities, to those who work in the field, to researchers and to entities working in agriculture, such as cooperatives, federations and rural unions.

“What is important in the Census of Agriculture is the renewed necessity of having information about our reality. How can we make projects, structure them, and think as a society if we don’t know ourselves?” asks Livaldo Gemin, secretary director of the Agricultural Federation of Paraná (FAEP).

In Paraná, the portrait of the rural sector in the state is being made by about 1,350 enumerators, the group of Adriele dos Santos. With a degree in Languages, shw was very insecure about this new job. She was afraid of making mistakes in the questionnaire, of not being welcome. Now, she even gets presents from producers, says people are hospitable and that the results are beyond her expectations. "The Census has been well accepted, people are answering it. Sometimes there is a problem, but things are going very well”, she says.

So far, a little more than 20% of the 372 thousand agricultural enterprises in Paraná have been enumerated.

Sinval considers that a very positive figure, since data collection has been damaged by heavy rainfall in the state, which ended up making access to rural areas extremely difficult. We have had many cars stuck in the mud. Anyway, the enumerators, supervisors and IBGE servants have been very determined, working hard to keep the schedule of data collection – that is very important, of course, but without losing quality. More important than our schedule is the quality of our work.” 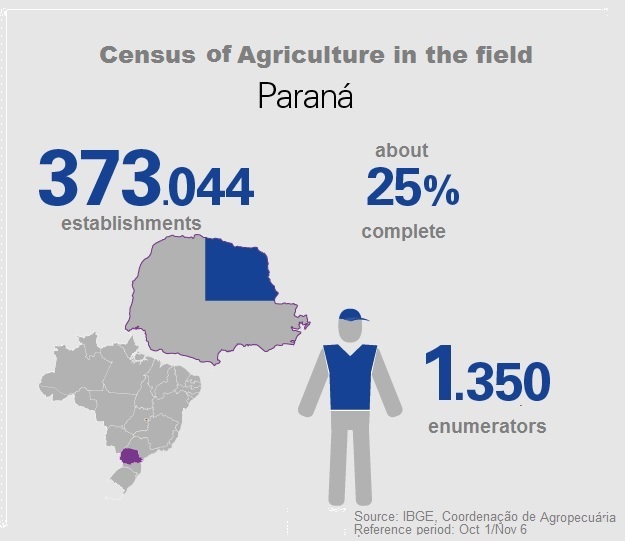