Piauí close to conclusion of the 2022 Census

As the 2022 Population Census approaches the end, Piauí is still the most advanced state in the survey. In November last year, the state finished the first step of data collection and now moves fast towards final figures. Reaching this objective demanded planning, geotechnology tools and a lot of effort from all the participants of the Census operation.

“The team was extremely dedicated. We are now refining the data, by means of tools developed by the IBGE itself, which guarantee more quality,” says Leonardo Passos, IBGE state superintendent.

This work is an attempt to enumerate housing units where residents were absent in the first visit by the enumerator, reverse refusals and check municipalities classified as vacant and for occasional use, besides verifying omissions, duplicity and even fraud. “That is, a careful work of quality control was done in order to guarantee the Census functions as it should, which is counting all the population in each one of the state municipalities,” Mr. Passos explains.

Besides bringing motivation to the team, real time monitoring of data collection was determining for the success of the mission. Many tools were developed by the IBGE for the supervision and quality control of the Census data collection. They allow real time control of the population already enumerated, the number of housing units visited, the population by sex, and so on.

“The IBGE also captured the location coordinates of all the housing units in the country, by means of the GPS installed in the data collection equipment, which allows, by means of the Interactive Geographic Platform (IGP), the observation of data collection, the percentage of coverage in terms of housing units, enumeration areas, from a spatial perspective, besides monitoring the route covered by the enumeration in the grid of enumeration areas. We also mention the possibility of checking coverage in comparison with addresses provided by the Brazilian Electricity Regulatory Agency (ANEEL),” says the superintendent.

The Census Operational Coordination in Piauí also made use of other support tools in order to help in data collection monitoring, among which a cartogram that shows the status of data collection in each one of the 224 municipalities in the state, by monitoring the evolution of the enumerated population.

“By means of the visualization of maps with contrasting colors it was possible to check which municipalities the data collection figures had not been increasing as expected. With this cartographic apparatus, we have had a very good notion of the municipalities that needed more attention, and then could send teams to improve collection in these locations,” says the operational coordinator of the Census in Piauí, Ranieri Leite.

He adds that the maps enabled the separation of the population according to specific levels of stratification. “For example, the population of vacant housing units, those for occasional use and interviews not conducted,” he explains.

Considering this work, sent to all Federation Units, the IBGE released, on December 28, 2022, the preview of the total population in municipalities based on data collected by the Census up to December 25. The results show, at that moment, that Brazil had 207,750,291 residents. But the counting work remains.

“The disclosure of the total population preview presents data which are more aligned with the populational reality in the municipalities of Piauí. That is certainly among the most relevant pieces of information for the state, because it reflects the efforts in the field in 2022, 12 years after the last Census edition.

The biggest municipal populations in Piauí were those of: Teresina, Parnaíba, Picos, Piripiri and Floriano. The smallest populations were those of Miguel Leão, Santo Antônio dos Milagres and São Miguel da Baixa Grande. 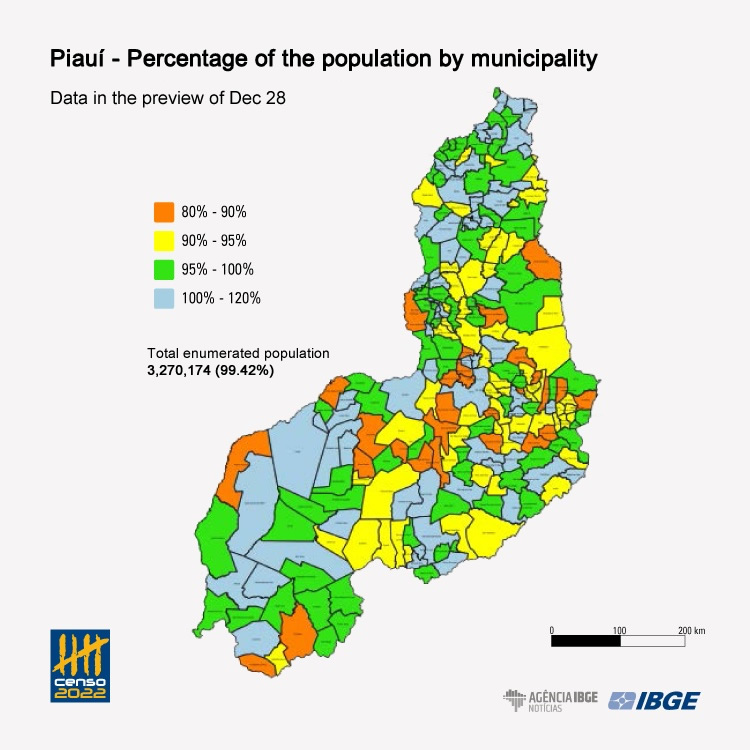 The 2022 Census also counts on the Post-Enumeration survey (PPE, Portuguese), whose main objective is to provide resources for the evaluation of coverage and quality of data collection in an independent way. According to state coordinator of the survey in Piauí, Tiago Nery, “the PPE has already visited 99% of the addresses selected for the survey sample in the state. A total of 28,415 housing units were visited, with a 52,369 persons surveyed.”

The team in charge of PPE is getting ready for the coming phases: matching and reconciliation, which follow the conclusion of the data collection and supervision steps.

A fundamental element for the construction of all the work was the dedication of the entire Census team, ranging from the field enumerators to the coordinators involved in the survey, all of them engaged in the search for quality. The state superintendent had a weekly meeting with the Census coordinators to discuss the status of collection and the solution to possible problems.

Another means of support to the Census in Piauí was the local press, always receptive to the weekly releases elaborated by the State Superintendence in order to inform the population about the relevance of the survey, and reinforcing the importance of receiving the enumerators. An evidence of this release is the low number of refusals, which was close to 1% in Piauí, below the national average, which was 2.6%.

A total of 2,600 enumerators were hired to work in the Census in Piauí, and they visited all the 7,122 enumeration areas in the 224 municipalities in the state. Other 241 Census Supervision Agents and 183 Municipal Census Agents were hired to help in the supervision of enumerators’ work. They were present in 183 Data Collection Units in all the state, located in 173 municipalities.

An unprecedented service in the history of Brazilian Census, Disk Census 137 started in Piauí. This public utility service was launched on November 30, soon after the first step of the Census. By calling 137, any citizen can get in touch with the IBGE and request a face-to-face visit by the enumerator in order to answer the questionnaire – in case the housing unit, for some reason, has not yet been enumerated.

The toll-free number 137 is available for persons whose housing units were closed at the enumerator’s first visit, as well as for those who had refused to give the IBGE information. One can call for free seven days of the week from 8 am to 9:30 pm.

“Call the Census in Piauí has received 203 phone calls so far, of which 62.56% have already been enumerated. Most contacts were from the capital, Teresina, which accounted for 47.8% of the calls,” says Amanda Júlia, operational census agent in charge of the service in the state.