In 2021, about 4.0% of the Brazilian homes had at least one resident who had been the victim of a theft in a period of one year. This percentage corresponds to 2.9 million housing units in the country and, among those with at least one victim, the majority of thefts (44.3% or 1.3 million) had taken place t home, whereas 39.5% of the persons had had goods stolen out of home. The data released today (7) by the IBGE come from the new module, Thefts and Robberies, of the Continuous National Household Sample Survey (Continuous PNAD), in a partnership with the Ministry of Justice and Public Security.

All over the country, in 2021, there were 342 thousand vehicle thefts, being 192 thousand car thefts and 150 thosand motorcycle thefts. In the same period, bicycle thefts amounted to 388 thousand. There were also 1.7 million home thefts and 1.4 million thefts of goods out of the housing unit. These two categories do not include criminal offenses in which vehicles and bycicles were stolen in robberies.

The IBGE analyst, Alessandra Scalioni emphasizes that Continuous PNAD figures may exceed the official ones, because not all persons who are robbed file a police report. “The occurrence of many more home thefts and thefts out of the housing units than of vehicle thefts may not be in accordance with reporting statistics because although people sometimes notice their goods are missing, they do not file a report at the police station.

The Southeast had the highest percentage share in the total thefts of all types. In 2021, it accounted for 55.3% of the vehicle thefts: of cars (64.1%) and of motorcycles (44.0%). The North Region had the highest percentage of housing units with victims of a theft (6.5%), way above the national average, whereas the Northeast had the lowest (3.3%).

Considering the most recent theft in the 12 months preceding the survey, the main place of occurrence of car thefts (75.1%) and motorcycle thefts (68.8%) were thoroughfares. As for bicycles, the main location was a housing unit (66.3%), either the victim’s or somebody else’s, followed by thoroughfares (21.9%).

Vehicle theft recorded the highest rates of reports to the police or municipal guard. Possible reasons for that are the high prices of these goods and the requirements to get insurance refund. In order to claim on the insurance due to car and motorcycle robbery, victms will need a police report. Therefore, in these cases most people seek help from the police,” the researcher explains.

That was true for 80.3% of the car thefts, considering the latest event in the 12 months preceding the survey. As for thefts taking place out of the housing unit, except in the case of cars, motorcycles or bicycles, the percentage was 44.8%. There were fewer reports to the police of municipal guard for bicycle thefts (28.5%).

The survey also tried to understand the reason why the victim had not sought help from the police. Among the most commomly mentioned reasons were “lack of proof” (24.1%), “not believing in the police” (23.6%), and “that was notb important” (22.0%). Being afraid of retaliation was mentioned in 6.7% of the cases.

Most of the victims seeking help from the police or the municipal guard filed a theft report. The proportion of reports was higher for cars (92.5%) or motorcycles (93.8%) than for bicycles (84.7%).

The types of items stolen were also investigated among cases in and out of the housing unit, that is, when cars, motorcycles and bicycles are not considered. When this type of crime took place in the housing units, the most commonly mentioned goods were: cell phone (21.6%), household appliances (20.6%), money (18.5%) and clothing or footwear (16.6%), followed by jewelry, costume jewelry of watches (9.8%), tools (8.1%), gas cylinder or other fuels (7.8%) and farm animals (5.7%). Guns and bullets were also mentioned (0.6%).

1.5 million housing units had at least one resident stolen in the latest one-year period

Besides thefts, the survey dealth with robberies taking place in the country in the 12 months prior to the interview. The two types of crime differ mainly because in robbery there is the use of violence or threat against the victim, with or without the use of a gun. In this specific topic, there are other indicators such as the use of guns and the identification of victims for each type of robbery. 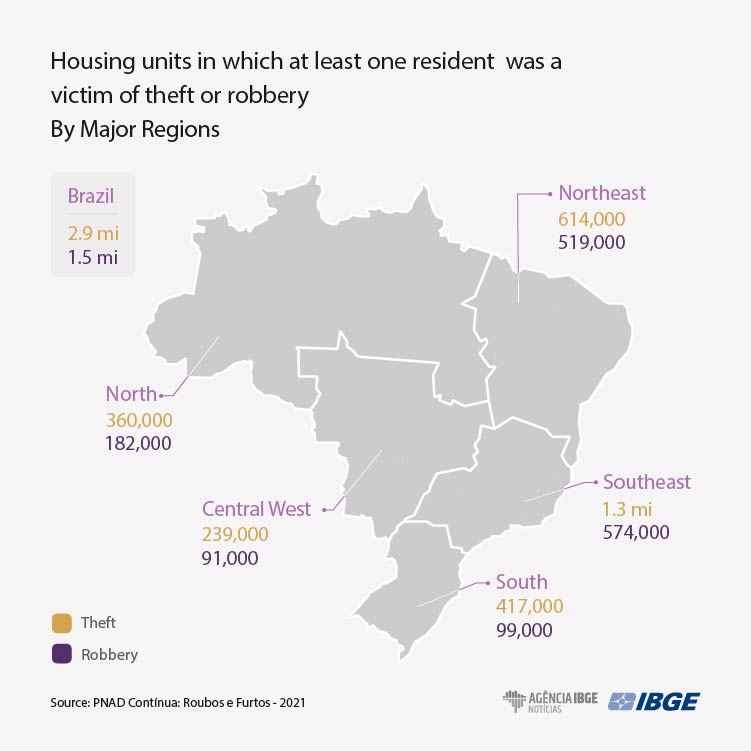 In 2021, the number of persons aged 15 and over who were victims of one of the five type of robbery investigated by the survey reached 1.8 million. That represents 1.1% of the total national population, with percentages above the average in the North (1.8%) and Northeast (1.4%).

Most of the thft victims had their goods stolen out of the housing unit (67.8%), whereas the proprotion of those victims of this type of violence at home were 23.0%. About 6.8% of the robbery victims reported car robberies; 5.6%, motorcycle robbery and 3.0%, bicycle robbery. The survey emphasizes that the same person can have been the victim of more than one type of robbery in the period of reference. 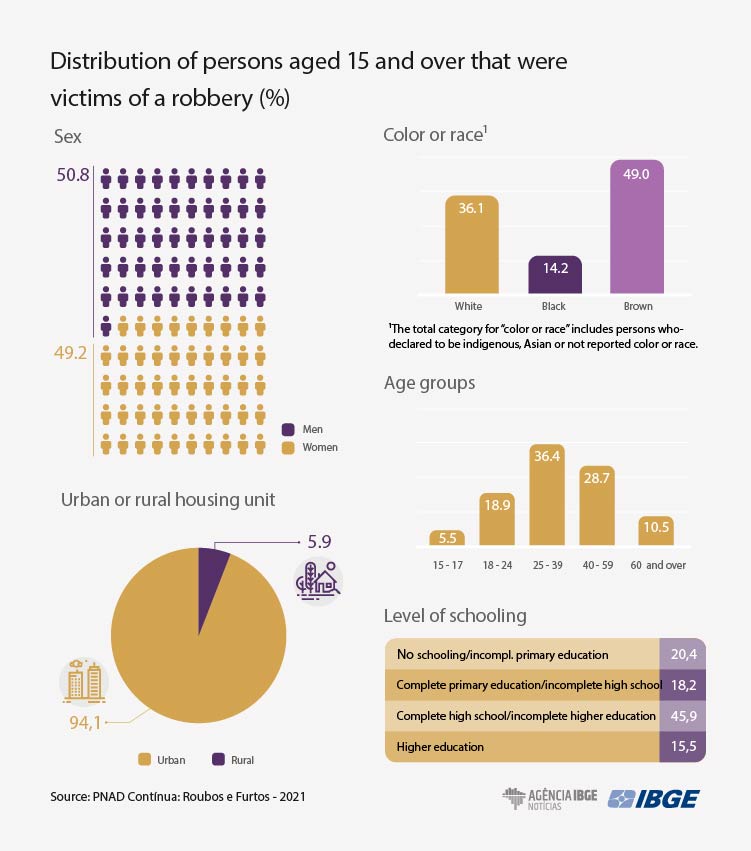 “The number of home thefts is expected to exceed that of home robberies because the latter has to do with violence, with victims present at home. It is much more difficult to break into a housing unit with someone inside than stealing things from an empty home.” In 2021, home thefts amounted to 1.7 million.

Differently from what occurred in the cases of theft, when the majority took place in the housing unit, bicycle robberies had as their main place of occurrence thoroughfares (70.2%). That was also the place that concentrated car robbery (72.2%) and motorcycle robbery (91.9%).

The rate of seeking help from the police or municipal guard for vehicle robbery (91.0% for cars and 82.5% for motorcycles) exccded the rate for other type of robbery. In the case of bicycle robbery, this proportion reached 52.4%. According to the survey, people would seek help from the police more often in cases of robbery than in cases of theft because of the context of violence taking place in this kind of crime.

Guns were the main types of weapon used in robberies

The rates of use of guns were above 60% in all the categories of robberies anallyzed. The proportion of use of this type of weapon surpassed 90% in car robberies (97.6%) and home robberies (90.8%) and was close to that in robberies out of the housing units (87.7%), a situation when the use of a knife or jacknife was mentioned in 13.9% dof the cases. More than one type of weapon may have been used in the same robbery. 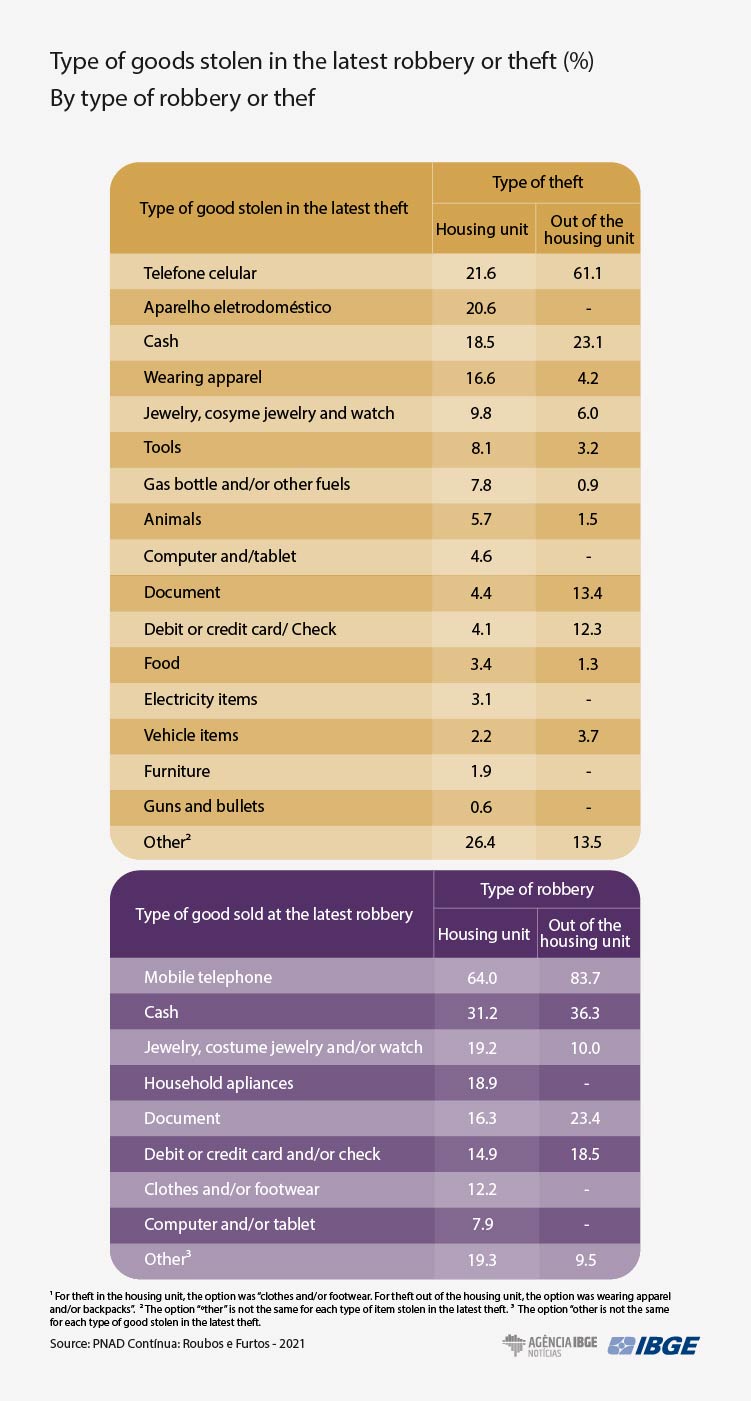 Continuous PNAD Thefts and Robberies, in partnership with the Ministry of Justice and Public Security, investigated the topic for the first time in 2021. Interviweing residents aged 15 and over, the survey structured its questionnaire on three parts: security devices for the housing units, thefts and robberies. The survey of this topic was important to estimate the obscure figures of the country, as a big number of crimes are not reported.