In 2021, 12.7 million youth in Brazil were neither stuyding nor working

The IBGE indicator encompasses, simultaneously, youth who were not studying and were unemployed (looking for a job and available to work) and those who were not studying and were out of the workforce, that is, who took no action to find a job or did not find available positions. This indicator is, therefore, a more strict measure of youth vulnerability than the unemployment rate, because it encompasses those who were not acquiring work experience or qualification, possibly damaging their future employment possibilities.

It is worth mentioning that the annual education module of Continuous PNAD did not go out in the field in 2020 and 2021. In this respect, the condition as a student that forms the indicator of this release does not include some aspects of youth qualification, such as attendance to high school technical courses, teaching qualification courses, prep school and professional qualification courses (for a specific occupation).

“In the first year of the pandemic, there was a decrease in the group of employed youth and the increase in the percentage of students who only studied did not compensate for that drop. Nevertheless, there was an increase in the number of youth not studying or working. In spite of the slight recovery observed in 2021, this continuous condition remains affecting more than 1/4 of the youth aged 15 to 29,” Betina Fresneda, IBGE analyst, explains. 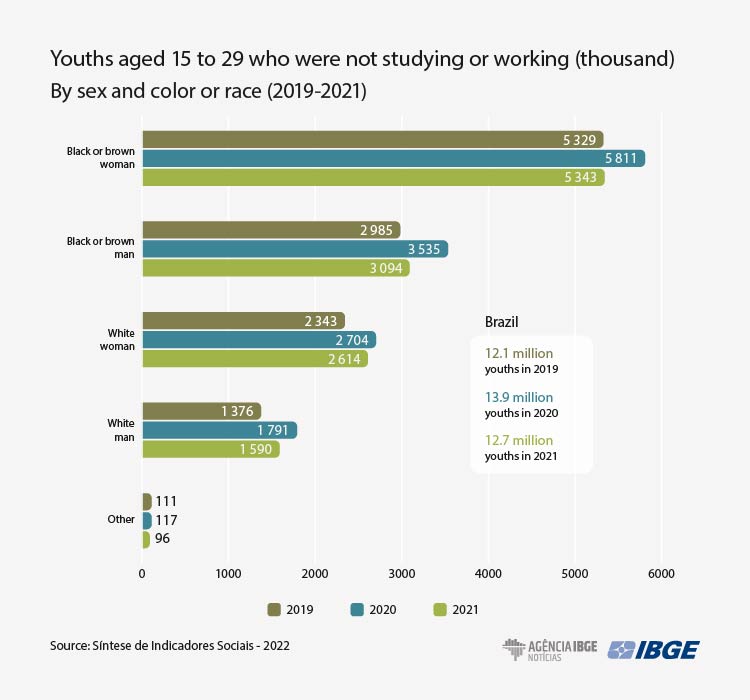 In the states of the North and Northeast (except Rondônia), the percentage of youth aged 15 to 29 who were not studying or working was above the national average (25.8%). The states in the South, Southeast and Central West (except Rio de Janeiro) were below the average.

Among OECD countries, Brazil had the third biggest percentage of youth who were not studying or working in 2020/strong>

These results differ from those released for most countries listed in the publication Education at a glance de 2021. Youth got to spend the first year of the pandemic only studying. Exceptions were found in some countries such as Brazil, Colombia, Canada and the United States, which recorded significant increases in the number of these youths. Besides, in comparison with all the OECD member countries and partners, only South Africa and Colombia had a percentage of young adults not studying or working above that of Brazil in 2020.

“In 2020, OECD countries succeeded in ease this unfavorable situation in the labor market, with some exceptions: Brazil, Colombia, Canada and the United States. For that reason, this year, which was the toughest in terms of labor market, not being studying or working, in the case of this group of young adults, became the most frewuent condition of these youths, more than 1/3 of this population,” Ms. Fresneda analyzes.

In 2021, employment population ratio increased, but it is still lower than in preceding years

“The employment population ratio fell against 2020, but remains below the figure in preceding years. Also, women’s employment fell more than in 2020 versus that of men and recovered more slowly in 2021, having expanded this difference between the sexes,” says João Hallak, manager of the survey.

In 2021, the white employed population earned more per hour tha blacks and browns, for whatever level of schooling. The diffrence was observed in the category Higher education, R$ 36.70 versus R$ 26.00, that is, 40.8% more. Considering the average total figure, the difference was 69.0% in favor of the white population. 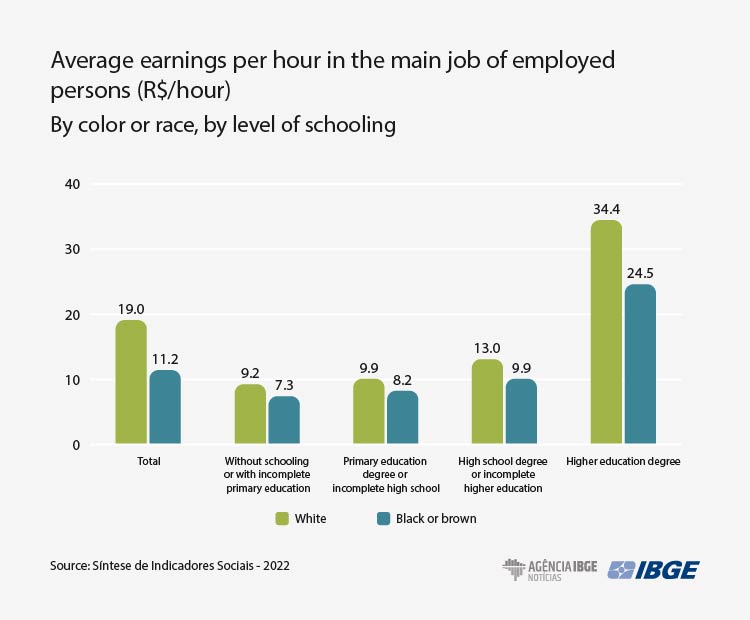 Underutilization rate reached the highest figure in the series in 2021

The compound underutilization rate encompasses three components: unemployment, time-related underemployment and potential workforce, which includes persons who were not employed, but had taken some effective action to find a job, but were not available to work or had not searched for work in spite of wanting and being available to work.

Therefore, the job crisis triggered by the start of the Covid-19 pandemic made even more serious the underutilization status of the Brazilian workforce. A taxa se revelou mais elevada para mulheres e para as pessoas de cor ou raça preta ou perda. In 2021, 35.4% of the women and 33.2% of the black and brown persons were underutilized.

“Between 2012 and 2014 there was a decrease in the underutilization rate, but, from 2015 on, following a labor market trend, it has been increasing, having grown by 10.2 percentage points up to 2021. In absolute figuress, a total of 19.4 million persons were underutilized in 2015 and 32.6.6 million in results observed in 2021,” says Denise Guichard, analyst of the survey.