In 2020, the Gross Domestic Product (GDP) of Brazil reached R$ 7.6 trillion, with a decrease of 3.3% in volume. Decreases in GDP were observed in 24 of the 27 Federation Units, stability in Mato Grosso and positive changes in Mato Grosso do Sul (0.2%) and Roraima (0.1%). These pieces of information come from the Regional Accounts 2020, produced by the IBGE in partnership with State Statistical Organizations, State Government Departments and the Superintendence of the Manaus Free Trade Zone (SUFRAMA).

In 12 Federation Units, the GDP rate was beçow the average in the country

In Rio Grande do Sul, agriculture was relevant to the result, due to the dry period of 2020, and to manufacturing industry, with contribution from the segment of preparation of leather.

All the five Major Regions recorded changes in GDP

In the Northeast, Maranhão (-1.9%) and Sergipe (-1.0%) were the only two states with a GDP change above that of Brazil. The performance of the area reached -4.1&, only second to that in the South Region.

The Central West recorded the lowest decrease in volume (-1.3%), influenced by Mato Grosso do Sul (0.2%), Mato Grosso, which remained stable and Goiás and the Federal District, which, after recording a decrease, of 1.3% and 2.6%; respectively, recorded a change in volume above the national average.

Eight Federation Units changed positions in the GDP participation ranking between 2019 and 2020. Throughout the time series, which started in 20002, only in 2014 and 2016, was there a biggest number of position changes. Paraná advanced from the fifth to the fourth position, due to the relative gain in national Agriculture, whereas, in Rio Grande do Sul, the loss of positions reflected the reduction of volume and in participation in the same activity.

Pará, due to the relative gain of Mining and quarrying industry advanced from the 11th to the 10th position in 2020, which had been previously been taken by Pernambuco.

Mato Grosso, which also sood out due to the performance of Agriculture, advanced to the 12th position, surpassinhg Ceará, which fell to the 13th position. Mato Grosso do Sul went one position upwards, to the 15th, whereas Amazonas fell to the 16th position, because the former had an increase in participation in GDP from 1.4% to 1.6%, whereas the latter remained with 1.5%, between 2019 and 2020.

“There was a lot of change in positions, more than in recent years. That is a result of the first year of the pandemic and of the way it occurre, in different ways among the Federation Units. Agriculture grew 4.2%, but represents about 5% of the national GDP, whereas in the states of the Central West it reached 20% of value added, which made up for the drop in services. Rio Grande do Sul was one of the few states where Agriculture did not represent a contribution, due to climate problems,” says the manager of IBGE Regional Accounts, Alessandra Poça. 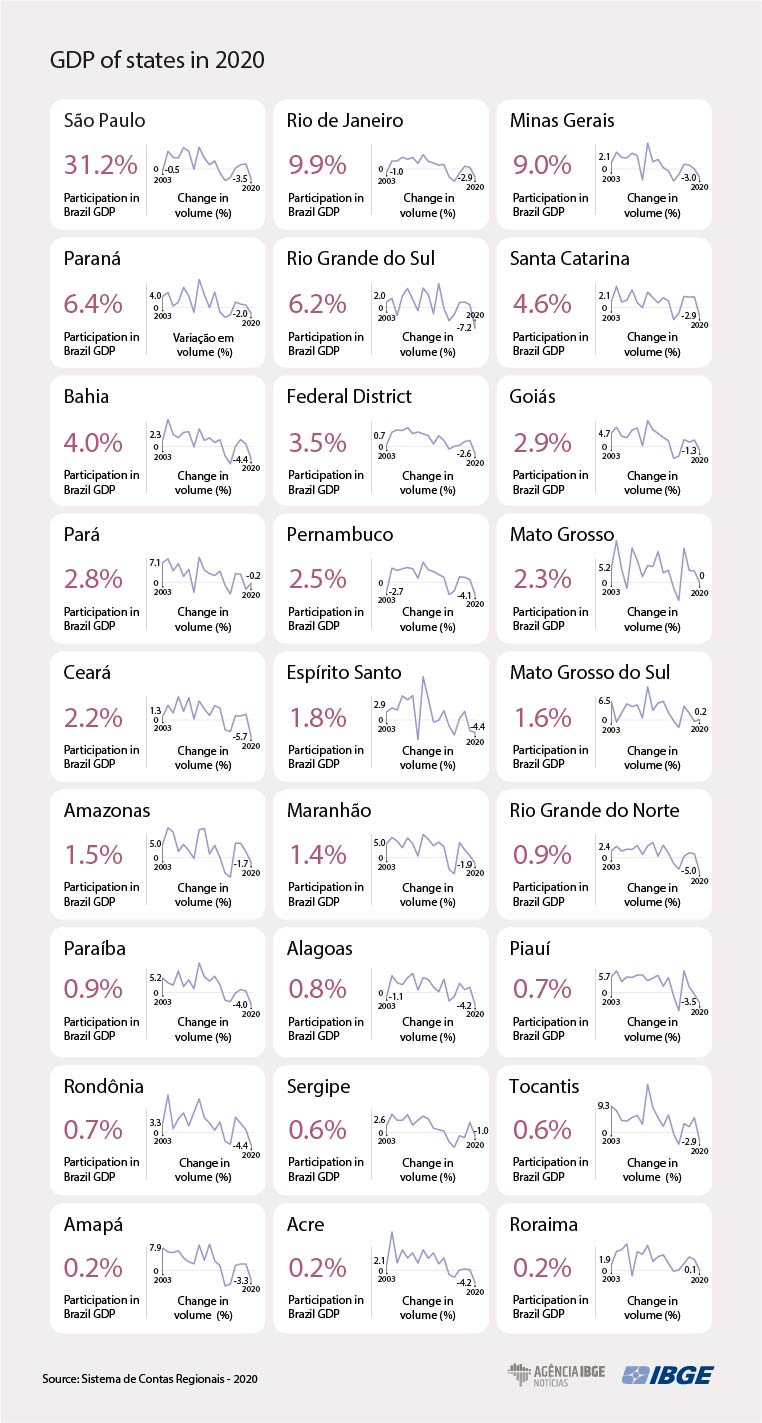 Southeast was the only Major Region to fall in participation, Central West and North advanced

“Participation is a combination of the change in volume and change in price. In 2020, we had super crops in Agriculture (except for Rio Grande do Sul) and an increase of the price of commodities such as soybean, corn, coffee and grain in a general way in agriculture, as well as the rise in the price of livestock products, as a contribution to the results of states that have a relevant agricultural production in their economies,” says the manager of Regional Accounts.

In the North Region, the relative gain was mainly influenced by Pará, with an increase of 0.4 p.p., due to the increase in volume and in the price of mining and quarrying industry, mainly iron ore. Rondônia and Tocantins also grew in participation.

In the Central West Region, Mato Grosso advanced 0.4 p. p, influenced by Agriculture, with an increase in production and in the prices of soybean and cereals. Mato Grosso do Sul and Goiás advanced 0.2 p.p. and 0.1 p.p., respectively, also grew in volume and recorded rise in Agriculture prices. In Goiás, other highlights were manufacturing industry, due to the production of food products and manufacture of alcohol. The Federal Distric lost 0.2 p. p., due to the performance of Financial and insurance activities and related services.

In the Southeast, the only Major Region with reduced participation in the period, Rio de Janeiro and São Paulo recorded a decrease of 0.7 p.p. and 0.6 p.p., respectively. In Rio de Janeiro, drop was influenced by Mining and quarrying industry, with fall of prices of oil and gas, whereas in São Paulo, due to losses in Financial and insurance activities and related services and in Lodging and feeding. Among the other states in this Major Region, Minas Gerais recorded an increase of 0.2 p.p. due to coffee crops, and Espírito Santo lost 0.1 p.p., also influenced by Mining and quarrying industry.

The Northeast Region kept its participation at 14.2% in relation to GDP in Brazil, but there was osclillatio in some of its states. Maranhão gained 0.1 p.p. with an increase in volume and in the price of soybena planting. Rio Grande do Norte and Pernambuco recorded decreases of 0.1 p.p. and 0.2 p.p., respectively, as a result of the performance of Mining and quarrying industry, in the former, and of Trade and repair of motor vehicles and of motorcycles, in the latter.

In the South Region, whose participation remained at 17.2%, there was relative increase in Paraná (0.1p.p.) and in Santa Catarina (0.2p.p.), and a decrease of 0.3p.p.in Rio Grande do Sul. In Paraná, the biggest influence came from agriculture, and in Santa Catarina, from Trade and repair of motor vehicles and of motorcycles. Rio Grande do Sul had significant relative loss associated with Agriculture.

Per capita GDP of the Federal District reached R$ 87 thousand, 2,4 times above the national figure

Only states in the Southeast, South and Central-West appeared among the 10 highest per capita GDPs in Brazil. In the Central West, the Federal District and Mato Grosso were the ones recording biggest decreases, between 2002 and 2020, with a change from the 11th to the 3rd poition. Mato Grosso do Sul went from the eighth to the fifth position in the ranking. Goiás, fell from the 10th position, in 2002, to the 11th one, in 2020.

RJ falls from the 3rd to the 6th position in the GDP per capita, being surpassed by MT, SC and MS

In the Southeast, besides São Paulo, which holds the second per capita GDP, Rio de Janeiro is in the sixth position, Espírito Santo, in the ninth, and Minas Gerais, in the tenth one, in 2020. Rio de Janeiro had been in the third position in the ranking between 2002 and 2019, and in 2020 it dropped three positions, being surpassed by Mato Grosso, Santa Catarina and Mato Grosso do Sul, due to the loss in participation in GDP.

In the North Region, Rondônia recorde the biggest position (12th), followed by Amazonas (13th) and Tocantins (14th). Rondônia and Tocantins increased in positions throughout the series, whereas Amazonas did the opposite, with a change from the ninth to the 13th position. In Roraima, Amapá and Acre dropped, whereas Pará went up six positions, from the 22nd to the 16th.

Among the states with lowest GDP per capita in 2020, Piauí and Maranhão were in the 26th and 27th positions, respectively. Below the 20th position in the ranking are - almost exclusively - northeastern states - with Acre as the only exception, in the 23rd position.

For the first time, worker’s compensation is no longer the main component of GDP from the perspective of demand.

The Northeast and the Central West were the Major Regions accounting for the reduction in participation of worker’s compensation, with nominal changes of 4.6% and 4.2%, respectively. As for the exceeding component plus mixed income, the North and Central West Regions were the ones contributing the most to the increase in aprticpation, with nominal changes of 24.0% and 18.1%, whereas the average chnage reached 8.8%.

In the Central West, the compensation of employees fell in participation in GDP (from 46.7%, in 2019 to 43.8%, in 2020) and, for the first time in the series, is no longer the main component in the Major Region, directly influenced by Mato Grosso, Mato Grosso do Sul and Goiás.

The North Region was the only one not reducing participation in the compensation of employees in Brazil’s GDP, due to the weight that the activity Administration, defense, education and public health and social security have in the Major Region (almost 25%).