Value of forestry production increases by 27.1% and hits a record R$30.1 billion

Wild crop harvesting advanced 31.5% and reached R$6.2 billion a value of production. Data come from the survey of Forestry Activities (PEVS) 2021, released today (29) by the IBGE.

“Forestry products increased significantly in value in 2021. That has to do with the rise of the dollar and to the resumption of industrial production. The most significant increase was that of value of forestry production (27.1%). Most of that (79.3%) comes from silviculture, or planted forests, whereas wild crop harvesting accounts for 20.7%,” says Carlos Alfredo Guedes, manager at the IBGE’s Agriculture department. 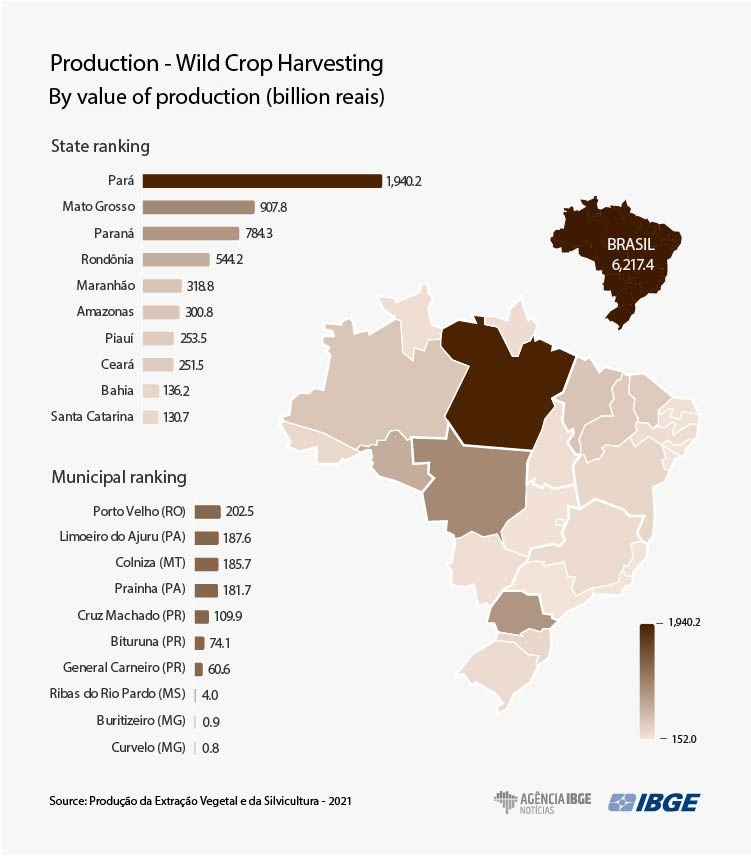 In 2021, areas with planted areas in the country dropped 1.4%, about 138.9 thousand hectares. The total silviculture area amounts to 9.5 million hectares, of which 7.3 million, or 76.9% are of eucalyptus, used in the pulp industry. Together, eucalyptus and pine tree were responsible for coverage of 96.0% of the areas with planted areas for commercial purposes in the country.

The Southeast was the only Major Region with increase in planted area of silviculture, in 2021, with an increase of 30.7 thousand hectares (0.9%). The South, which has 31.9% of the areas planted with pine tree and eucalyptus in the country, recorded a decrease of 2.7%.

According to data from the Secretariat of Foreign Trade (SECEX), of the Ministry of Economy, pulp was in the ninth position in the ranking of total exports in the country in 2021 (2.4%). Brazil is the main world exporter of pulp, with 16.2 million tonnes in 2021. 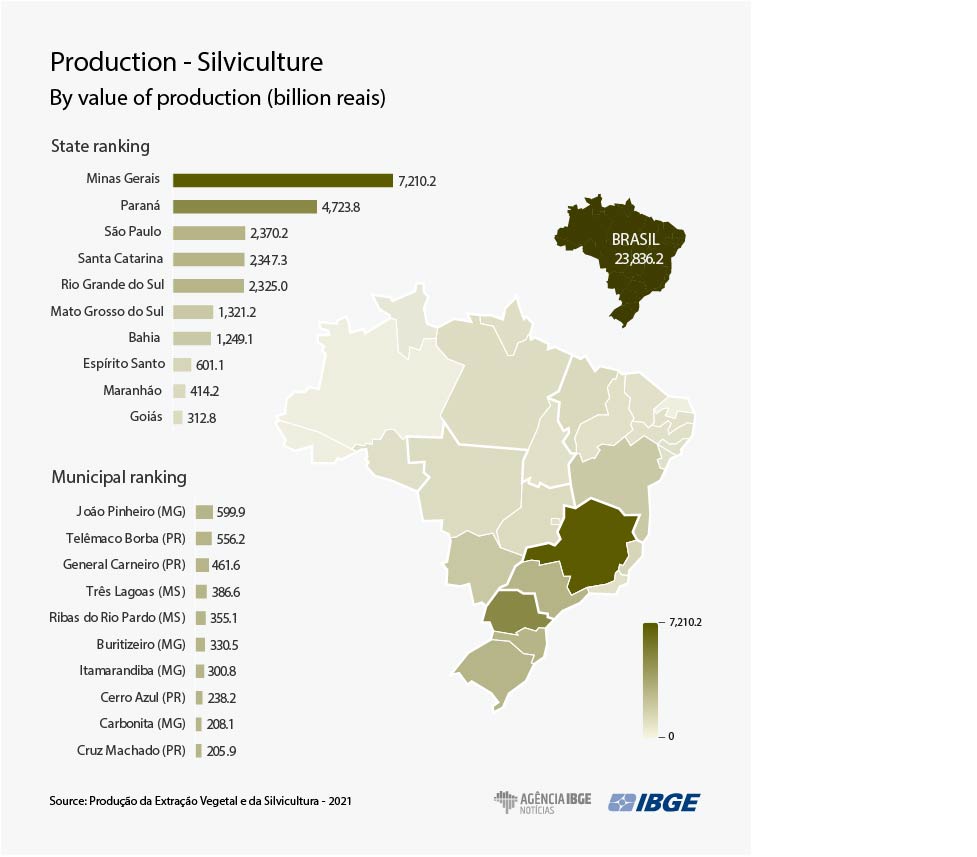 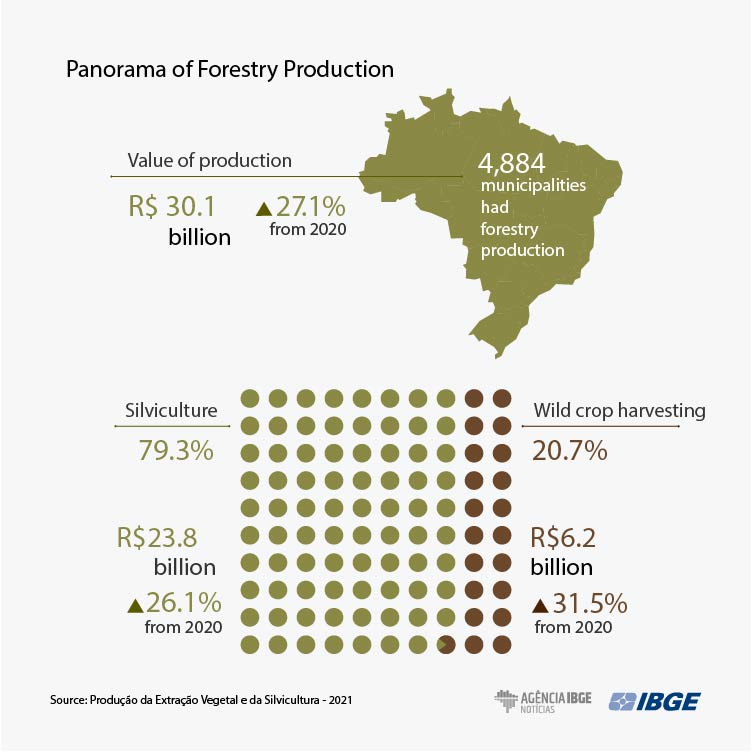 Minas Gerais still keeps the highest value of silviculture production, which increased by 22.5%, and reached R$7.2 billion in 2021, or 30.2% of the total of silviculture. The state is the main producer of charcoal, with 90.0% of the national total.

Paraná is in the second position in terms of planted forests, with R$4.7 billion. It is the biggest producer of logged wood for pulp and paper, being responsible for 17.6% of the national production. Production increased 4.1%, and amounted to 15.7 million cubic meters, and value of production increased 10.0%, having reached R$1.6 billion. Logged wood for other purposes also stood out, and totaled 22.0 million cubic meters, an increase of 1.0%, which represents 37.0% of the national overall, and the state remains as the main producer in the country.

Among the 10 municipalities with the biggest areas of planted forests in Brazil, five are in Mato Grosso do Sul, three in Minas Gerais, one in Rio Grande do Sul and one in Bahia. Four municipalities in Mato Grosso do Sul are on the leading position regarding planted area in Brazil, among which Três Lagoas and Ribas do Rio Pardo stand out. both have the biggest areas of planted forests, with 237.3 thousand hectares and 196.8 thousand hectares, respectively.

João Pinheiro (MG) is the municipality with the biggest planted area in the state, fully covered with eucalyptus. In Bahia, the highlight is Caravelas, whereas in Rio Grande do Sul, Encruzilhada do Sul, with areas divided into eucalyptus and pine trees.

João Pinheiro (MG) recorded the highest value of silviculture production in 2021, R$600 million, being number one in the national ranking. Telêmaco Borba (PR) followed with R$556.2 million, a highlight in firewood production, with 73.0 thousand cubic meters and generating R$3.5 million, with an increase of 331.6%.

“João Pinheiro (MG) was in the second position and surpassed Telêmaco Borba (PR) in terms of value of production. That results from the demand of steel industry for charcoal produced in João Pinheiro. Telêmaco Borga, stands out due to the production of logged wood for pulp and paper production,” Mr. Guedes says.

Among the 20 municipalities in the country with highest forestry production figures, 16 had a predominance of silviculture and the other four, of wild crop harvesting. Cruz Machado (PR), besides silviculture, had as a highlight the production of yerba mate, and Limoeiro do Ajuru (PA), besides wood harvesting, stood out for harvesting of acai berry. Colniza (MT) and Prainha (PA) stood out due to logged wood.

Wild crop harvesting increases by 31.5% and generates R$6.2 billion in value of production

Wood products, with the biggest participation in value of wild crop harvesting (63.5%), increased 37.9%, and reversed the trend of previous years, when wood harvesting fell in relevance and reversed the trend of the last few years, in which forestry exploration for wood was gradually replaced by production from planted forests. In 2021, many wood products recorded positive changes. Logged wood recorded an increase of 46.7% in value of production; firewood, of 10.0%; charcoal, of 30.3%. In terms of value of production, the group recorded an increase of 37.9%, and amounted to R$1.1 billion.

Mato Grosso and Pará accounted for 56.3% of the production of logged wood. Mato Grosso, which had surpassed Pará as the main producer in 2020, reached 4.5 million cubic meters, with an increase of 16.3%.

Maranhão is the main producer of charcoal, with 142.6 thousand tonnes, 32.3% of the national total, with value of production of R$ 152.7 million. In the year, production in Maranhão increased 38.2%.

Forestry encompasses 37 items, among which the highlights are: wood products, food products, waxes and oilseeds. In silviculture, seven products are investigated, including charcoal, firewood, logged wood and resin.