The IBGE released today (29) the National Digital Atlas of Brazil 2022, to celebrate the Bicentennial Anniversary of Brazil’s Independence. With updated geographic information on the national territory, the Atlas brings together maps, graphs, tables, photos and texts, thus expanding our capacity of understanding the ever-changing territorial reality of Brazil. By means of its Thematic Section, the Atlas attempts to move forward in the process of advancing in the geographic and statistical visibility of cultural diversity, by dealing with topics related to color or race and to traditional Peoples and Communities in Brazil.

Responsible for the dissemination of geographic knowledge of Brazil among the general public and students of all educational levels, the Atlas gathers information collected not only by the IBGE, but also by public institutions, becoming a strategic instrument for grasping the regional diversity of the country and for planning for the future. The project is structured around four major themes: Brazil in the world; Territory and environment; Society and economy; and Geographic networks. The global emergency generated by the Covid-19 pandemic is also addressed in several parts of the work, since it changed socioeconomic expectations that had an impact on the various themes of the book.

“The IBGE Atlas project, which dates back to the 1950s, improves knowledge of Brazil and reinforces the very formation of the national identity”, comments Adma Hamam, one of the project coordinators. “And the expansion of the thematic areas addressed in the 2022 edition demonstrates the evolution and complexity of our society in contemporary times”, adds the geographer. 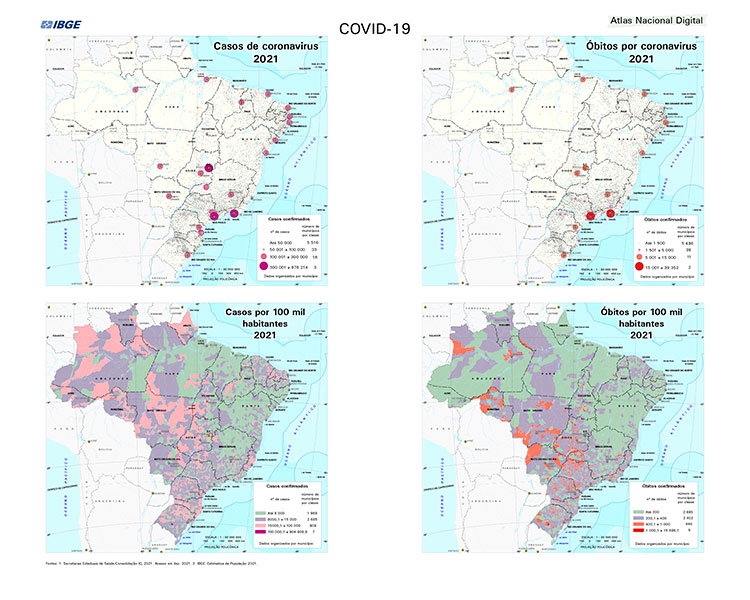 The first chapter of the National Digital Atlas of Brazil 2022 focus on Brazil inserted in the global scenario, addressing issues such as social inequality, access to information, geographic networks and energy sources. It emphasizes that the different forms Brazil is included in the world affect the country's own geography, since most of the activities developed here are also related to the world market.

The relationship between territory and environment is addressed in the second chapter, emphasizing that geographic space represents one of the foundations of the national identity, which makes its maps a central reference of this identity and its recognition in the world. It deals with political division, regionalization and the environment, with an emphasis on biodiversity and the geodiversity of the national territory. It presents the varied landscapes and natural resources, but also mentions the environmental processes that can generate risks, inherent to occupation of the territory.

“In this set, we highlight the earthquake maps, the maps of landslide susceptibility and of species threatened with extinction, which now, in addition to fauna, bring threatened flora”, comments Rosangela Botelho, geographer of the IBGE Coordination of Geography and Environment. 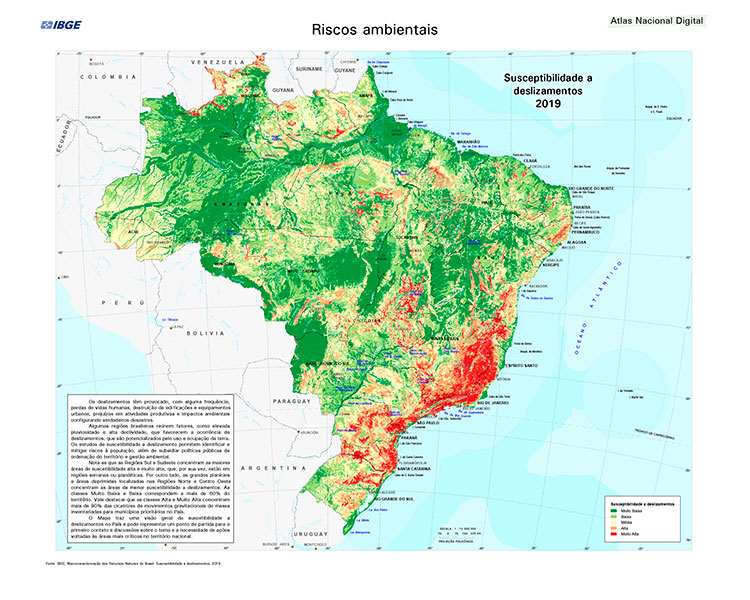 The theme Society and economy, in the third chapter, emphasizes that economic and social formation is a fundamental category for understanding space. It addresses geographic dynamics, regional inequalities, human rights, and economic space (demonstrating, for example, that soybean and corn crops advanced over the Amazon and Cerrado biomes in the past decade). He also tackles the pandemic, indicating that, in 2021, Brazil lost 607,270 people as a result of the coronavirus. And it reveals that, in that same year, among all states, the lowest number of deaths from Covid per 100,000 inhabitants occurred in Maranhão (103.40), according to data provided by the state health secretariats in 2021.

The last axis, Geographic networks, considers networks as central elements for understanding the dynamics and transformation of contemporary geographic space. It includes geodetic, cartographic, urban, road, energy, telephone, information and communication networks. Also in this chapter, data about Covid-19 appears, since the pandemic highlighted the huge difference in the Brazilians' travel time to get to an ICU. In general, the states of the Southeast and South have the shortest travel times, as well as the states of the eastern Northeast, that is, from Alagoas to Rio Grande do Norte. This pattern reasonably follows the demographic distribution, coinciding with areas of greater density, therefore, greater supply of hospital equipment.

The Thematic Sectiont that integrates the Atlas is in line with the IBGE's efforts to provide increasingly detailed official information on the various Traditional Peoples and Communities and segments of color or race present in the country. The section presents an unprecedented analysis of the socioeconomic profile and agricultural production of black, brown, Indigenous and wild-crop  harvesters, based on color or race data and on wild-crop harvesting of the 2017 Census of Agriculture. 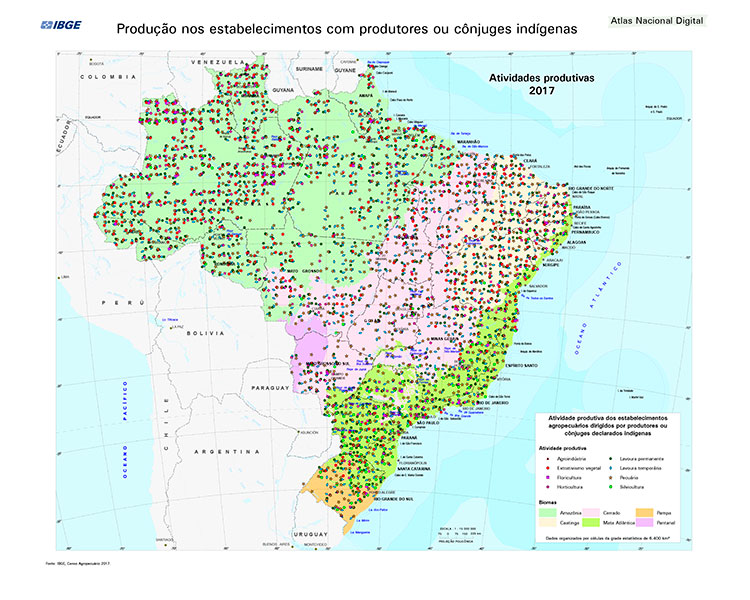 With the support of specific maps, an unprecedented location panorama of Indigenous production and producers was drawn, bringing data on spatial distribution, age distribution, characteristics of establishments, persons employed in production, access to technical guidance, energy, Internet, average value and destination of production, and access to funding.

For Daiane de Paula Ciriaco, IBGE geographer and also coordinator of the project, it is extremely important to give visibility to traditional peoples and communities. “The IBGE has been improving its tools for both data production and data analysis, working to refine, improve and include other traditional peoples and communities in the products we publish”, she emphasizes. According to Ms. Ciríaco, the inclusion of data from the 2017 Census of Agriculture in this work highlights the Institute's efforts in this matter.