Cattle herd increased for the third consecutive year and reached the record figure in the time series, according to the Municipal Livestock Survey (PPM), released today by the IBGE. The increase of 3.1% in comparison with 2020 caused the number of head to reach 224.6 million, having surpassed the previous record, of 2016 (218.2 million).

According to Mariana Oliveira, analyst of the survey, the year of 2021 was marked by the retention of female for the production of calves, as in 2020, opposite to the decrease in slaughter of cattle due to the lack of animals ready for slaughter.

The value of production of the main agricultural products reached R$91.4 billion. Milk production concentrated 74.5% of this amount, followed by production of hen eggs (23.9%). In the municipal ranking, the same list as in 2020: Santa Maria de Jetibá (ES) recorded the highest value of production, R$1.4 billion, of which 94.1% come from the sales of hen eggs, product of which the municipality leads the ranking. Bastos (SP) is in second place, with R$1.0 billion, 95.7% from the same activity as in the previous case. Castro (PR) is another municipality in the top 3. It is the main national producer of cow’s milk, with 97.3% of the value of production relative to this product (R$901.9).

Milk production was estimated at 35.3 billion liters in 2021, a figure that shows stability in comparison with the figure in 2020.

Among the Major Regions, the South regained its leading position, as in 2014 and 2018. Nevertheless, only the Northeast, third Major Region in the ranking, recorded an increase in production (12.8%) and reached 5.5 billion liters. Investments by this sector and better weather conditions observed in the last few years led to the increase of production for the fifth consecutive year, says the survey analyst.

Minas Gerais, despite the decrease of 0.8% in the annual comparison, remaied as the origin of the biggest production of milk, 27.2% or 9.6 billion liters. As for the 5,502 Brazilian municipalities that produced some milk, Castro remains (PR) remains as the leader, with 381.7 million liters, an increase of 4.9% in comparison with 2020.

Carambeí (PR) was in the second position, with 227.8 million liters. The third municipality was Patos de Minas (MG), with 206.0 million liters. It is worthy of mention that seven of the 10 main municipalities regarding milk production were located in Minas Gerais.

Raising of hogs and pigs increases and hits record figure; South has half of the national total 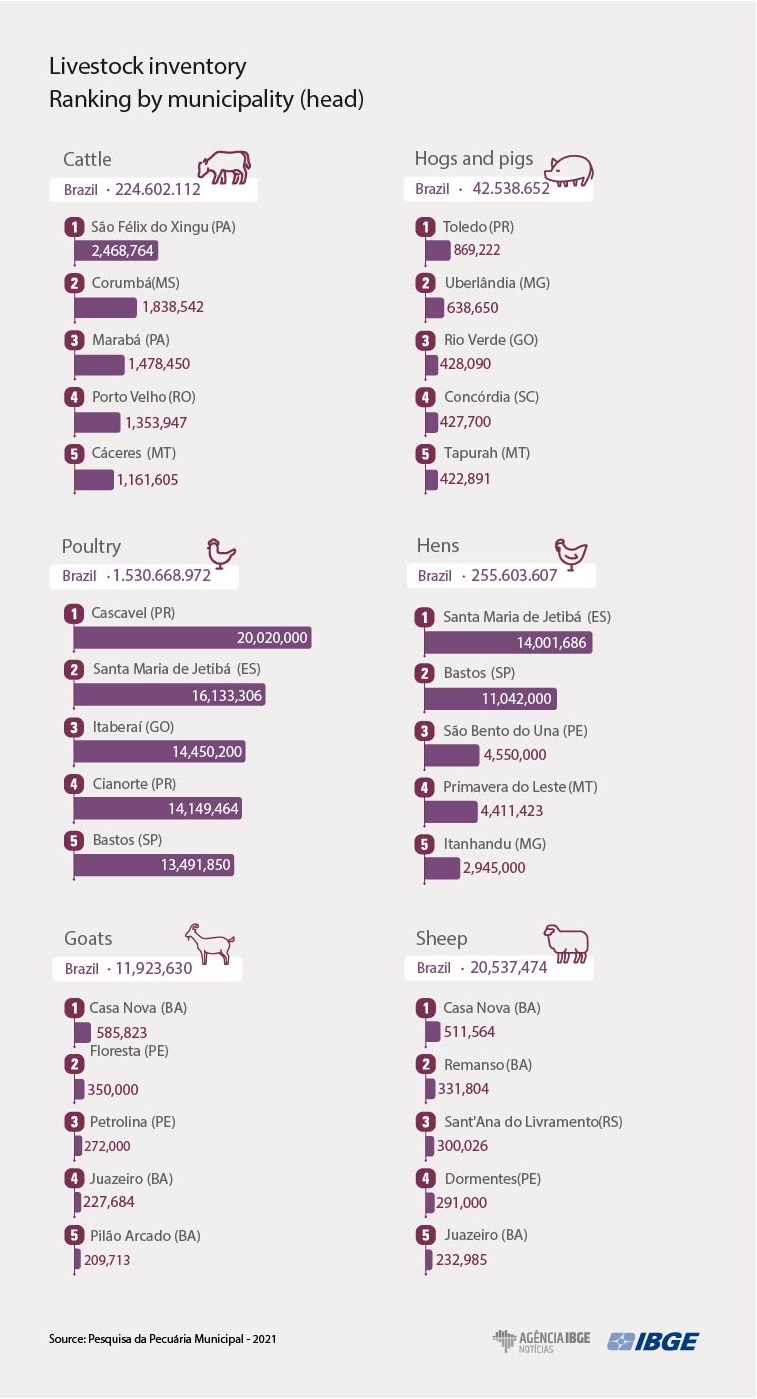 The South region is still the main one in terms of animal raising: 21.4 million animals, half of the national total. With 8.4 million head, an increase of 7.8%, Santa Catarina remains as the leader at state level, followed by Paraná and Rio Grande do Sul.

Among the municipalities, once more, Toledo (PR) had the biggest total, now followed by Uberlândia (MG) and Rio Verde (GO).

In 2021, the production of hen eggs increased by 1.7%, and hit 4.8 billion dozen, a record figure in 2020. Among the Major Regions, the Southeast is still the leader, despite the decrease of 4% in relation to the previous year. It accounts for 40.4% of the national total.

The Southeast has states in the first position (São Paulo, with 24%), the hird position (Minas Gerais, with 8.5%) and the fifth position (Espírito Santo, with 7.6%). Paraná, in the second position, with 9.4%, and Rio Grande do Sul, in the fourth position, with 7.9%, complete the top 5 Federation Units, which makes the South Region as second in the ranking: 22.9%.

Among the municipalities, the main five ones are: Santa Maria de Jetibá (ES), with 339.5 million dozen, followed by Bastos (SP), Primavera do Leste (MT) and São Bento do Una (PE) and Itanhandu (MG).

Cascavel (PR), for the first time, is number one in the ranking of 5,486 municipalities with the presence of poultry. This municipality recorded an increase of 17.8% in 2021, whereas the previous leader, Santa Maria de Jetibá (ES), fell to the second place. Itaberaí (GO) and Cianorte (PR) surpassed Bastos (SP), and complete the top 5.As for poultry production, Santa Maria de Jetibá (ES) is still the leader, followed by Bastos (SP), São Bento do Una (PE), Primavera do Leste (MT) and Itanhandu (MG). 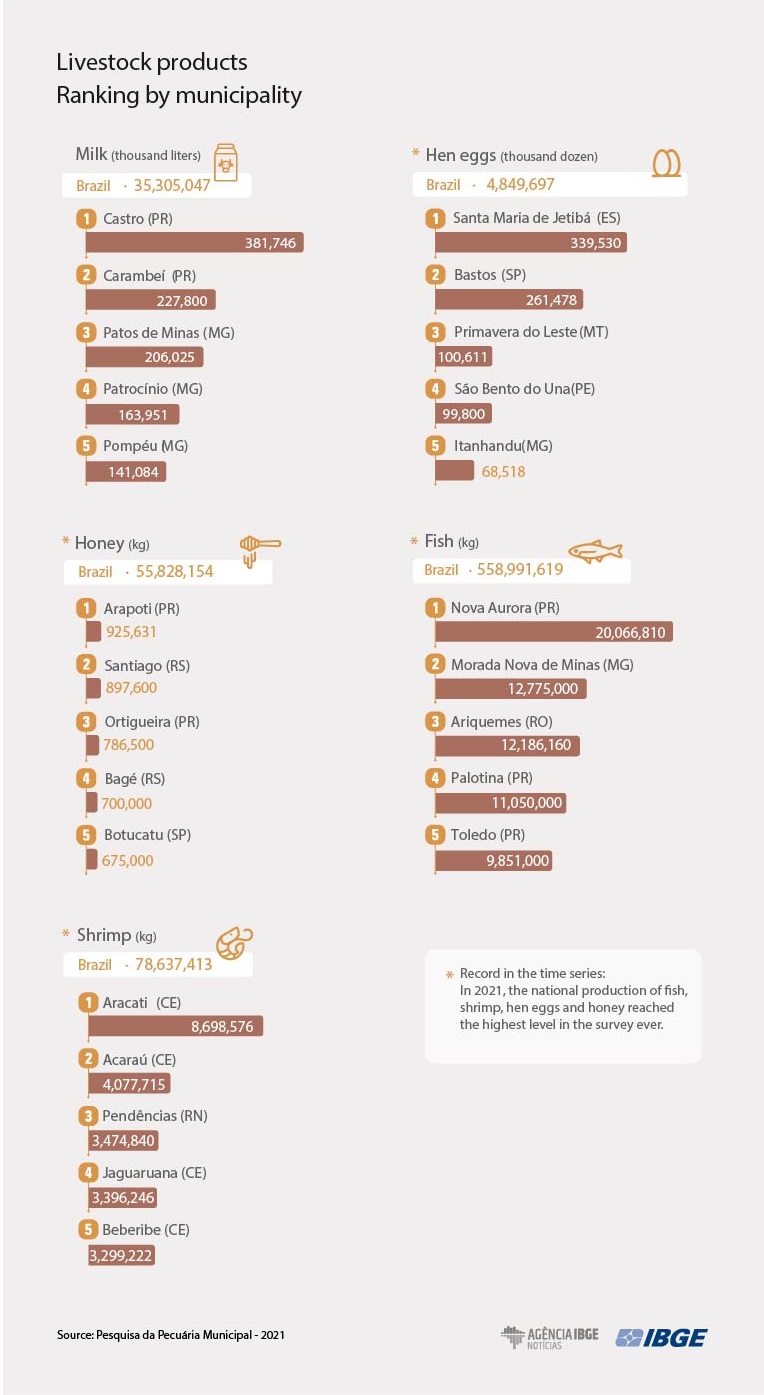 The national production of honey reached 55.8 thousand tonnes, an increase of 6.4% against 2020. The increase was mainly due to the increases in the South, Northeast and Southeast, with results of 39.7%, 36.3% and 18.8%, respectively. Value of production reached R$ 854.4 million, with an increase of 34.8%. The national average price of honey, per kilogram, changed from R$ 12.07 to R$ 15.30. “There is demand and room for increase of this market. A production potential can be explored, and that has been observed, with rise of the dollar and rise of prices," Ms. Oliveira explains.

Rio Grande do Sul is the main producer among Brazilian states, and accounts for 9.2 thousand tonnes, followed by Paraná (8.4 thousand) and Piauí (6.9 thousand). These states have led the ranking since 2017. Together, they represent 43.9% of the total Brazilian production.

Among the 3,991 municipalities that produced honey in 2021, Arapoti (PR) is in the first position, with an estimated production of 925.6 tonnes, followed by Santiago (RS), Ortigueira (PR), Bagé (RS) and Botucatu (SP).

Led by the South and the Central West, fish farming increases

Since the start of the time series, tilápia has been the number 1 among fish species. In 2021, tilapia production amounted to 361.3 thousand tonnes, or 64.6% of the national production of fish. The South Region was the main producer, with Paraná leading the state ranking for the species and, at national level, Nova Aurora (PR) does.

The second most produced species was tambaqui, with a decrease of 5.9%, and 94.6 thousand tonnes (16.9%) of the total fish farming production. This species is mainly concentrated in the North, with 71.6% of the national production. Together with the Northeast (22.6%), both represented 94.2% of the national total.

Rondônia leads the state ranking once more, and accounts for 36.7% of the total tambaqui production. Maranhão (12.1%) and Roraima (12.1%) are also important for production. The municipalities of Ariquemes (RO), Amajari (RO) and Almas (TO) form the top 3.

In the third position of fish farming is the group tambacu and tambatinga (7,7% of the total production), which recorded a decrease of 0.5%, from 2020 to 2021. Production is distributed among the Central West (58.6%), the Northeast (25.4%) and the North Region (14.7%), but it is mainly observed in Mato Grosso, which accounted for 54.8% of the national production of these two species. Maranhão also stands out, with a production of 21% of the total produced.

Shrimp farming reached 78.6 million kilos in 2021, a figure 18.1% higher than in 2020. Production, which is concentrated in the Northeast (99.7% of the total), has increased for the fourth consecutive time. “Every edition of the survey the sector proves to have overcome the crisis caused by the white spot syndrome virus,” says Mariana Oliveira.

Ceará is the main producer With an increase of 38.3% in production, the state has left Rio Grande do Norte (second-placed state) behind and reached 33.7 thousand tonnes or 42.9% of the national total.

Among the 192 producing municipalities, Aracati (CE) leads again, with 11.1% of the national production, now followed by Acaraú (CE) and Pendências (RN).