The Annual Survey of Services (PAS) 2020 added up to 1,368,885 enterprises, a drop of 1.1% over 2019, mainly due to the retraction of 14.3% in the segment of services rendered mainly to families. Those enterprises employed 12.5 million people, paying R$373.5 billion in wages, withdrawals and compensation. The data were released by the IBGE today (24). 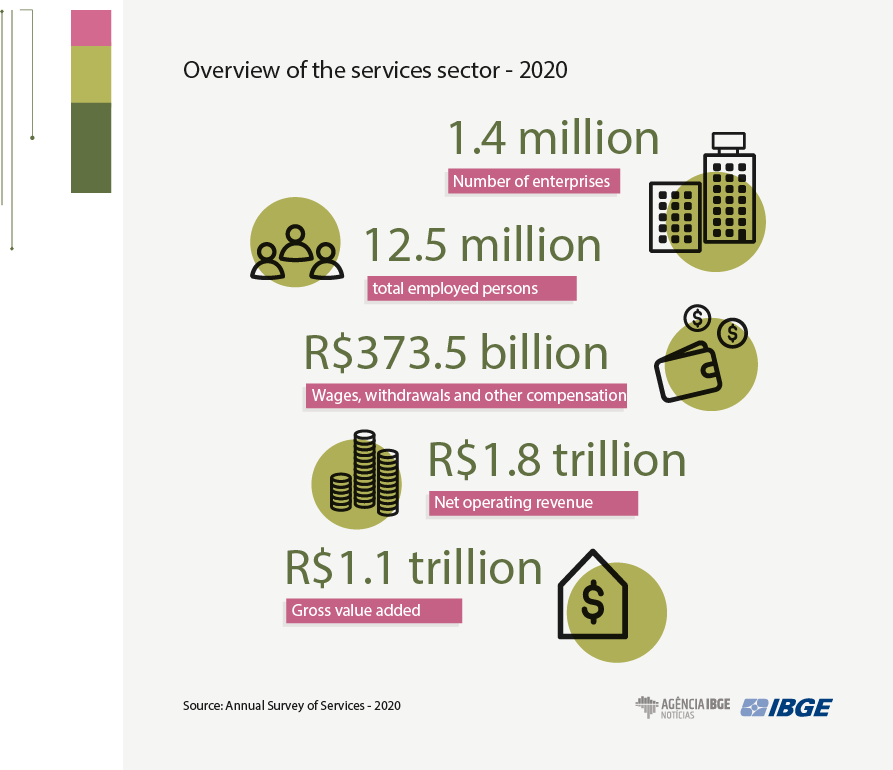 Professional, administrative and complementary services (504.5 thousand enterprises) and services rendered mainly to families (357.8 thousand) were the segments with the highest number of enterprises, jointly corresponding to 63.0% of the enterprises providing non-financial services in 2020.

In 2020, social distancing caused by the Covid-19 pandemic affected employment, development of enterprises and services provided face-to-face. Compared with 2019, while the GDP dropped 3.9%, the GDP of the services sector retreated 4.3%. 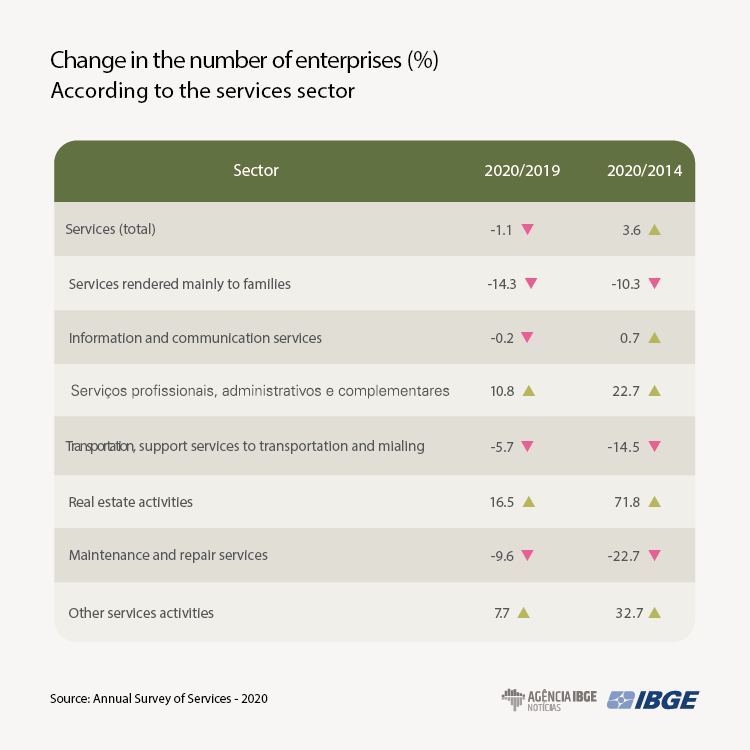 “The activities that depended on face-to-face services were the mostly affected by the pandemic, which increased the drop in employment started in the 2014 crisis. Except for professional, administrative and complementary services, real estate activities and other service activities, the other segments registered a drop in employment,” stated Marcelo Miranda, an analyst of the survey.

Having dropped 16.4% or less 467.9 thousand jobs, services rendered mainly to families was the most affected sector. Within that segment, the most intense negative influence came from food services: -18.7% or less 329.2 thousand employed persons. Travel agencies, tourism operators and other tourism activities also dropped (28.4%), as well as edition integrated with printing (21.2%).

Among the major rises, the highlight was recruitment, agencying and rental of workforce, which represents outsourcing, an option of many companies during the pandemic. “It was the biggest increase of persons in absolute numbers (143.1 thousand) and in percentage (22.2%),” analyzes Miranda.

“The size of the enterprises changed a little in ten years, changing from an average of ten to nine employed persons, except for professional, administrative and complementary services and other service activities, which dropped from 14 to 11 and from 13 to 10. Concerning salaries, all the segments dropped, except other service activities. The highlight is the segment of information and communication services, which pays the highest salary, though it also dropped,” states the PAS analyst.

The monthly average salary retreated, changing from 2.5 minimum wages (s.m.) in 2011 to 2.2 s.m. in 2020. Information and communication services (4.5 s.m.) remained with the highest compensation in average salaries, though it recorded the biggest reduction (1.0 s.m.). That result was influenced by the activity of telecommunications, which reduced 2.1 s.m. in ten years. 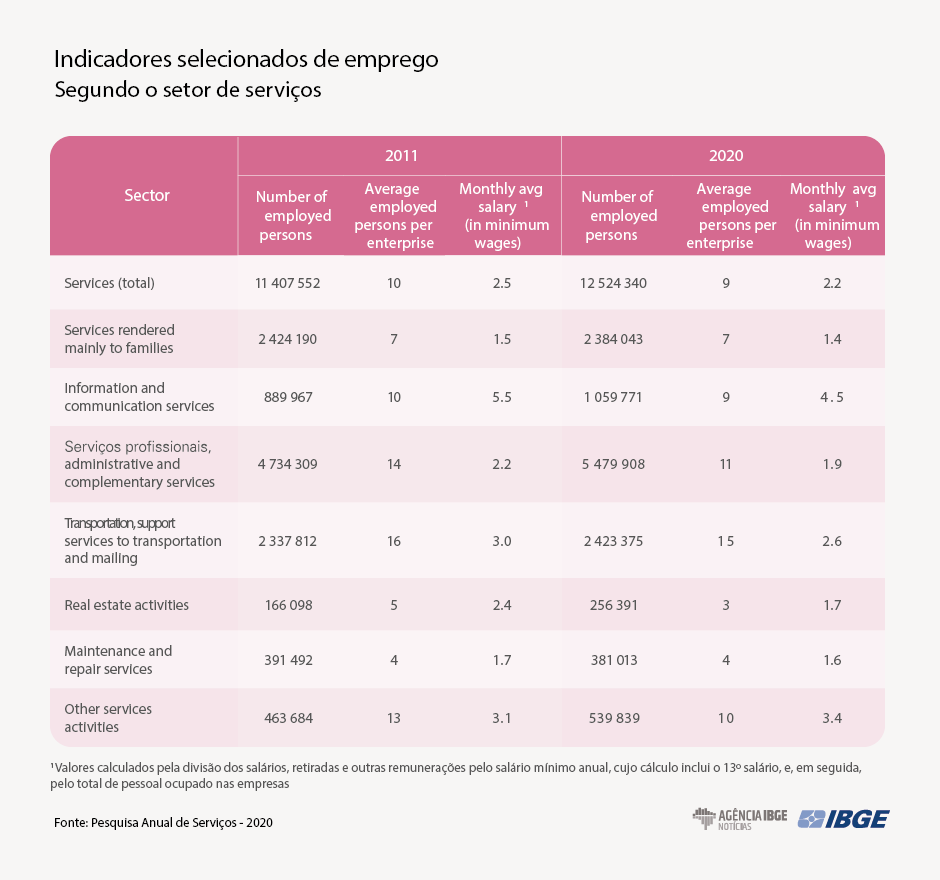 In ten years, South and Central-West increased their share in services revenue

All the regions recorded drops in the salaries, with the Southeast, North and Central-West showing the biggest losses: 0.3 s.m. The South and Northeast regions lost 0.2 s.m.

In 2020, the services sector produced R$1.8 trillion of net operating revenue. Between 2019 and 2020, the biggest increases in share in services revenue were professional, administrative and complementary services (1.7 p.p.) and other service activities (1.3 p.p.). On the other hand, the biggest drops were services rendered mainly to families (2.6 p.p.) and transportation, support services to transportation and mailing (1.0 p.p.).

The sector of professional, administrative and complementary services encompasses, for example, technical and professional services, law firms, accounting firms, recruitment and allocation of workforce and travel agencies. It was the third biggest segment up to 2011, it ranked in the second position in 2012 and, in 2020, surpassed the segment of transportation, support services to transportation and mailing, becoming the leader. “It is worth reminding that the sector of transportation suffered a lot during the pandemic,” explains Marcelo Miranda.