In 2021, per capita household earnings hit lowest level since 2012

“This result is explained by the drop in the average earnings from labor, which retracted even with the upturn of the employment- population ratio, as well as by the reduction in the income from other sources, except for those of rent,” explains Alessandra Scallion, an analyst of the survey, pointing out the change in the criteria of granting the emergency aid occurred in 2021 as one of the major causes of the drop in earnings from other sources. 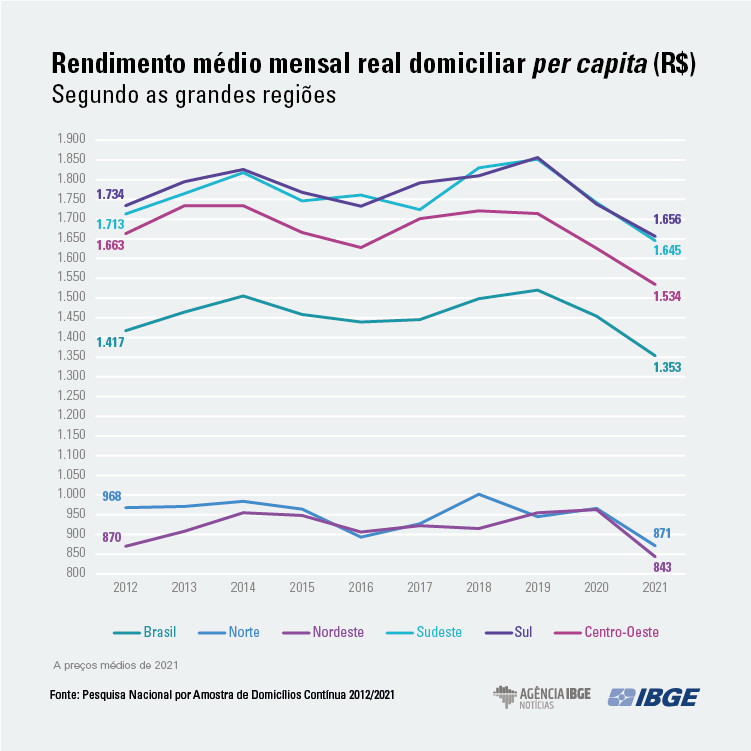 The percentage of persons with any earnings, of any kind, in the Brazilian population also dropped: from 61% to 59.8%, returning to the percentage of 2012, the lowest one in the time series. All the regions reduced, mainly the North Region. The South (64.8%) remains with the highest estimate, as occurred in all the years of the time series. The lowest ones are in the North (53.0%) and Northeast (56.3%) regions. That percentage increased in “All jobs” from 40.1% to 41.1%, which corroborates the increase in employment in Brazil. On the other hand, the percentage of persons with earnings under the section “Other sources” dropped from 28.3% to 24.8%. The highest change was in “Other earnings”, from 14.3% to 10.6%.

In the division of the participation of the household income among the earnings types, only the contribution of the item “Other earnings” fell from 2020 to 2021, reaching 4%. The income from “All jobs” reached 75.3%, whereas “Retirement and Pension” represented 18.2%, “Rent and Leasing” hit 1.7% and “Alimony, Donation and Monthly Allowance of non-residents” reached 0.9%. “An important increase was registered in Other earnings in the first year of the pandemic, 2020, due to the increase in the item “Other Social Programs”, where the emergency aid was included. The changes that occurred in the granting criteria and in the values of the aid in 2021 explain the reason why this type of income is losing importance. Less people is receiving it and the value also reduced,” explains the analyst.

The earnings module of the Continuous PNAD also unveiled that two types of earnings reached the lowest monthly average value in the time series in 2021: Retirement and Pension (R$1,959) and Other earnings (R$512). Therefore, the item “Other sources”, which also encompasses Rent and leasing (R$1,814) and Alimony, donations and monthly allowance of non-residents (R$667), registered an average of R$1,348, also hitting the lowest value in the time series.

Those drops explain why the overall index, which measures the monthly average income of the population with earnings considering all the sources, has also hit its lowest value in the time series: R$2,665

For the survey´s analyst, inflation helps to explain those drops. “The retirement values follow the adjustment of the minimum wage and most retired people earn such wage. As the adjustments are not offsetting inflation, that loss is natural,” states Scalioni. The item Other earnings is also explained by the changes in provisions and in values of the emergency aid.

Inequality grows, except for earnings from all jobs

Between 2020 and 2021, the inequality increased in all the regions, especially in the North and Northeast. Alessandra Scalioni explains: “They are regions in which the emergency aid reached a higher proportion of households during the COVID-19 pandemic and, thus, they might be more affected by the changes in the program occurred in 2021.” The Northeast Region remained as the highest Gini index in 2021 (0.556), whereas the South Region recorded the lowest one (0.462).

Concerning the monthly average earnings from all jobs only, the index changed negatively from 0.500 to 0.499. That result shows that the return of part of the employed population in 2021 reduced the average earnings and did not change the profile of the distribution of labor income in Brazil. When analyzing the stratification in classes of percentage of persons in ascending order of household earnings per person, i.e., from those who earn the less to those who earn the most, the survey shows that nearly half of the population with lower earnings received, on average, R$415, a drop of 15.1% in relation to 2020 (R$489), the lowest value in the time series.

In other words, those 1% of the Brazilian population with higher income earned 38.4 times more than the average 50% with lower compensation in 2021.