In an unprecedented survey by the IBGE, 2.9 million adults reported being homosexual or bisexual in 2019

Approximately 2.9 million persons reported being homosexual or bisexual, in the country, in 2019, which corresponded to 1.8% of the adult population, above 18 years of age. Other 1.7 million did not know their sexual orientation and 3.6 million did not want to answer. The data released today (25) by the IBGE, come from the National Survey of Health (PNS) – Sexual Orientation, which investigated, for the first time, on an experimental basis, this feature of the Brazilian population. 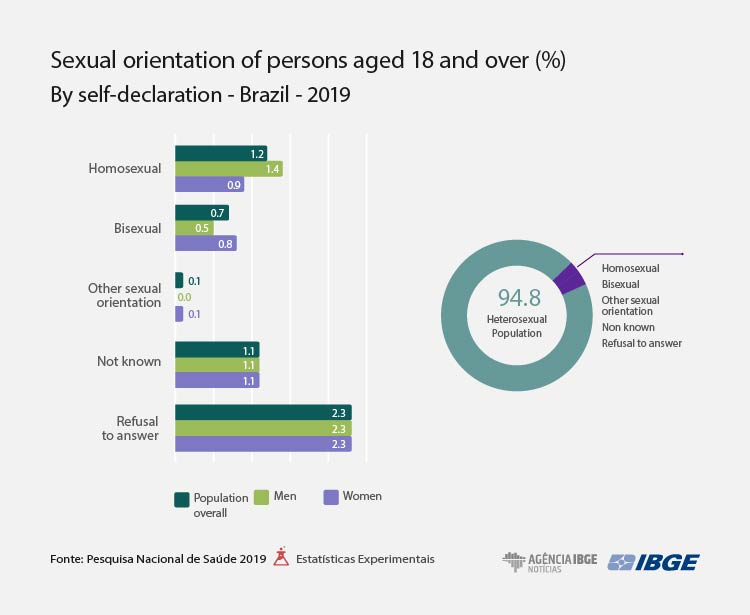 There were no statistically significant differences between whites (1.8%) and blacks or browns (1.9%) who reported being homosexual or bisexual. Among persons who live in urban areas (2.0%) this percentage was more than twice as those living in the rural area (0.8%) of municipalities.

3.6 million did not want to answer questions about their sexual orientation

The survey also highlights that 1.1% of the population aged 18 and over (or 1.7 million) reported not knowing their sexual orientation. Other 2.3% did not want to answer, which corresponds to 3.6 million persons, which exceeds the population that reported being homosexual or bisexual (2.9 million).

“The number of persons who did not want to answer maybe related to the interviwee’s fear of revealing their identity as homosexual ou bisexual and telling other people about their sexual orientation. Many factors can interfere with the verbalization of sexual orientation, such as the cultural context, living in small cities, one’s family context, feeling insecure to approach the topic with a stranger, being uncertain about how information will be used, not having defined one’s own sexual orientation, not understanding the terms homossexual and bisexual, among others," says the survey coordinator, Maria Lucia Vieira.

“The highest percentage of youngsters who did not know what to answer may be related to the fact these persons are still going through the process of defining their own sexuality. Similar results were obtained in surveys conducted in other countries, such as the United Kingdom, for example,” says Maria Lucia.

According to the survey, the percentage of persons who reported being homosexual or bisexual was bigger among the population with higher levels of schooling and income. Considering persons with a higher educaytion degree, 3.2% reported being homosexual or bisexual, a significantlt higher percentage than those without no schooling or who had incomplete primary education (0.5%). 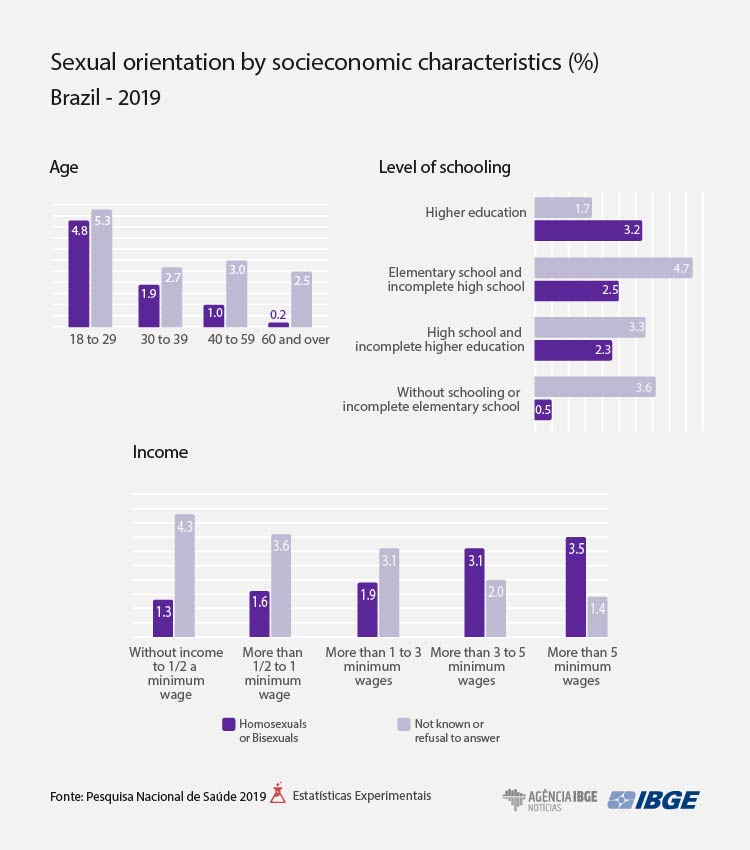 2.1 reported being homosexual or bisexual in the Southeast and 1.5%, in the Northeast

In the Southeast, 2.1% of the adult persons reported being homosexual and bisexual, 1.9% in the North and in the South, 1.7% in the Central West, and 1.5% in in the Northeast.

Among the Federation Units, the percentage of persons who reported being homosexual or bisexual reached 2.9% in the Federal District, 2.8% in Amapá and 2.3% in Rio de Janeiro, in São Paulo and in Amazonas.

The percentages obtained for the states and capitals should not be compared, because they are not considered significantly different from each other due to the confidence interval of these estimates.

That was the first time the IBGE collected data about the sexual orientation of the Brazilian population These pieces of information have been released on an experimental basis, because they have not yet reached a full level of maturity, harmaonization, coverage or methodology. So far, the only set of statistics about the LGBTQIA+ population refered to same-sex couples.

PNS surveyed people’s sexual orientation in a similar way as that in big household surveyes that conduct this type of survey around the world. The comparison of results shows that data from the PNS are in line with those generated by other countries. In the USA, for example, where data collection on sexual orientation is based on self-declaration has been conducted since 2013, the National Health Interview Survey (NHIS) showed that, in 2018, 3.2% of the Norrth American women and 2.7% of the men reported being homosexual or bisexual. In Brazil, PNS, the first experience related to the topic, showed that these percentages were 1.8% and 1.9%, respectively. 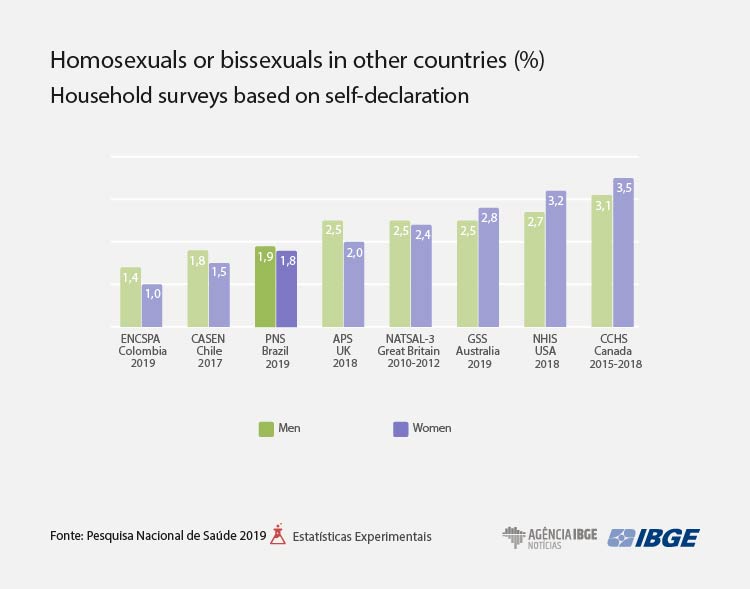 The data on sexual orientation were collected in 2019, in the 2019 PNS module that surveyed sexual activity, and which was targeted at residents aged 18 and over. Following the survey methodology, the informant was ramdomly selected, from the residents of a housing unit at the moment of the interview, to answer a question about their sexual orientation. They answered the question “What is your sexual orientation?” and were asked to choose from the following options: heterosexual;homosexual;bisexual; other; not known; will not answer.

Being aware that this is a sensitive topic, the IBGE attempted to guarantee, during the interview, some privacy for the informant to answer the question, even mentioning the option of having it answered on a Mobile Data Collection Device used by interviewers to register information.

“We have been so careful because we know there is a stigmatized view on lesbians, gays and bisexuals, and also the feat of discrimination and violence. That makes the informant afraid of speaking to another person about their sexual orientation, especially in small cities,”. Ms. Vieira observes.

Sexual orientation was collected by means of self-identification

As in other surveys all over the world, the PNS used self-identification to obtain information about people’s sexual orientation. No other dimensions of sex orientation, such as sexual attraction or behavior, were investigated. The survey coordinator explained that there are persons who feel attracted to others of the same sex, or that have sexual relationships with persons of the same sex, but who do not identify as homosexual or bisexual.

“The fact that a person identifies as heterosexual does not prevent them from being attracted to or having a sexual relationship with somenone of the same sex. To obtain information on the different ways of assessing sexual orientation, it is necessary to investigate sexual attraction and behavior, concepts that differ from self-identification, and which have not been covered by the PNS,” the coordinator explains.

PNS did not collect only data on gender identity, but the IBGE has been studying a methodology to include this topic in its surveys. “Collection of information on this characteristics of the population in household surveys requires a different approach and complementary surveys by the Institute,” says Ms. Vieira.

In the Census, informant answers questions in place of the other household residents

Questions about sexual orientation and gender identity were not included in the questionaires of the 2022 Population Census, because the methodology for obtaining information allows a resident to answer for themselves and for the other residents of the housing unit. “Because of the sensitive and private nature of this type of information, the question about the sexual orientation of a given resident, as well as other questions, must be answered,” the IBGE’s Director of Surveys, Cimar Azeredo, explains.

He highlights that the IBGE understands the importance of the topic and of being aware of society’s demand for these data. Therefore, it developed in the PNS, one of the main and most important health surveys in Brazil, a specific question about sexual orientation. The methodology of PNS makes possible the study of this type of information and also makes possible to combine it with other data from the survey such as violence, labor, mental health, lifestyles, etc.

“With this release, the IBGE intends to give a first contribution with estimates of the homosexual and bisexual population, and statistics at national level related to a sample proposal and representative of the different Major Regions of the country, although yet in a process of evaluation for improvements in future collections,” Mr. Azeredo added.

Data collection on sexual orientation by the PNS follows, to some extent, requirements of the National Policy of Full Health for the LGBT Population, effected by ordinance no. 2,836/2011, relative to actions in health promotion and surveillance for this population.

PNS has more than 20 thematic modules

The National Survey of Health (PNS), conducted in partnership with the Ministry of Health, visited more than 100 thousand housing units in the country, in 2019. It has more than 20 thematic modules related to the health of the population and to impacts on health services in the country. Its first edition was in 2013 and, in the second and latest edition, in 2019, new topic were introduced. See the previously released thematic modules here.