To assure the quality of the data collected, the IBGE organized, on April 27, the on-line seminar The Importance of Geographic Coordinates Collected in the Census, in which technicians guided the data collection teams on the correct ways to capture the coordinates, as well as clarified doubts. Mediated by Miriam da Silva Barbuda, assistant of the Directorate of Geosciences, the seminar was presented by Alex Santos, from the Coordination of Geodesy and Cartography, and Eduardo Baptista, from the Operational Coordination of Censuses (COC), and gathered more than 700 persons.

“The IBGE pioneered the capture of address coordinates in the 2007 Census of Agriculture - the first one to use data collection equipment - and in the 2010 Population Census. Only coordinates of rural areas were captured in these two operations, as well as in the 2017 Census of Agriculture. The 2022 Population Census will be the first time that the IBGE will also capture coordinates of urban households. To produce statistics, the benefit of having the geo-referenced information in the most detailed level is to aggregate data in several geographic divisions,” explained Cláudio Stenner, IBGE´s director of Geosciences.

For example, Stenner added that it will be feasible to better separate information of a river basin or of areas at risk of landslide and flooding, as in the project that is being carried out with the National Center for Monitoring and Early Warning of Natural Disasters (Cemaden).

He also highlighted that this initiative meets a recommendation of the United Nations Statistics Division, which has documents advocating the way in which geographic and statistical information should be integrated. One of the recommendations is to geo-reference the most detailed level as possible, including the coordinate of the addresses, thus allowing a number of statistical uses.

The coordinates are also important to improve the quality of the data collection, as it provides a wider vision of the coverage of the census operation in the territory. Therefore, it is possible to take actions to guarantee the total coverage, if needed. The capture of the coordinates will be in real time. It is also worth highlighting the caution with confidentiality.

“Under no hypothesis the IBGE unveils individual data of each household associated with the coordinate point. The coordinate aims at producing other aggregate statistics, but never to release any information associated with any one of them - name of residents, income, how many persons live in the household, etc. The society gains by having a better knowledge of the territory. According to criteria that respect the statistical confidentiality, we will define other rural and urban territorial divisions to release data that allow to pinpoint, for example, the population at school age far from schools, though not individualizing the informants,” stressed the director of Geosciences. 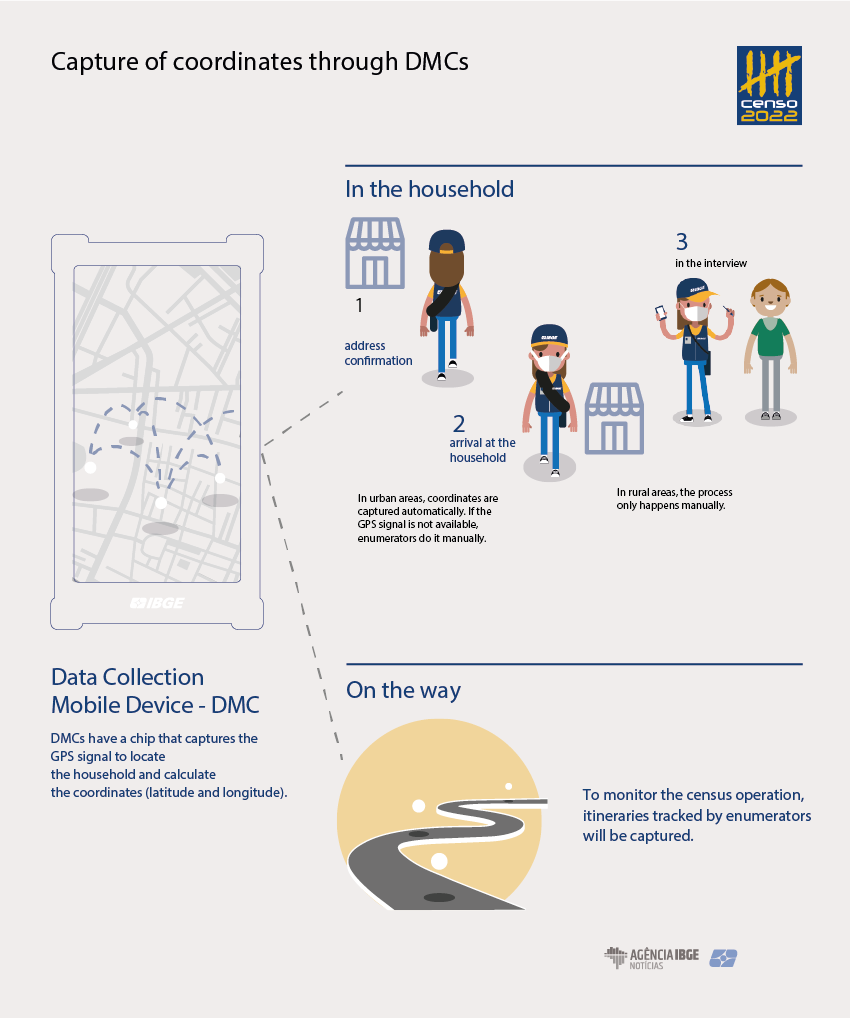 Capture of the coordinates of the itinerary of enumerators

In addition to the households, the coordinates of the itineraries covered by enumerators will be captured, which will also serve to monitor the census operation. If they do not cover a part of their work area (the enumeration area), the supervision teams know, in real time, how to assess and take measures to enumerate that area.

“After the data collection, we can map the ways in the territory, which helps to map the country, especially in the rural areas. The major gain with the capture of coordinates is to have, for the first time ever, the most exact localization of all the Brazilian households, which will allow to produce freer statistical data with geographic divisions for public policies of governments and decision taking on investments. Only the IBGE will have these data in Brazil,” signaled Stenner.

Wolney Cogoy de Menezes, coordinator of the National Address File for Statistical Purposes (CNEFE), notes that the capture of coordinates is useful both for the enumerators who are in the streets and for the teams that follow up the field work. For enumerators, the advantage is to see the precise localization at any time. Of course it is less critical in urban areas. In rural areas, however, to know where they are is very important for their work and safety, since they cover very remote areas. Menezes explained that an enumeration area should not be covered in a random way, since enumerators may miss interviews. Therefore, it is also important to capture itineraries.

“Tracking is basically a follow-up information for managers to know that enumerators are working neatly. They are guided to visit an enumeration area following a set of rules, like the way to cover a block. In addition, other professionals, the supervisors, also go to the field to do their jobs. In rural areas, tracking is an excellent indicator of itineraries where it is possible to walk,” says Menezes.

“It is usually more difficult to identify the boundaries between enumeration areas in rural areas, causing enumerators to carry out interviews in households out of their work areas, the so-called invasions. The capture of the coordinates also helps this. Whenever enumerators carry out an interview in a household out of their enumeration areas, the application warns them and their supervisors, solving the problem in time,” explains Menezes.

Inside the DMC, a chip captures the GPS (Global Positioning Satellite - a system that uses satellites to locate where the signal receiver is at that time) signal, calculates and returns the information of the coordinate, which is incorporated into the application and passes through several processes, like the comparison with the coordinates of the borders of the enumeration area. Having been registered in the DMC, the coordinate is sent to the central system in Rio de Janeiro together with the questionnaire at transmission time.

“So there is a long way until it reaches the National Address File for Statistical Purposes (CNEFE), a countrywide repository of addresses maintained by the IBGE. The coordinate is sent to a database that receives information in production; then it goes to the Census database, where a new CNEFE will be created. As we will update all the addresses in Brazil, the current CNEFE will be replaced by what enumerators collect. It is worth highlighting that the coordinate is associated with the address, and every treatment and use will always be anonymous concerning the residents. CNEFE has no other resident data and the questionnaire´s database has the enumeration area only,” clarified the CNEFE´s coordinator.

The coordinates will be also useful for other surveys, like the Continuous PNAD, as well as to update enumeration areas. The smaller city administrations can use the IBGE registers to improve their information.

“The IBGE will release the address files and some characteristics, like the type (whether it is a building, residence or store), which is public information available in other databases, like Google Street View. What makes our information valuable is that it is comprehensive, standardized and public. Until now, all the Census data were based on the enumeration area. By capturing the coordinates and respecting the statistical confidentiality, we will be free to establish areas to understand and unveil. For example, an area like the Atlântica Avenue (RJ) comprises several enumeration areas. With the coordinates, we can have a picture of the region,” summarized Menezes.

“This kind of granularity of geo-referencing is the dream of the administrative records. No other institution have geo-referenced the data that will be collected. Regardless of the technology, the IBGE already makes a revolution by covering the entire territory. When the IBGE carried out the Census of Agriculture in 2017, 21 thousand enumerators captured the coordinates, for the first time ever, using a GNSS (popularly known as GPS) system in the data collection mobile device enabled all the time. It allowed to map the itinerary of all enumerators. This was not the initial goal, but rather a later processing that produced a national map of side roads for the first time ever,” highlighted Marcelo Maranhão, IBGE´s coordinator of Geodesy and Cartography.

Maranhão added that, besides all the households, other installations of interest can have their coordinates collected. The major gain is that these data can be viewed and spatialized in maps. The IBGE is responsible for cartography in Brazil and these data will improve the cartographic bases of reference, as well as the environmental maps.

“This is the opportunity to access all the information in a survey of this size. Coordinates are a very rich data and it will improve the information that the IBGE provides to the society: municipal maps for statistical purposes, cartographic bases of reference and environmental mapping,” concludes the coordinator of Geodesy and Cartography.