Despite emergency benefits, 1 out of every 4 Brazilians were living in poverty in 2020

About 12 million persons lived in extreme poverty in Brazil in 2020, that is, on less than R$155 reais a month, and more than 50 million, 1 out of every 4 Brazilians were living in poverty, with less than R$450 per month. These data can be found in the Summary of Social Indicators, released today (03) by the IBGE.

The Institute used, in this analysis, parameters adopted by the World Bank of US$1.90 for extreme poverty and of US$ 5.50 for povert, in terms of Purchasing Power Parity ,at international prices of 2011, among other poverty thresholds used for differente purposes in the country.

“When we mention poverty, in this study, we mean monetary poverty, that is, due to an insufficient income, without considering other dimensions, such as access to adequate education, health and housing,” explains Barbara Cobo, IBGE analyst.

It is worth pointing out that this behavior varied significantly among the Major Regions. Considering the threshold of US$ 5.50, for example, the North and Northeast recorded decreases against 2019, whereas the South, Southeast and Central West were leveled off. Brazil’s performance was influenced by results in the North and Northeast,” Ms. Cobo adds.

For the first time, the IBGE assessed the impact of social programs on the incidence of poverty and extreme poverty in the country. In a hypothetical scenario without benefits paid, from 2012 to 2019, the proportion of persons living in such conditions would be at a level 2 to 3 percentage points higher, but the behavior of the indicator would be the same.

Nevertheless, in 2020, year affected by the coronavirus pandemic, the impact of granting of social programs is magnified: the difference of levels with and without benefits would be of 7.2 percentage points for extreme poverty and of 8.0 percentage points for poverty. Also, there would be a reversal in the behavior of the indicator in comparison with the previous year, and the proportion of persons living in extreme poverty and poverty would have increased instead of decreased. 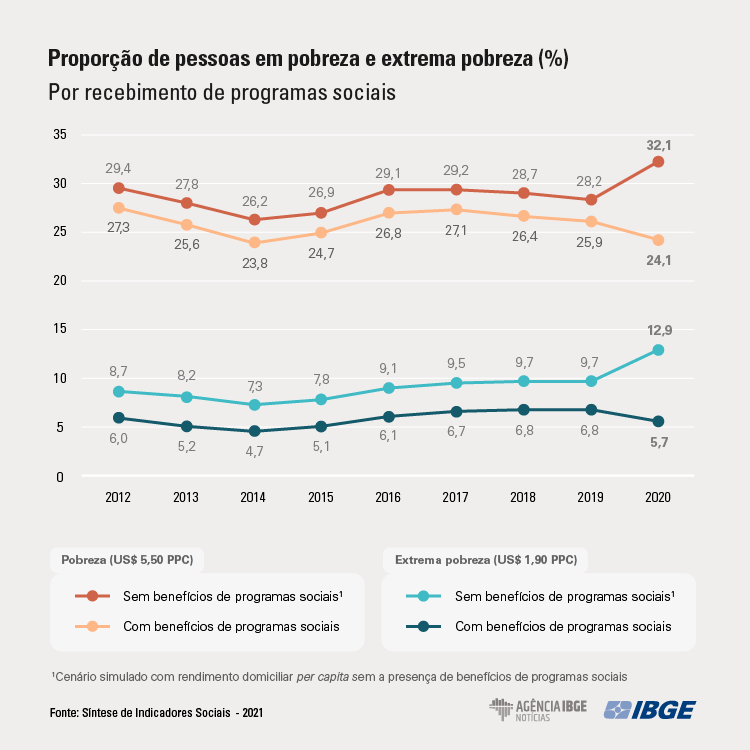 For Cobo, that shows that “indeed, emergency benefits were a way to reduce the severe impacts of the crisis on the vulnerable population, by including Bolsa-Família beneficiaries and expanding the target public for the program. The initial amount paid as Emergency Aid, R$600, for example, was three times higher that the average amount paid by Bolsa-Família right before the beginning of the pandemic and, because of that, the impact on household income was bigger.”

Women, blacks or browns and children aged up to 14 face highest extreme and extreme poverty rates

Also, families with a female head of households were black or brown, without a spouse and with children under 14 yearshad highest poverty levels: 17.3% of the residents of these arrangements had household income per capita below US$ 1.90 and 57.9%, below US$ 5.50 per day.

Granting of social programs in 2020 also prevented inequality to expand during the crisis: differences between the rates by color or race more than double when benefits are not paid, and black or brown women reacha level of poverty of 42.4%. 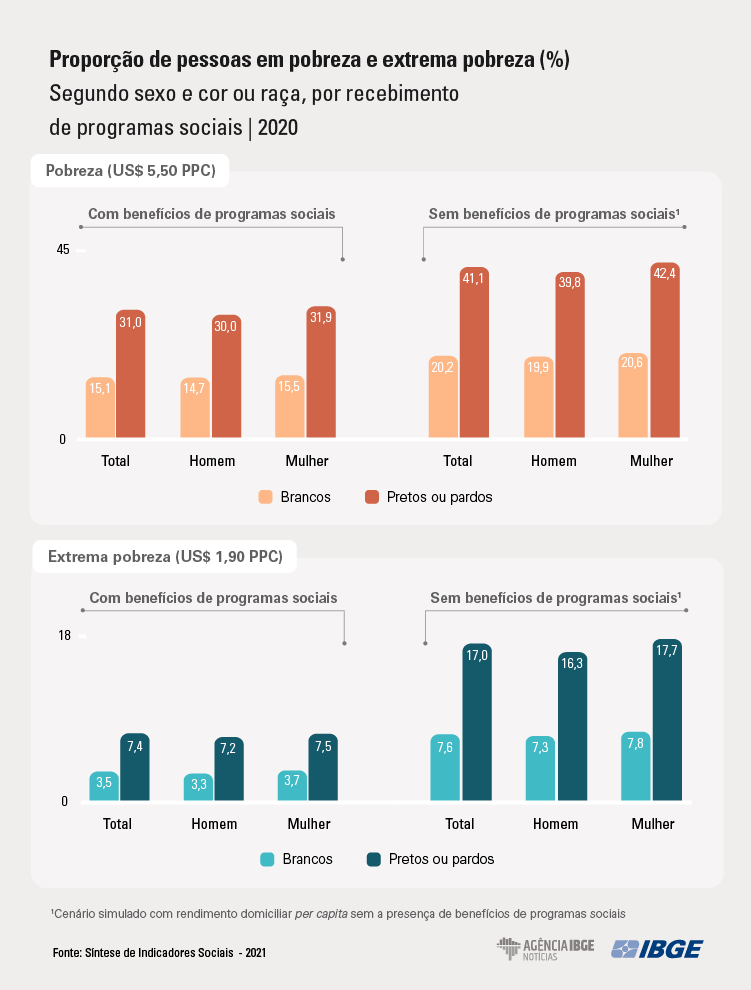 “The eligibility profile of the Emergency Aid encompasses the poorest population, who are more vulnerable and those doing informal work who are, historically, mostly black or brown. In this respect, by transfering more resources to black or brown persons, for example, it is possible to reduce inequality. Even considering the Aid, the incidence of extreme poverty and poverty among blacks or browns is more than two times that observed among white persons,” Ms. Cobo explains. 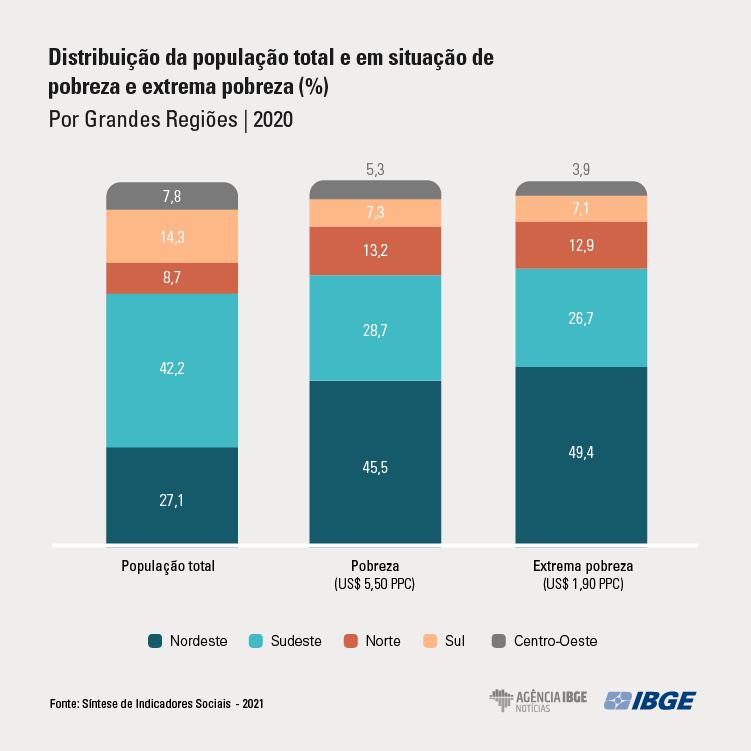 “Earnings in the North and Northeast are historically lower than those in the South and Southeast. Since the Emergency Aid is paid as a same amount nationwide, the impact on inocme tends to be more significant in these Major Regions. The highest levels of informality can be found in the former Major Regions, that is, more persons are benefited as well,” Ms. Cobe explains.