Last year, Covid-19 was the reported cause of death of 209.7 thousand deaths in the country, being 200.6 thousand deaths with informed color or race. Of that total, 101,9 thousand were white and 98.7 mil were black or brown. However, black and brown persons died more of the disease, in the first year the pandemic, than white persons. Among women, there was a bigger number of white victims.

Preliminary data come from the System of Information on Mortality (SIM), of the Ministry of Health, available in the Summary of Social Indicators (SIS), released today (3) by the IBGE.

At all ages, black or brown men were the main victims of Covid-19 (28.7% of the persons with a reported color or race), and in comparison with men (28.4%). On the other hand, among women, the white ones were the main victims (22.4%) in comparison with black or brown ones (20.4%). This difference between men and women by color or race was due to the under-representation of black or brown persons in the age group of 70 and over, due to the lower life expectancy of this social group and by the higher mortality caused by covid among the elderly.

In all the age groups from zero to 69, black or brown persons were the majority of victims of Covid-19 against white persons. Among persons aged 70 and over, that is reversed, the white population had a higher percentage of deaths than blacks or browns.

“The profile of the livimg persons pyramid aged 70 and over has a bigger concentration of women. The difference between men and women is related to one’s lifestyle. Although that has been changing, women are still more careful when it comes to taking care of their health than men. Throughout life, they are the ones to seek medical care, so that makes a difference in terms of reaching an older age,” says leonardo Athias, analyst of the survey.

In 2020, the elderly population, aged 60 and over, was the main fatal victim of the disease. Of the 200.6 thousand deaths by Covid-19 at an unknown age, 76.9% (154.4 thousand) were of persons in this age group. Among the elderly, men were the majority of victims as well. When the color or race of fatal victims, a bigger percentage was observed among white elderly persons (41.0%) than among blacks or browns (35.9%), also with a highlight to the under-representation of blacks or browns in this group.

“The change in the number of deaths is related to A variação do número de óbitos está relacionadathe individual lifestyle and to the living conditions of social groups. Blacks or browns have lower access to healthcare services and, therefore, fewer chances for prevention, diagnosis and treatment of diseases. Deaths caused by violence and accidents are bigger in this group, especially among men. All of that causes higher mortality among blacks or browns. Covid-19 reached the elderly population more often, formed mostly by white persons, but that did not prevent a majority of deaths among blacks or browns, which evidences the smaller access to treatment,” says the IBGE analyst. 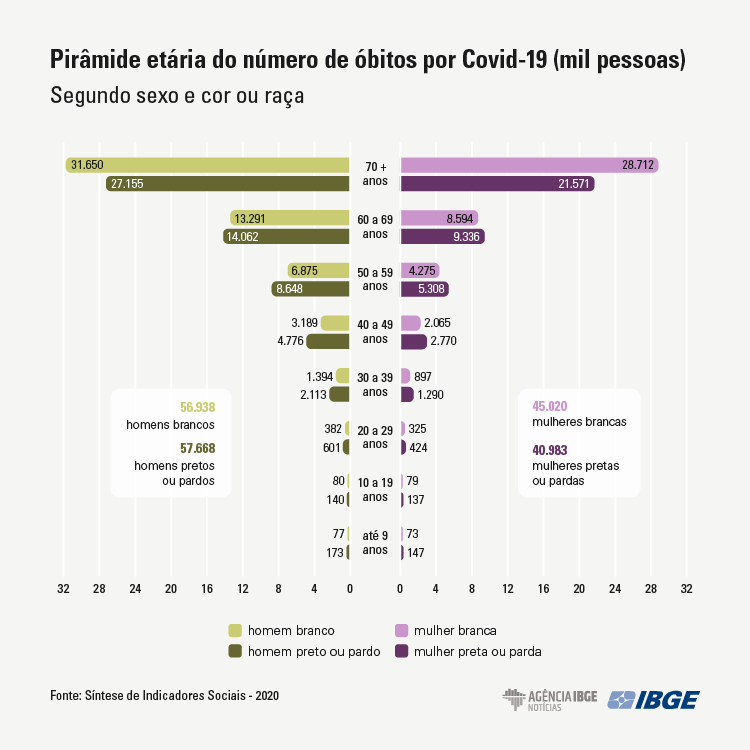 Number of deaths increased by 15.0% in the first year of the pandemic

The main causes of deaths in 2019 were due to diseases of the circulatory system (27.0%) and neoplasias (tumors), with 17.4% of the cases. In 2020, diseases of the circulatory system remained as the main cause of deaths in the country (22.8%), but the second position is now of infectious and parasitic diseases, with 17% of the total deaths, a chapter in the International Classification of Diseases and Health-Related Problems (CID-10) which lists the infection due to .the coronavirus. In the previous year, only 4.2% of the deaths were related to infectious and parasitic diseases. 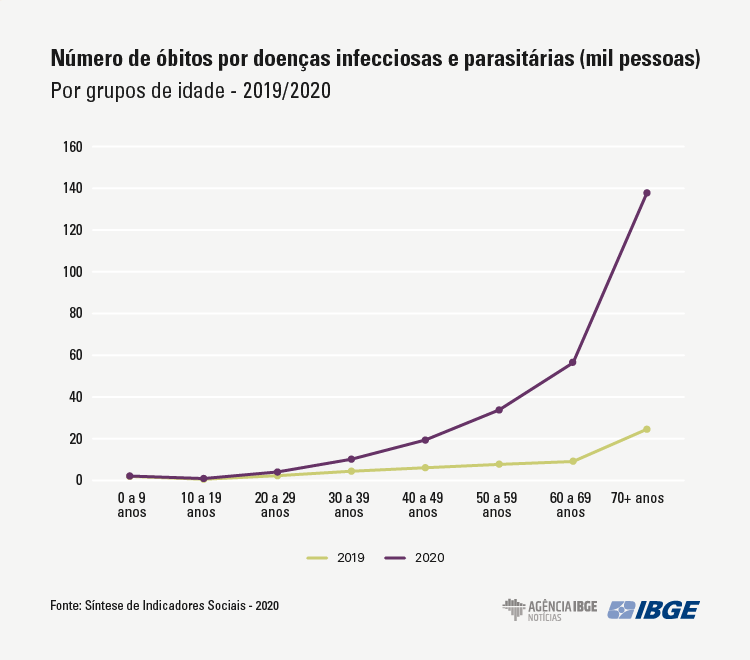 The analysis of causes of deaths by age groups shows that external causes (assault and violence) were the main ones among persons aged up to 49 years of age, being equivalent, in 2020, to 94.6 thousand deaths.

Between 50 and 69 years of age, the main causes were neoplasias (tumors), 95.0 thousand, and diseases of the circulatory diseases (such as heart attack and CVA), 109 thousand.

From the age of 70 on, deaths caused by diseases of the respiratory system were the mostly observed ones (101.6 thousand). The evolution of infectious and parasitic diseases was significant in the comparison between 2019 and 2020, because it also includes infection caused by the coronavirus.

The causes of death allow us to indicate risks and the most frequent health problems and the effectiveness of prevention actions of diesease complications. Considering these data, it is possible to reduce differences in the distribution of occurrence of deaths in the territory and among social groups, in such a way that public policies can lead vulnerable groups towards heathcare patterns reached by other groups,” Leonardo Athias concludes.