Sanitation atlas spatializes data on the environment and health

Despite the advance in the control of Diseases Related to Poor Environmental Sanitation (DRSAI), they were responsible for about 0.9% of all the deaths occurred in Brazil between 2008 and 2019. Among the deaths caused by infectious and parasitic diseases , the DRSAI accounted for 21.7% of the deaths in the same the Central West (42.9%) and Northeast (27.1%).

These data are part of the Sanitation Atlas – Water Supply and Sewage Disposal released today (24) by the IBGE, which measures the impacts of uneven and not yet widespread sanitation in Brazil. The product is also available at the Interactive Geographic Platform (PGI), where the user can combine data according to their interests and download tables and maps, so as to see data from a spatial perspective.

In the period 2008 to 2019, 11,881,430 DRSAI cases were reorted in Brazil, with 4,877,618 hospitalizations in units of the Unified Health System (SUS). Chagas disease, diarrhea and dysentery were the main causes of death, and accounted for almost 81.5%of the deaths caused by DRSAI in the period. Dengue, zika fever and chikungunya were the third main cause od deaths in the Southeast and Central West in the Southeast and Central West Regions; schistosomiasis, in the Northeast and leptospirosis, in the South Region. “Open sewer adds to the spread of these diseases, so these health conditions and poor sanitation are directly related,” says Daiane Ciriáco, a geographer at the IBGE. 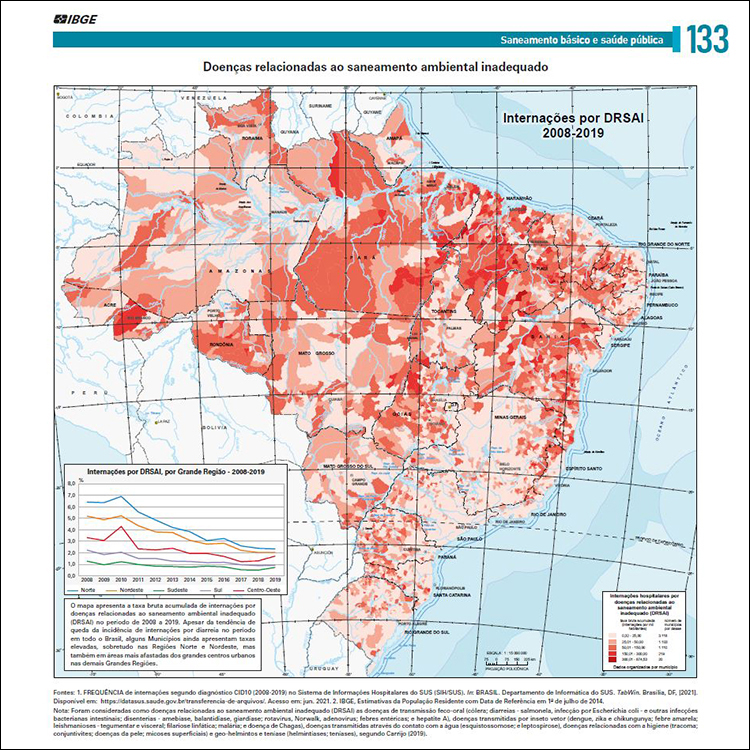 The Atlas also shows that, despite remaining regional differences in the municipal coverage of sewage disposal and water supply services, between 2008 and 2017 there was an increase in the number of municipalities with covered by these services in all the Brazilian Major Regions. The publication presents a territory-based assessment of data in the National Survey of Basic Sanitation 2017 (PNSB), besides other sources in surveys by the IBGE and other institutions, thus providing a linked analysis of the regional differences existing that year with regard to the distribution, coverage and quality of these sanitation services in Brazilian municipalities.

Only three Federation Units (São Paulo, Rio de Janeiro and Federal District) record rates above 85% of households supplied with sewage disposal services – 93.2%, 87.5% and 86.6%, respectively, according to Continuous PNAD. In 17 states (all of them located in the North Region and in seven states of the Northeast Region, except for Pernambuco and Bahia), the rates of housing units supplied with sewage disposal by a general system ranged from 9.9% (cases of Rondônia and Piauí) to 54.0%, (Sergipe).

The reduced coverage of sewage disposal establishes that the main type of pollution or contamination identified in abstraction of fresh water was exactly due to sewage disposal. One of the causes is the lack of investment in the basic sanitation sector, which jeopardizes the quality of water distributed and the effectiveness of the distribution network, thus causing damage to the environment and to public health. The Southeast Region recorded the biggest coverage of sewage disposal per disposal network in 2017: only 3.5% of the municipalities did not have access to sewage disposal. On the other hand, the biggest proportions of municipalities without a sewage disposal network were in the North (83.8%) and in the Central West (57.0%).

“Although the North and Central West are the least populated in the country, they were the only ones that recorded, in the period 2010-2020, estimated relative population increase above the national average (11.0%), with rates of 17.7% and 17.4%, respectively,” adds the geographer Daiane Ciriáco, as she points out the necessity of investments aimed at meeting the growing demand that results from the trend to population increase in both Major Regions. 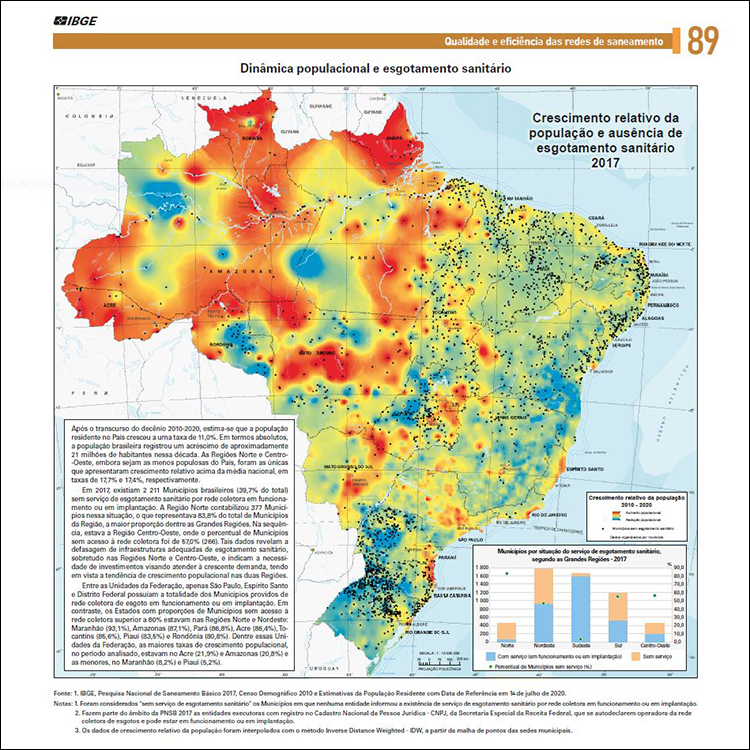 Northeast is most severely affected by water rationing

Produced in partnership with the National Water and Sanitation Agency (ANA), one of the chapters of the Atlas approaches the integration between basic sanitation and the environment. The maps show the biomes and hydrographic basin in Brazil at the first two geographic levels (macroregions and mesoregions) as well as the level of urbanization and demographic density in this part of the territory.

The Hydrographic Mesoregion of the Rio de Janeiro Coast, for example, has 98.5% of its total population in average or big urban concentrations. Then come the hydrographic mesoregion of the São Paulo Coast (94.1%), of the Tietê River (89.5%), where most of the urban concentration of São Paulo can be found, and the Hydrographic Mesoregion of Rio Negro (86.5%), where the city of Manaus is located. In the Northeast Region, location of the Caatinga biome (a feature of the semiarid climate), the Hydrographic Mesoregion Piancó-Piranhas-Açu and the Coast of Rio Grande do Norte and Paraíba stand out resulting from rationing due to scarcity of water in sources in 53.8% and 46.8% of the municipalities with water supply from a general system, respectively. When droughts and dry periods are considered, these percentages reach 69.4% and 49.5% in these two mesoregions.

“The main causes of rationing in these areas is the occurrence of droughts and dry periods and scarcity of water in sources. And, in both cases, the main reason is the natural characteristic of the biome. That is seasonal, historically marked,” says André Polly, manager of the IBGE’s Environment and Territory Dynamics.

In 2017, only 38.0% of the municipalities in the country had municipal basic sanitation planning that encompassed water supply and sewage disposal activities. After ten years of the first legal landmark of the sector, data in PNSB 2017 indicate that the regulation of sanitation, besides poor, is marked by deep regional differences.

Only 46.5% of the municipalities with services provided by a sewage disposal network had a regulatory agency. In the case of water supply services, that percentage reached 69.5%. And only 11 states had the target date of 2030 or sooner, reference year for the Sustainable Development Goals, to have reached universalization of water supply and sewage disposal services.

Inflation hit 0.67% in June after a change of 0.47% in the previous month. The increase was mainly influenced by the increase of 0.80% of the group...