GDP grows above national average in 13 Federation Units in 2019

Twelve states and the Federal Districy rcorded an increase in Gross Domestic Product (GDP) in 2019, above the national average of 1.2%. Tocantins recorded the biggest increase (5.2%), whereas the other four states recorded negative results: Espírito Santo (-3.8%), Pará (-2.3%), Piauí (-0.6%) and Mato Grosso do Sul (-0.5%). The result of Minas Gerais was leveled off. The other nine states recorded increases, but below the national index.

Data come from Regional Accounts 2019, released today (12) by the IBGE and elaborated in partnershop with State Statistical Bodies, State Secretariats and Superintendence of the Manaus Free Trade Zone (Suframa).

“In Tocantins, the increase is related to the increase in volme, by 278.2%, of forestry, fishing and aquaculture, mainly in silviculture, mainly due to the extraction of logged eucalyptus. Also, there was an increase in trade in the period,” says the IBGE's manager of Regional Accounts, Alessandra Poça, who says te state holds 0.5% of participation in national GDP.

In Mato Grosso, second state with biggest increase of GDP in 2019, agriculture, including support to agriculture nd post harvesting activities, increased 12%, having accounted for the biggest contribution in the economy of Mato Grosso that year, with a performance based on crops of upland cotton and sobeans.

“In the analysis of performance throughout the series 2002-2019, Mato Grosso stands out with the biggest change in cumulative volume among the Federation Units, an increase of 130.4% in the period. The performance of the state was closely related to agriculture, due to cotton crops and livestock in the period,” Ms. Poça adds. 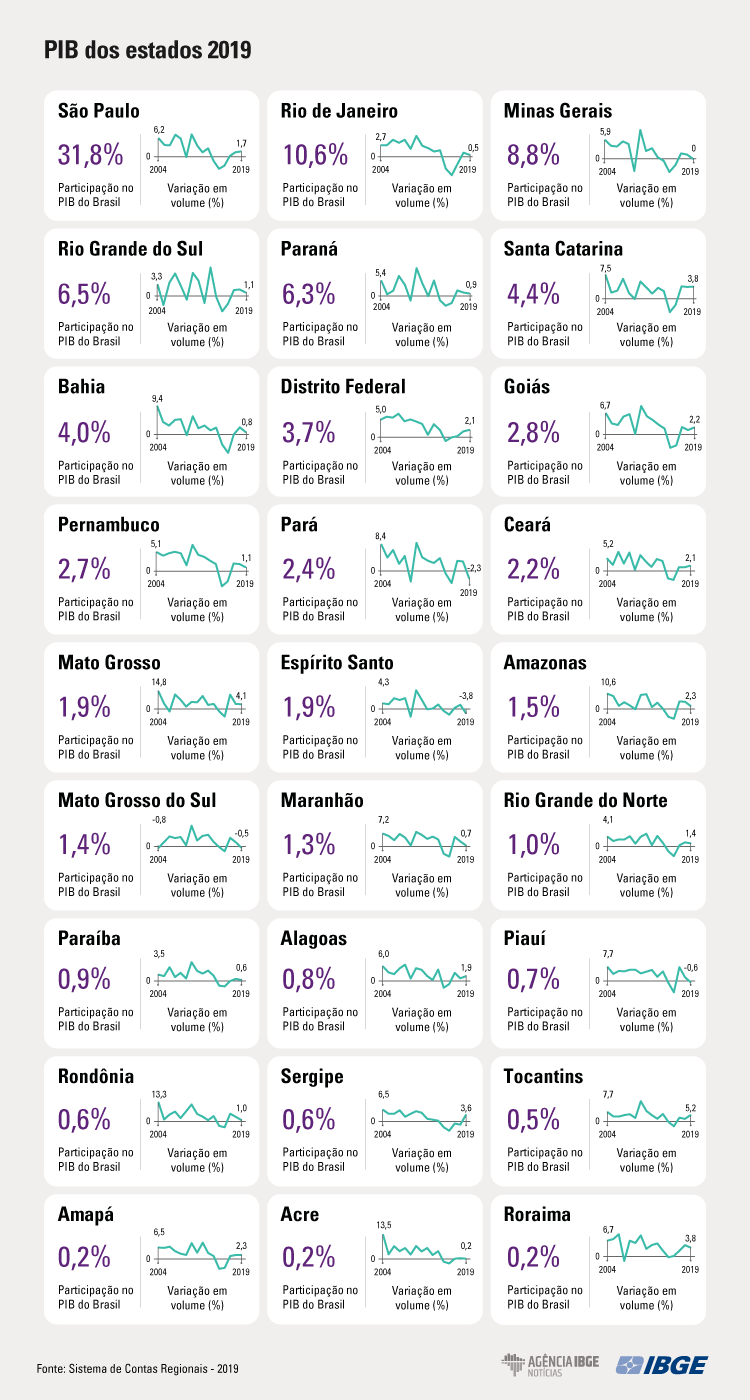 In Espírito Santo and Pará, the retraction of economy was directly related to mining and quarrying industries since in both states there was a decrease in extraction of iron ore. Piaúí recorded a decrease, mainly in agriculture, including support to agriculture and post harvesting, and trade of motor vehicles and motorcycles.

Decrease in Mato Grosso do Sul was rresult of the decline in the production chain of pulp, a prominent segment in the economy of the state, added to negative impacts of soybean crops and raising of cattle and hogs and pigs.

Stability of the economy of Minas Gerais also reflected the scenario of iro agriculture, due to extraction of iron ore, due to the negative biennial cycle of coffee.

“Mineral production recorded a decrease of 45.6% in 2019, in the state, due to the dam break in Brumadinho and to the temporary interruption of the operation of several mines due to monitoring and security reason. That was determining for the change for this group of activities, considering that the other industry aggregates record an expansion in the levl of activity,” says Alessandra Poça.

The share in the GDP of Minas Gerais, in the national economy, however, stayed at 8;8%, same percentage observed in 2017 and 2018, and the state remained in the third position, only after São Paulo and Rio de Janeiro.

The share of the Southeast of the national GDP remains the highest, but recorded a decrease from 53.1% to 53.0%, given the deceleration of performances of economies of Rio de Janeiro e Espírito Santo.

After recording most of the participation among Federation Units for two years in a row, São Paulo, main economy in the country, recorded an increase in the participation of national GDP, with a change from 31.6% in 2018 to 31.8% in 2019. The GDP of São Paulo increased by 1.7% and was estimated at R$ 2.35 trillion.

“The biggest increases in the economy of São Paulo state took place in the group of service activities (2.0%), among which are financial activities, insurance and related services, trade and repair of motor vehicles and motorcycles and professional, scientific and technical, administrative and complementary activities,” Alessandra Poça explains.

GDP per capita for the Federal District exceeds R$ 90 thousand

The Federal District kept the highest per capita GDP in Brazil in 2019 (R$90,742.75), nearly 2.6 times the Brazilian per capita GDP (R$ 35,161.70). In the ranking of Federation units, a highlight is the predominance of states in the Southeast, South and Central West. Among the Federation Units, Federal District, São Paulo and Rio de Janeiro were the only ones to keep their positions throughout the entire series.