IBGE launches cartographic base of Rio Grande do Sul

The IBGE launches today (27) the Continuous Vector Cartographic Base of the State of Rio Grande do Sul in the 1:100,000 scale, in which 1 cm is equivalent to 1 km in the terrain. This is the fifth set of vector geospatial data released by the BC100 Project, which maps the 27 Federation Units in this scale. In addition to Rio Grande do Sul, the states of Goiás, Espírito Santo, Sergipe and the Federal District are completely mapped.

The major applications of the base involve government programs with a territorial approach, providing analyses that demand an overall view of the Federation Units, as well as subsidies for thematic representations – social, economic and environmental – of the territory. It is a basic cartographic document for the sectoral planning of infrastructure works like energy, transportation and communications, among others.

The publication of the Base provides the society with a digital planimetric mapping through a continuous cartographic base compatible with the precision requirements of the National Cartographic System (SCN) and meeting the standards and norms of the Brazilian National Spatial Data Infrastructure (INDE).

The product used as inputs satellite images covering the entire territory of Rio Grande do Sul, data raised in IBGE surveys, the official cartography of the state (Cartographic Base of the State of Rio Grande do Sul in the 1:25,000 scale, launched by the Secretariat of Environment and Infrastructure) and information from partner offices.

“We had a big challenge this time. BC100_RS was entirely produced in remote working,” explains Juliane Silveira, manager of Geodesy and Cartography of the IBGE´s State Unit of Santa Catarina. “We started the emergency remote working in March 2020, due to the pandemic. According to the planning, we had to start this work in April. In less than a month, we adapted the entire production process - which occurred within the IBGE network in a consolidated database - to a decentralized regime, requiring an increased effort of the team. This project broke paradigms of the IBGE´s cartographic production, resulting in a product with the same world-class mark,” complements her.

This digital base is in free format (Shape File, GeoPackage and PostGis database dump) to be used in Geographic Information Systems, being also compatible with free software, and can be accessed here and through services on the IBGE´s Interactive Geographic Platform.

“We anticipate a big benefit for those who need information from regions far from major urban centers,” comments Silveira, highlighting that rural zones benefit more from this mapping, because they do not have data “We managed to mitigate this problem by bringing the same information density to both urban and rural zones,” states the manager.

The product also presents the list of geographic names, in the CSV format, to be viewed in a SIG environment, where its is possible to locate, through their geographic coordinates, all the geographic names that comprise the base, represented by dots. The names in the lists are associated with their respective categories and classes of the elements represented, as well as with their latitude and longitude.

More detailed information about the cartographic base is available in the technical note enclosed in the product, available here. The BC100_RS can also be accessed through INDE and its metadata can be found in the IBGE´s Metadata Directory. 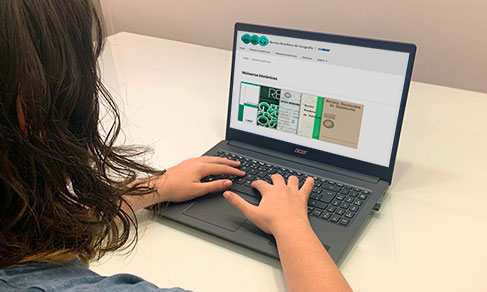 As of today (26), readers of the Journal of Brazilian Geography (RBG) can access old editions of the publication by means of a search engine. All...