Cattle herd increased for the second consecutive year in 2020, after two years of decrease, according to the Municipal Livestock Production (PPM), a survey released today (29) by the IBGE. The production of cow milk also increased, and hit a record of 35.4 billion liters, 1.5% more than in the preceding year. The value of production reached R$ 56.2 billion.

In the case of cattle, the increase of 1.5% reached 218.2 million head, second biggest herd in the time series that started in 1974. The rise of live cattle and calf prices and the growth of exports of beef contributed to the increase of cattle in the year, since the product became more valuable.

“We had been through a period marked by the slaughter of females leading to reduction in the number of animals and calves. That has caused a rise in prices. Today the scenario indicates retention of female cattle. Instead of being slaughtered, they area used to get new offspring, thus recomposing herds,” says Mariana Oliveira, PPM supervisor.

The city of São Félix do Xingu (PA) is still the leader of the bovine ranking in Brazil, with 2.4 million head of cattle and an increase of 5.4% in the year. 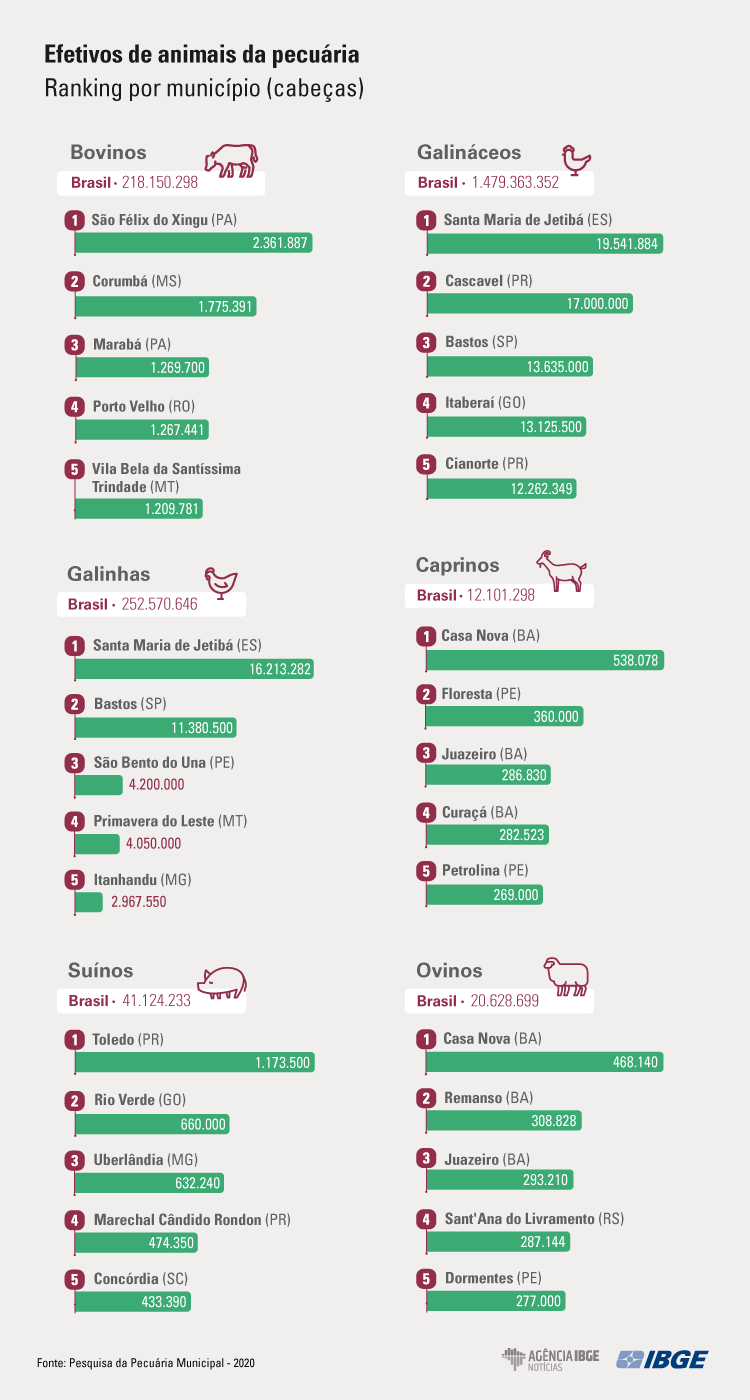 With 35.4 billion liters, milk production hits a record in volume and price

Production of cow’s milk also grew in 2020, and reached 35.4 billion liters, an increase of 1.5% against the previous year. Value of production reached R$ 56.2 billion. This increase resulted from the gain in productivity, since the inventory of 16.2 million milked cows was 0.8% smaller against the previous year. Minas Gerais is still the leader regarding milk production: 9.7 billion liters or 27.3% of the national overall, with an increase of 2.6% a year.

Herd of hogs and pigs increases by 1.4% and amounts to 41.1 million head

Santa Catarina was the leader among states with 7.8 million head, and an increase of 2.8% in the year. Among the municipalities, Toledo (PR) was the main producer, with 1.2 million hogs and pigs, or 2.9% of the national total. Rio Verde (GO), with 660.0 thousand head, and Uberlândia (MG), with 632.2 thousand, also stood out.

The production of hen eggs increased by 3.5% and reached 4.8 billion dozen, with 83.1% from big and medieum sized farms, according to information from POG, IBGE’s survey on egg production. Having generated R$ 17.8 billion, production hit another record in the time series and, since 1999, has grown each year. “In 2020, mainly during the pandemic, eggs were consumed as a cheaper source of protein.” says Ms. Oliveira.

São Paulo remained as the main producer, responsible for 25.6% of the national production of eggs, followed by Paraná (94%) and Minas Gerais (8.5%). No changes were recorded by the main five producing municipalities: The top municipality was Santa Maria de Jetibá (ES), followed by Bastos (SP), Itanhandu (MG), Primavera do Leste (MT) and São Bento do Una (PE).

The total poultry – roosters, hens, chickens, pullets and chicks– amounted to 1.5 billion head, 1.5% bigger than in the previous year, with an increase of 21.7 million. 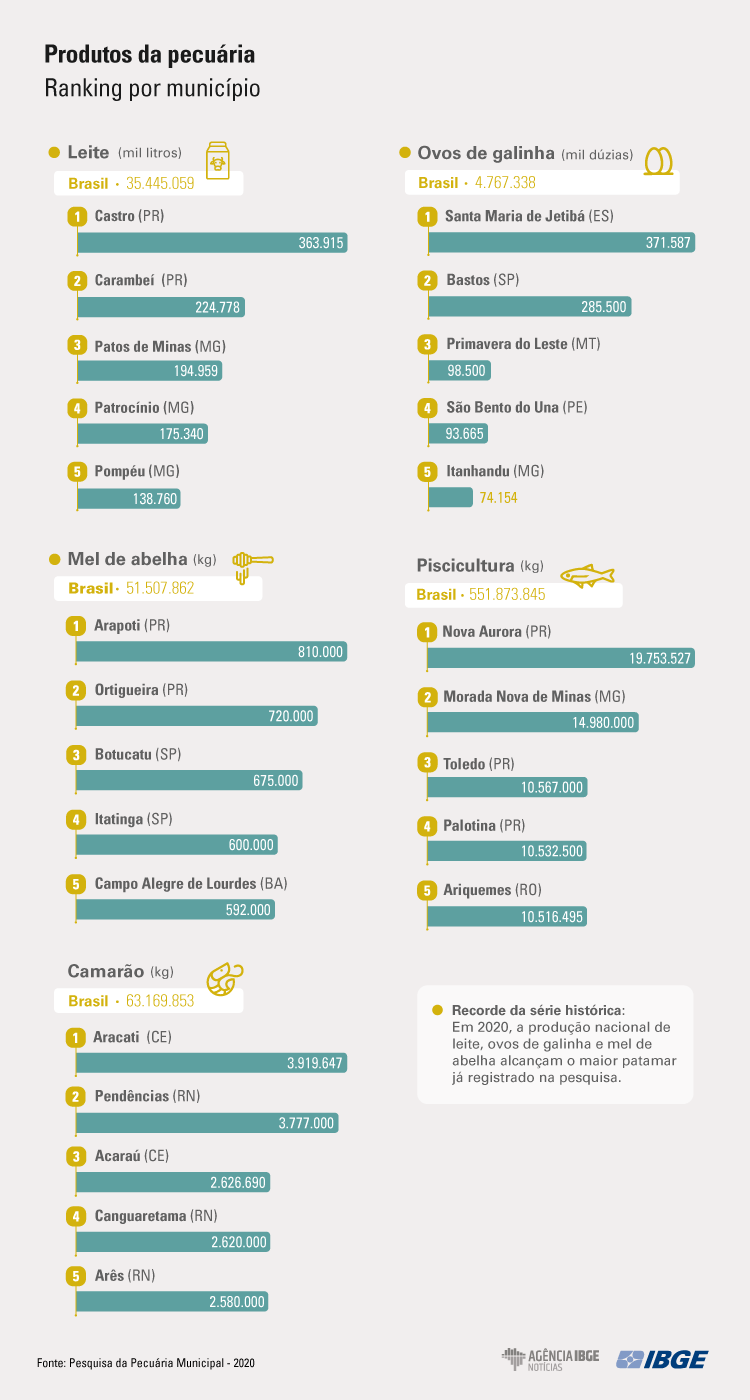 In 2020, the national production of honey reached 51.5 thousand metric tons, an increase of 12.5% against the previous year. Value of production also rose, to R$ 621.5 million. “Exports grew by 52.2%, since they were benefited by the rise of the dollar throughout 2020, which resulted in the supply of honey in the country. That led to a rise of the price, which added to the increase of 26.2% in value of production,” Mariana Oliveira explains.

In 2020, Arapoti (Paraná) was responsible for the biggest production of honey. The municipality surpassed Ortigueira (PR) and Botucatu (SP), which are now second and third ones in the ranking, followed by Itatinga (SP) and Campo Alegre de Lourdes (BA).

Fish farming also advanced 4.3%, and amounted to 551.9 thousand metric tons in 2019. The three main producing states recorded no changes: Paraná, with 25.4% of the national output; São Paulo (10.0%) and Rondônia (8.7%). Nova Aurora (PR), is still the main municipality in terms of production, accounting for 3.6% of the national output and for 14.0% of the state output.

RN and CE hold 68% of the shrimp production, which has increased for 3rd year in a row

Fish farming grew by 14.1% and output amounted to 63.2 thousand metric tons. Value of production reached R$ 1.3 million, an increase of 9.3% against 2019. The Northeast is the leader, with 99.6% of the producion in Brazil. Two highlights in this Major Region are Rio Grande do Norte (34.8%) and Ceará (33.2%). Aracati (CE), after two years as second main producer, went back to the first position, with 3.9 thousand metric tons, an increase of 31.1%. Pendências (RN), after two years as main producer, dropped 4.5% and is now in the second position, with an output of 3.7 thousand metric tons.