According to the Population Estimates released today (27) by the IBGE, the number of Brazilian inhabitants reached 213.3 million in 2021. The study, based on the reference date of July 1st, takes into account all the 5,570 Brazilian municipalities and it is one of the parameters used by the Brazilian Court of Audit (TCU) to calculate the State and Municipal Revenue Sharing Fund, as well as a reference for social, economic and demographic indicators.

The municipality of São Paulo remains the most populous in Brazil, with 12.4 million inhabitants, followed by Rio de Janeiro (6.8 million), Brasília (3.1 million), Salvador (2.9 million) and Fortaleza (2.7 million). Of the 17 Brazilian municipalities with a population over one million inhabitants, 14 are capitals: That group concentrates 21.9% of the population or 46.7 million persons.

On the other hand, the set of 26 capitals plus the Federal District surpasses 50 million inhabitants, representing 23.87% of the Brazilian population in 2021.

Counting only 771 inhabitants, Serra da Saudade (MG) is the Brazilian city with the smallest population. Other three also have less than one thousand inhabitants: Borá (SP), with 839 inhabitants, Araguainha (MT), with 909, and Engenho Velho (RS), with 932 residents. 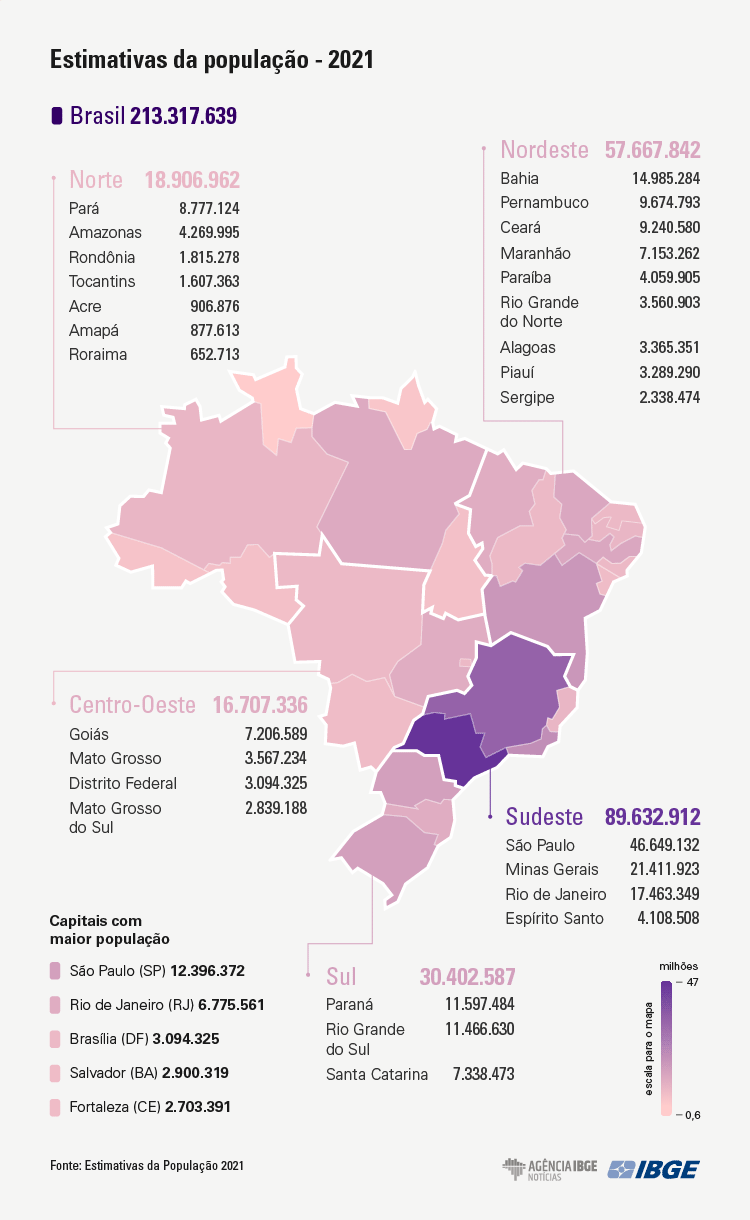 The metropolitan area of São Paulo remains the most populous in Brazil, with 22.04 million inhabitants, followed by the metropolitan areas of Rio de Janeiro (13.19 million) and Belo Horizonte (6.04 million), as well as the Development Integrated Region (RIDE) of the Federal District and Surroundings (4.75 million).

Together, the 28 metropolitan areas, RIDEs and Urban Agglomerations with one million inhabitants have more than 100 million inhabitants, the equivalent to 47.7% of the Brazilian population. Among the major metropolitan areas and RIDEs, 20 of them have as seat a municipality of the capital, whereas eight of them have as seat municipalities of the interior of the states.

Population estimates do not incorporate effects of pandemic

These population estimates do not incorporate the effects of the pandemic. According to Márcio Mitsuo Minamiguchi, IBGE´s manager of Population Estimates and Projections, preliminary data from the Civil Registry and from the Ministry of Health point out to an excess of deaths, mainly among the elderly, and a decrease in births. Changes in the migration flows have possibly happened as well. However, those implications on the population size will be checked in the next Population Census.

“As the pandemic is still underway and due to the lack of new data on migration, which coupled with mortality and fertility are the so-called components of the demographic dynamics, a population projection for the states and the Federal District incorporating the effects of the current health context of the population was still not developed,” explains Minamiguchi.

The manager of the study concludes: “the next Population Census, to be carried out in 2022, will bring not only an update of the population contingents, but will also subsidize future projections, key to understand the implications of the pandemic on the population, not only in the short term, but also in the medium and long term.”