Specialized services increase participation in construction sector between 2010 and 2019

Construction industry generated R$ 288.0 billion in value of real estate development, works and/or services in 2019, with R$ 273.8 for works and/or services (95.1%) and R$ 14.2 billion for real estate development (4.9%). Between 2010 and 2019, the Annual Survey of Construction Industry (PAIC), released today (17) by the IBGE, showed decrease in the share of infrastructure works in the value generated by the sector: from 44.1% to 32.2%. Building construction advanced from 39.1% to 44.2% in the period and took the first position in the ranking. But specialized construction services recorded the biggest increase: from 16.8% to 23.6%.

“Specialized construction services are contracted by big construction companies, for example, for land demolition and preparation, electricity and water installation, painting and finishing Works. That shows a structural change with reduction of verticalization of major construction companies and more specialization,” explains the survey analyst Marcelo Miranda. 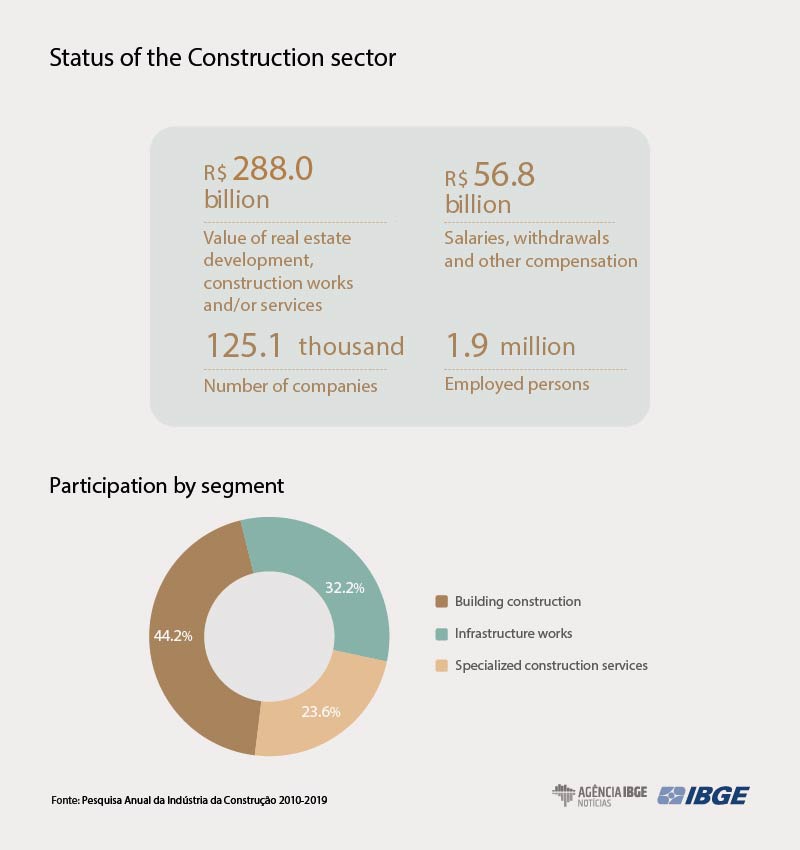 As for workforce, the number of persons employed in construction industry increased by 1.7% in 2019, compared to the previous year, with the generation of 32,472 job posts, first positive result since 2014. Expansion occurred in specialized construction services (58,489 more Jobs, or 9.5%). The segment of Infrastructure works recorded an increase of 3.1% (17,226 jobs). The segment of building construction was the only one to record a decrease of 6.1%, having lost 43,243 vacancies. 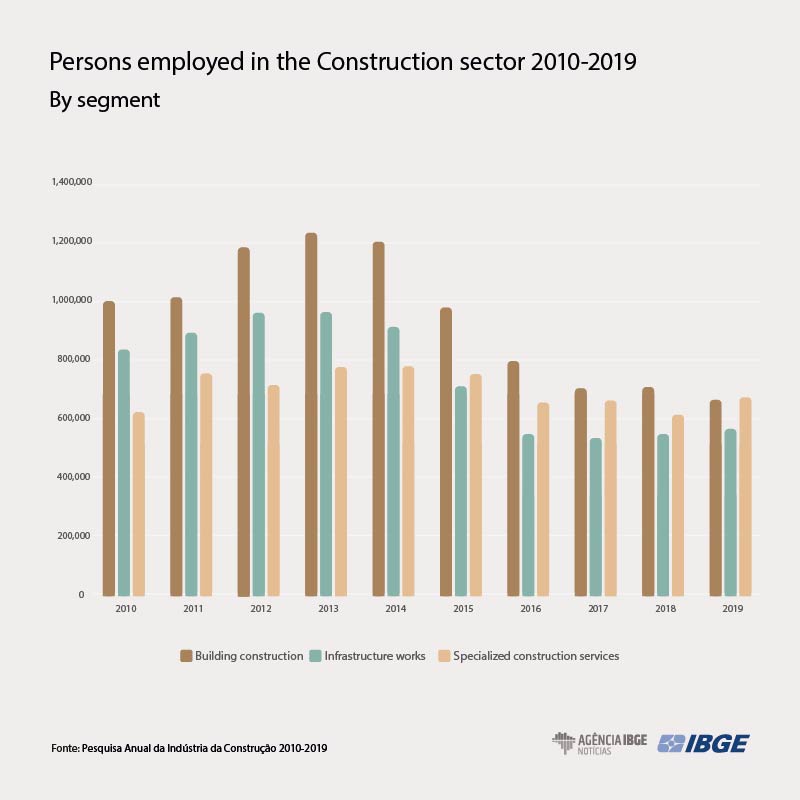 The construction sector encompassed 125.1 thousand active companies at the end of 2019, 481 more than in 2018 and had recorded an increase of 61.4% from 2010, when there were 77.5 thousand companies. The survey analyst, Marcelo Miranda says many important structural changes took place in construction industry, such as reduction of company size – from 32 persons, in 2010, to 15, in 2019 – and a progressive replacement of the vertical organization model in big companies, by specialization, in smaller companies.

Economic concentration also fell by half, having decreased by 6.0 percentage points (p.p.) between 2010 and 2019, with a change from 11.1% to 5.1%. That trend has been observed in PAIC in the last few years and has become clearer when it comes to infrastructure works, the eight biggest companies of which held 25.2% of the value of real estate development, works and/or services in and changed to 11.9% in 2019, a decrease of 13.3 p.p. in the period. In building construction, the eight biggest companies accounted for 7.2% of the value generated by construction in 2019 and there was a slight decrease in concentration (1.7 p.p.) in 10 years. The segment of specialized construction services is the only one that records the opposite: its eight biggest companies accounted for 6.5% of the industry overall in the segment and changed to 7.5%.

“Major infrastructure companies lost space in the sector. As for hiring, we have witnessed a decrease in participation by the public sector. That follows the reduction of infrastructure works, which are often pushed by the government, since they are costly, have a high risk and demand more resources that are of no interest or are beyond the capacity of the private sector,” Mr. Miranda adds.