The Gross Domestic Product - GDP grew 1.2% in the first quarter this year compared with the last quarter last year. This is the third positive figure, after retreating in the first (-2.2%) and second (-9.2%) quarters of 2020, when the economy shrank 4.1%, affected by the pandemic. At current values, the GDP, which is the sum of all goods and services produced in Brazil, reached R$2.048 trillion. 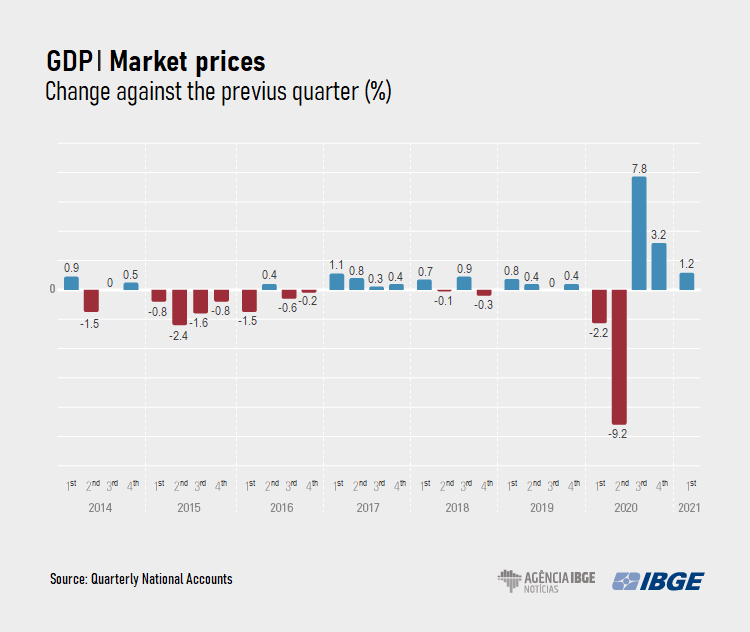 The expansion of the Brazilian economy came from the positive figures from agriculture (5.7%), industry (0.7%) and services (0.4%). "Even with the second wave of the Covid-19 pandemic, the GDP grew in the first quarter because, unlike last year, there were not many restrictions that hindered the economic activities in Brazil," assesses Rebeca Palis, IBGE´s coordinator of National Accounts.

In agriculture, the rise was leveraged by the improvement in the productivity and in the performance of some products, especially soybeans, which has the highest weight in the Brazilian crop and a forecast of a record harvest this year.

In the industrial activity, the advance came from mining and quarrying industries (3.2%). Construction (2.1%) and the activity of electricity and gas, water, sewage and waste management activities (0.9%) also rose. The only negative figure came from manufacturing industries (-0.5%). "All the sub-sectors of industry rose, except the manufacturing industry, which has the highest weight. Impacted by the food industry, it affected the consumption of the households," tells Palis.

In services, which contribute with 73% of the GDP, transportation, storage and mailing (3.6%), financial intermediation and insurance (1.7%), information and communication (1.4%), trade (1.2%) and real estate activities (1.0%) registered positive figures. Other services remained stable (0.1%).

"The only negative change came from public administration, health and education (-0.6%). There has not been many public bids to fill the job positions and workers are retiring, reducing the employment in the sector. It affects the contribution of the activity to the value added," explains the coordinator of National Accounts. 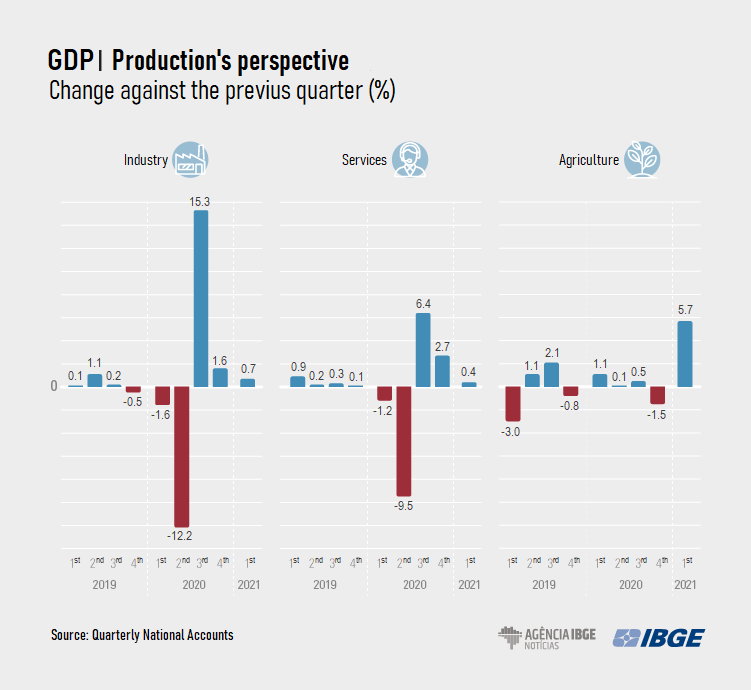 Consumption of households remains stable and that of government, reduces

The effects of the pandemic influenced the stability in the consumption of households (-0.1%) in the first quarter this year over the fourth quarter. The consumption of government dropped 0.8%.

"The increase in the inflation mainly influenced the consumption of food along this period. As well as a slow labor market. Payment of government programs to families, like the emergency aid, reduced significantly," details Rebeca Palis, noting that, on the other hand, credit for natural persons increased.

Investments (Gross Fixed Capital Formation) grew 4.6%, influenced by the increase in the domestic production of capital goods and software development, the rise in construction and the impacts of Repetro, a special customs procedure that allows the oil and gas sector to acquire capital goods without paying federal taxes.

The Brazilian trade balance rose 3.7% in exports of goods and services, whereas imports grew 11.6% over the fourth quarter of 2020. "In imports, pharmochemicals for the production of vaccines against Covid-19, electrical devices and machinery, and fabricated metal products stood out. Among exports, food products and motor vehicles stood out. 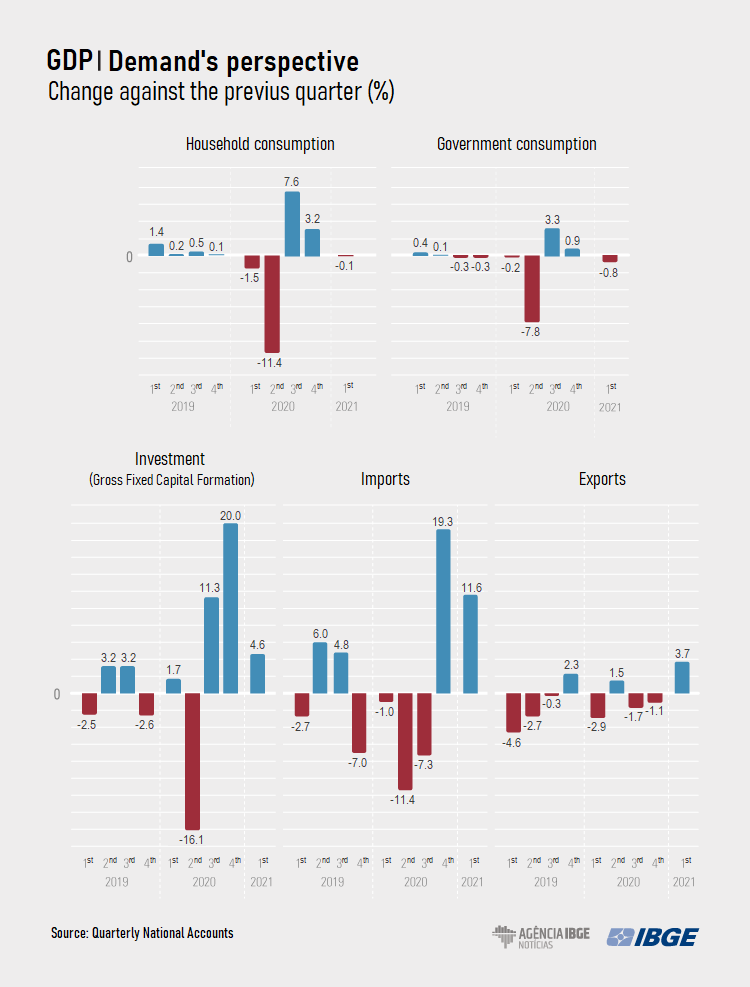 Agriculture and industry grow, but services drop in the annual comparison

In the annual comparison, the GDP grew 1.0% in the first quarter this year, with a rise of 5.2% in agriculture and of 3.0% in industry. On the other hand, services retreated 0.8%. "The activities of other services, which are mainly face-to-face, and public administration pressed the result of services downward. This is a sector that still suffers the effects of the pandemic," says Rebeca Palis.

Under the point of view of expenses, investments (Gross Fixed Capital Formation) stood out with a growth of 17.0%, the highest rate since the second quarter of 2010. Consumption of households retreated 1.7%, explained by the increase in the inflation and reflections of the pandemic that negatively affected the labor market, reducing the number of job positions and the real wage bill. Consumption of government also retreated (-4.9%).

Concerning the foreign sector, exports rose 0.8%, whereas imports advanced 7.7% over the first quarter of 2020.

The System of National Accounts presents the current values and indexes of volume on a quarterly basis for the Gross Domestic Product - GDP at market prices, taxes on products, value added at basic prices, personal consumption, government consumption, gross fixed capital formation, change in stocks, exports and imports of goods and services. The survey started in 1988 in IBGE and it was restructured from 1998 onwards, when its results were integrated into the System of National Accounts, of annual periodicity.